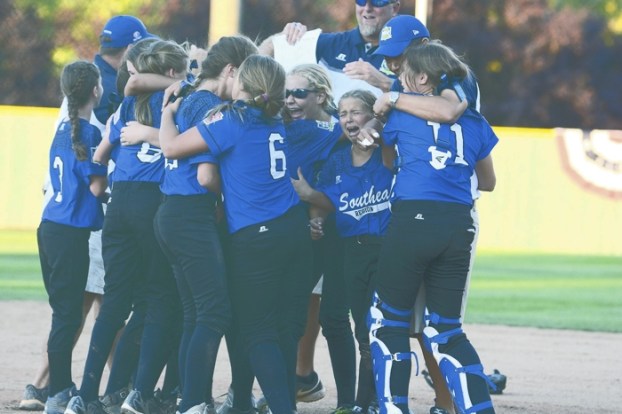 Thankful for sports and more

Thanksgiving Day … there’s a lot to be thankful for in the sports world.

On a personal note, I am thankful that The Salisbury Post entrusted me with the sports editorship. I appreciate beyond words that publisher Greg Anderson and editor Elizabeth Cook gave this old guy a chance to have a second career in something that I truly enjoy.
I am also thankful for:
• The Rowan Little League Girls Softball World Champs (no surprise that they head the list). It’s been three month since the local girls shocked the world, but like a lot of people said at the time, “this will last forever.”
Not only did this team get it done on the field in Portland, the girls came back and have been so engaging and gracious while making their countless appearances.
These girls are in middle school and had to be getting tired of the hectic schedule. But you wouldn’t know it, as they have charmed everyone they’ve met as small town celebrities.
• Winning football teams. Other than West Rowan and A.L. Brown, the local high school teams had a tough year. But the two college teams, Catawba and Livingstone, both had winning seasons. The Blue Bears finished strong and brought the most excitement seen on Monroe Street in 17 years. The Indians went even further, winning a conference championship and making the D2 playoffs.
• Carolina Panthers are 10-0. While there are plenty of local fans, myself included, who have favorite teams other than the Panthers (Steelers, Redskins, Cowboys, Patriots … and in my case, the Chiefs), you have to admit the majority do claim the Panthers — at least when they’re winning! It’s great to see the excitement with people wearing the team apparel and hear the fans talk about everything from Cam Newton dancing to who’ll have playoff tickets available.
Carolina plays this afternoon against the Cowboys to add more fun to your Thanksgiving Day.
• Stephen Curry. Sure it’s a bonus that Curry is from Charlotte and played at Davidson College. But the classy kid that was told he was too small to be a factor in the NBA is now King of the World. Curry’s team is defending champions and 16-0 this season. He’s as much fun to watch as Michael Jordan was 25 years ago. He can’t dunk like MJ, but he shoots it better. Did you hear that Curry once made 77 consecutive three-pointers in practice?
• ESPN, NFL, MLB and all of the other sports networks. For a guy who grew up in the late 1960s and early 1970s, having channels like these would have been beyond my wildest dreams. We would wait all week just for NBC’s baseball game of the week. You could only hope that it was a team you liked, because one was all you got. I also remember an hour show on Saturday mornings, “This Week in the NFL,” where you got a 2-3 minute highlight package from all of the games, now almost a week old. That was it, except for the local news sports segment.
• High school sports. Being in the college ranks for 30 years, I was reintroduced to the dedication and passion of the kids and coaches and parents and fans. Sometimes it is over the top, but it usually comes from the deep love for those school colors. Like the Beach Boys’ song says, “Be True to Your School,” and believe me, we hear about it if readers think their school doesn’t get enough coverage.
• Mike London. Speaking of high school sports, my colleague knows more about that subject than anyone. He loves high school sports in Rowan and Cabarrus counties and that caring comes through in his writing. He’s got you covered, high school student athletes. Mike is an amazing copy machine, churning out multiple stories almost every day, so I’m very thankful for that. The UNC grad who prefers Duke over the Tar Heels doesn’t believe in days off, either.
• Sports photography. Not only do I get to see outstanding photos from the Associated Press on a daily basis, but I see them in-house as well. Jon C. Lakey and Wayne Hinshaw, the Post’s main two photographers, are simply amazing with the quality of action photos that they provide. They give me 10 outstanding shots and I have room on the page for two or three. We’re so fortunate to have Jon and Wayne, as well as James Sipes, taking our photos.
• Golf. I have rediscovered this great game as well, one that you can love and hate at the same time. I’m very average, but my game has improved enough that I can finally enjoy it and at least feel like I know what I’m doing. Of course, just when you think you’ve figured it out is when the golf gods get you, like … “I didn’t see that limb hanging down there!” or “I hit a great shot … why can’t I find my ball?”
And again, something personal to close on:
• I’m thankful for Caleb Hanby. You’ve never heard of him but he was a soccer player, a big, strong one who played in high school in Michigan and later, for a club in Nashville, Tenn. Caleb was my son-in-law for one week, before cancer claimed him at 28 years old on Oct. 1. I’m so thankful that Caleb touched my daughter, Bethany, and our family in such a special way. He was such an awesome guy.
Our lives, much less holidays, will never be the same.
You Might Like