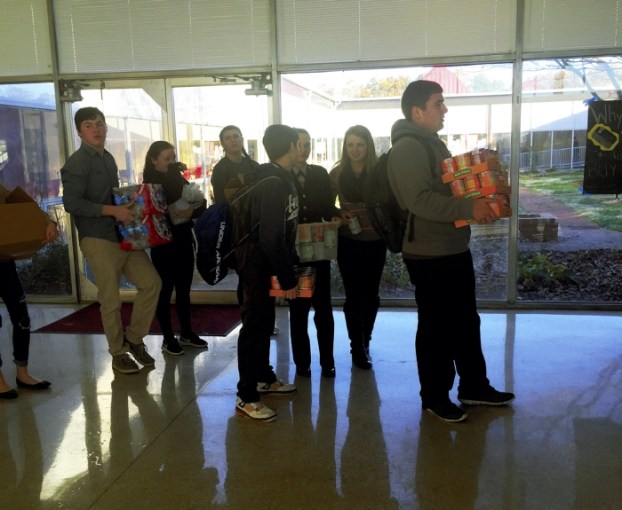 Students line up to turn in their items for donation to Main Street Mission on Tuesday. Amanda Raymond/Salisbury Post South Rowan High School students donated water, canned goods, pasta, soap and other items to the Main Street Mission of China Grove for the South Gives – 100 Ways to Give Back project.

During the school’s South Block program, which is similar to a time for advisor/advisee interaction, students were tasked with collecting at least 100 of a specific item to donate to the Main Street Mission food pantry for the month of November. Some collected 100 cans of soup while others collected 100 toothbrushes.

About 44 South Block classes participated, and many classes surpassed the 100 collection goal.

During the South Block period on Tuesday, the students brought all of the items they collected to the Sophomore Lobby of the school. Students then loaded all of the items into a truck to be taken to Main Street Mission.

Amy Wise, assistant principal, said one of the themes of South Block is iCare, a time where students think of ways to give back to the school and community.

“For the kids, we just want to teach them the goal of giving to help others and to give back because all of them have been helped in some way,” Wise said.

The students also decorated the door of their classroom to reflect the item they collected. The classrooms with the best door decoration won an ice cream party.

“That competitive spirit gets them going as well,” Wise said.

Student Abygail Rohletter, who helped donate baby food, said the project was a lot of fun.

“You get to give back and it was cool picking a topic and decorating your door for what you got to bring in,” she said.

“Just doing all this means a lot to other people and giving back to the community is always a good thing,” student Tristan Wyatt, who helped donate soap, said.

Student Preston Tadlock, who helped collect cans of corn, said doing projects like this brings issues of hunger and poverty into the students’ backyards.

‘We see people who don’t have things in other countries ,but then I think when we do stuff like this it really brings it in to show, wow, there are people right here in small town China Grove and Landis that struggle,” he said.

Assistant Principal Amie Caudle said the project was a great way to unite the school.

“It really brings the whole school together for a common purpose,” Caudle said.