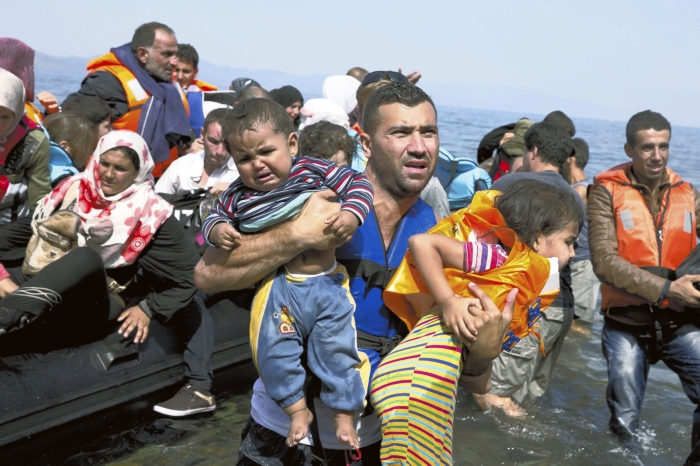 Syrian refugees arrive aboard a dinghy after crossing from Turkey to the island of Lesbos, Greece in September. AP photo

How bad would conditions have to be in the United States for you to pack a suitcase, round up family members and abandon your home for good?

You may have threatened to leave the country if a candidate you disliked won the presidential election. That was just talk. Millions of Syrians, however, have voted with their feet to reject what has been happening in their country. They have left everything behind.

Their exodus is on a scale not seen since the Rwandan genocide of two decades ago. Life expectancy in Syria dropped from 74.7 years in 2005, before the country’s brutal civil war, to 55.7 today, according to Vox.com. The quality of life? Apparently it has all but disappeared.

Fortunately, U.S. humanitarian groups routinely work with families who seek a safe place to start a new life — groups such as Lutheran Services Carolinas, based in Salisbury, and Church World Service, with offices in Charlotte, Greensboro and Durham. Most of us started grappling with the refugee issue just a few months ago. These groups have been at it for years. They have witnessed the rigorous, drawn-out screening process families go through to get into the United States.

We are human; we fear the unknown. Better safe than sorry, the saying goes. This situation is too complex to boil down to a idiom, though. When so many other people cross our borders every day as tourists and students, how safe is it to focus all our fears on desperate refugees? Let’s talk about the vetting process and review the nation’s security needs, without turning our backs on Syrian refugees.