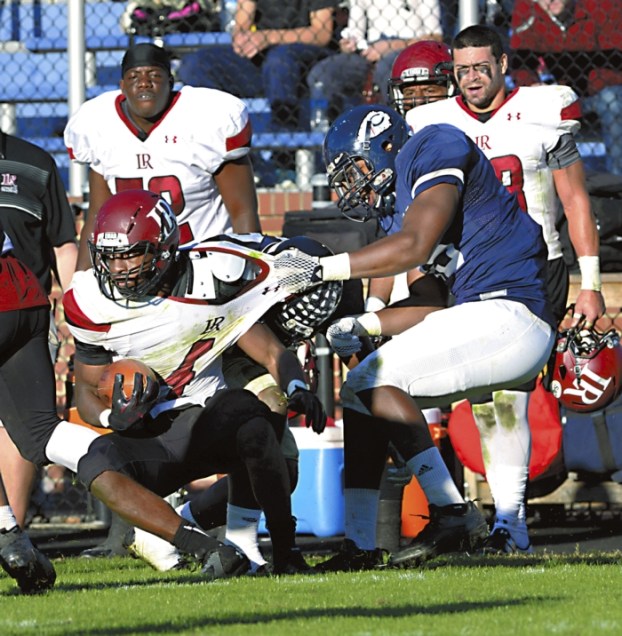 Catawba 's Kyle Kitchens 45 pulls Calvin Edwards 4 down my his jersey. Photo by Wayne Hinshaw, for the Salisbury Post

SALISBURY — Following Catawba’s 28-14 victory against Lenoir-Rhyne on Saturday, head coach Curtis Walker informed outside linebacker Kyle Kitchens that he would be the Indians’ nominee for South Atlantic Conference Defensive Player of the Year.
“That’s great, Coach,” Kitchens told Walker. “But we got us a ring. That’s all that matters.”
On Tuesday, the sophomore found out he’ll get a plaque to go with his ring. He was a clear-cut choice as SAC Defensive Player of the Year.
“He wasn’t quite unanimous,” Walker said with a smile. “But that was because I couldn’t vote for my own player.”
Kitchens, 6-foot-2, 205 pounds, is a motor-mouth with a high motor. He was the dominant athlete on a frequently dominant defense with 21 tackles for loss, 11 sacks, three fumble recoveries and two forced fumbles. He also had a 90-yard interception return that was the pivotal play in a home win against Mars Hill.
He had tackles for loss in 10 different games and had sacks in eight games. He had three sacks in the homecoming win against UNC Pembroke.
Catawba ranks fifth nationally in scoring defense (14.8 points per game), and Kitchens ranks among the top 15 D-II players in sacks and tackles for loss.
Kitchens started as a true freshman in 2014 and performed well with five sacks and 10 tackles for loss.
“We knew when we recruited him that he was going to be a good player for us,” Walker said. “But we honestly didn’t know he would be this good, not this quickly. He was good last year. He was pretty special this year.”
Kitchens thanked people who made the award possible for about five minutes at Tuesday’s press conference. He started by thanking starting linebackers Jamal Lackey, Michael Peppers and Trey Evans and reserve linebackers Ed Robinson IV and C.J. Jones.
“I have to thank the defensive linemen for keeping guys off me and I have to thank our defensive backs for the coverage that lets me get sacks,” Kitchens said. “I’ve got to thank our Devo (scout) team for the work they do to help us prepare for each opponent, and I’ve got to thank the coaches that push us to be the best we can be and for continuing to push us.”
Walker, honored as SAC Coach of the Year, is one of those coaches that is pushing. He’s a former linebacker and works closely with the linebacking corps.
“It’s great to have a group at that position like we have right now,” Walker said. “They remind me so much of that great group of linebackers (Darris Morris, Todd McComb, Shawn Sanders and Shawn McBride) we had at Catawba 15 years ago when I was the linebackers coach.”
Michael Bonuccelli is a Catawba coach who isn’t a household name, but he works with the outside linebackers and has played a large role in Kitchens’ development. Walker credits Bonuccelli with keeping Kitchens humble.
“Breaking down film with Coach Bono is great preparation for every game,” Kitchens said. “It really helps me be in position to make plays.”
Kitchens’ teammates get a kick out of his upbeat nature. They enjoy his non-stop chatter almost as much as his non-stop tackling.
“He’s really good,” All-SAC defensive end C.J. Barksdale said. “He’s a very strong pass-rusher and he gets to the ball.”
Added All-SAC cornerback Case Woodard: “Kyle talks a lot, but that’s a part of who he is and that’s what keeps him loose. He’s got a real knack for finding the football.”
Walker informed Kitchens on Monday that he’d won the Player of the Year vote.
“I was excited for myself,” Kitchens said cheerfully.
Walker is excited about Kitchens. At Coastal Carolina, he coached a linebacker, Andrae Jacobs, who was the 2010 Big South Defensive Player of the Year as a sophomore, and he believes Kitchens is in the same mold — a great young player who will get even better.
“Kyle really enjoys the game,” Walker said. “He gets inside the game mentally and physically. He has fun in practice but he always goes hard. That effort just seems to spill over into the games.”
Catawba finally cracked the American Football Coaches Association Top 25 this week — at No. 25.
Asked for his reaction to finally being ranked, Kitchens spoke candidly
“I don’t think anyone wants to be No. 25,” he said. “We want to be No. 1.”
•••
NOTES: Third-seeded Catawba will take on No. 23 Tuskegee, the No. 6 seed, in a first-round playoff game on Saturday at Shuford Stadium. Kickoff will be at 1 p.m. … In addition to the big honors for Walker and Kitchens, Barksdale, Woodard and offensive tackle Lewis McCormick were named first team All-SAC. The second All-SAC team includes Catawba cornerback Mark McDaniel, nose guard Jonathan Jean, linebacker Lackey and running back Cary Littlejohn, who has 976 rushing yards. … Six of the eight Catawba players who made All-SAC are defensive players. Walker would’ve liked to have seen a few more make it. He nominated 10 defensive players.

By Mike London mike.london@salisburypost.com SPENCER — Two newcomers were the story as North Rowan’s girls opened with a 78-49 win... read more