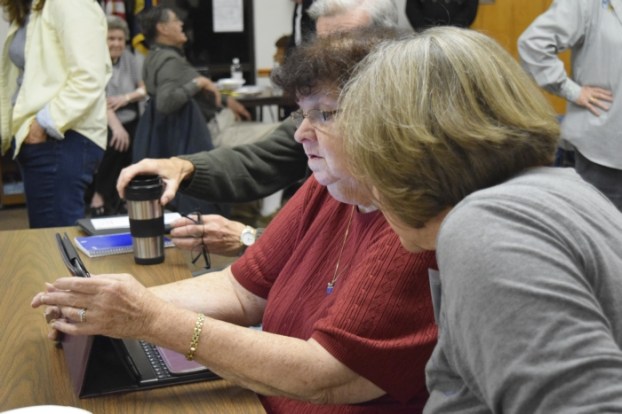 Judi Honbarger, right, walks Mary Coffey through clearing out space on her tablet. Laurels to the people at Rufty-Holmes Senior Center who refuse to let technology pass them by; they’re active in  the center’s Computer Club. People who use computers at work every day cannot appreciate how intimidating others find the Information Age’s barrage of new terms and technology. Some joke about posting stuff on “MyFace,” but the disconnect goes back well before Facebook took over the world. The Internet, WiFi, email, search engines and social media are all Greek to a segment of the older population. That may suit them just fine; computers are not for everyone. But an increasing array of services require an Internet connection in the household, and countless commercials and ads say “for more information, go to our website.” The Computer Club members are not going gently into that Luddite night; they’re keeping up and helping their peers do the same.

Laurels to the U.S. Postal Service for finally seeing the wisdom of not requiring Granite Quarry residents to use Salisbury addresses. Granite Quarry officials have sought this change for years, only to be told change was out of the question because the mail was being handled by the Salisbury post office. Somehow U.S. Rep. Richard Hudson, R-Concord, convinced Postal Service officials to relent. And, irony of ironies, he said he was pleased by the agency’s swift response. Whatever. At any rate, residents of the town have the option of using either the Salisbury or Granite Quarry address, as long as they use the 28146 ZIP code. Thanks to Hudson for intervening and the Postal Service for changing its database to make this possible. Now we know what it takes to get the attention of the Postal Service — political clout.

Laurels to area veterans, who deserved every one of the many Veterans Day observances and programs held here this week. Let’s hope this display of respect prompts more promising young people from all parts of our society to sign up for service.  Our country needs to find a way to bridge the divide between the military and the general public beyond parades and periodic patriotic performances.

Talkback: What online readers stay about …

… Kenerly on three who died: ‘Our most precious asset’ My deepest sympathy to the family of Charles Lee. Also,... read more