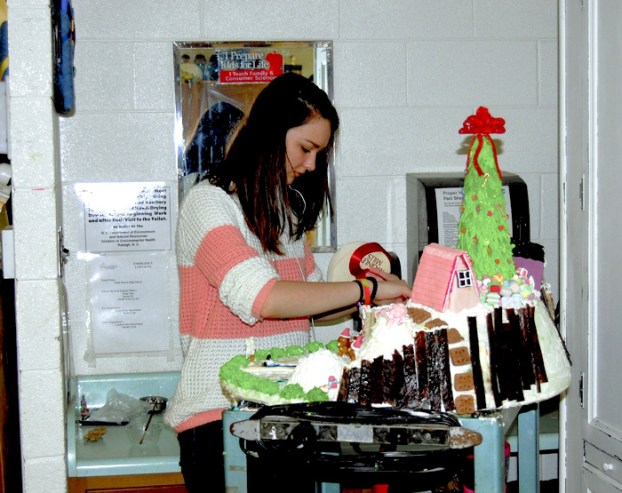 Amanda Raymond/Salisbury Post Rock the House Club member Aubree Pugh sprinkled snow on the bushes of her dog park gingerbread creation on Thursday. South Rowan students will be entering their gingerbread creations in the 2015 National Gingerbread House Competition this weekend in Asheville. Amanda Raymond/Salisbury Post South Rowan students will be entering their gingerbread creations in the 2015 National Gingerbread House Competition this weekend in Asheville. The entries do not have to be houses, but they must be at least 75 percent gingerbread.

Gingerbread creations in the shapes of a turtle, peacock and castle are scattered throughout Sharon Edwards’ classroom.

Edwards does teach a cooking class, but these creations are not for eating — they’re for competing. South Rowan students are preparing their entries for the 2015 National Gingerbread House Competition taking place this weekend at the Omni Grove Park Inn in Asheville.

The Rock the House club has about 15 members, according to Edwards, a family and consumer science teacher.

The students were still working on the finishing touches of their creations on Thursday. Edwards said they work a little bit during school and a lot after school, sometimes working as late as 6 p.m.

“They worked all day yesterday, and they’ve been working since before Labor Day,” Edwards said.

The students are entering the most entries they’ve ever had with five creations this year: a peacock colored with greens and blues, “Aloha Holiday” with sand snowmen on the beach, a castle that will eventually have Santa Claus stuck in one of the windows, “Honu,” a sea turtle and “A Dog’s Life” with a dog park theme. Last year, all three of the club’s entries got top 10 ribbons, and the school has always gotten a ribbon for at least one entry when competing in the past.

The competition is a tough one, with judges who represent nationally distinguished food, arts and media professionals, according to the competition’s website. And the competitors are fierce, as well. Although the name of the competition says gingerbread house, entries are not limited to houses. Some come with entries like Russian nesting dolls, sports stadiums and Eiffel Towers. The main structure has to be at least 75 percent gingerbread and almost all of the materials used to build the creation must be edible.

Entries are judged on overall appearance, originality and creativity, difficulty, precision and consistency of theme.

Club member Aubree Pugh, who created the “A Dog’s Life” entry, said the club is good practice for a future career.

“I’ve always dreamed of decorating stuff, and I considered becoming a professional baker and decorating cakes and stuff,” she said.

Club member Bradley Samples, who helped make the peacock, said the club has been a good learning experience for him.

“I learned a lot about gingerbread and fondant making because I was not very good at it at the beginning of this club, but I’ve gotten better. I’ve improved a lot,” he said.

Club member Abby Blume said her group struggled with finding a concept for their creation, but they finally decided to go with the sea turtle.

“We were going to do a ’50s theme, but that kind of fell apart, and we really didn’t know what to do,” she said. “And then we just came up with the sea turtle.”

Edwards said since the students sometimes have to come in and work on the creations at different times than the rest of their partners, the club is a great way for the students to learn how to work on a project together.

“They’ve had some difficulties with it, but they’ve really grown,” she said.

Edwards also said that, according to a gingerbread Facebook page, competitors have been struggling with their gingerbread this year because of the weather.

“Because of all the rain, gingerbread is sagging,” she said.

Edwards said after the competition, the students donate their creations to local schools and libraries to be displayed. Last year, the club donated their owl creation to Enochville Elementary School to match their wise owl mascot.

The judging for the competition will take place on Monday.

Edwards said she is proud of her students and what they have accomplished.

“They’re terrific kids, and I just love them to death,” she said.

By Mike London mike.london@salisburypost.com LANDIS — The whole school poured into the gym Thursday afternoon to celebrate what amounted to... read more