Prep Soccer: Hornets have to fight for third-round win 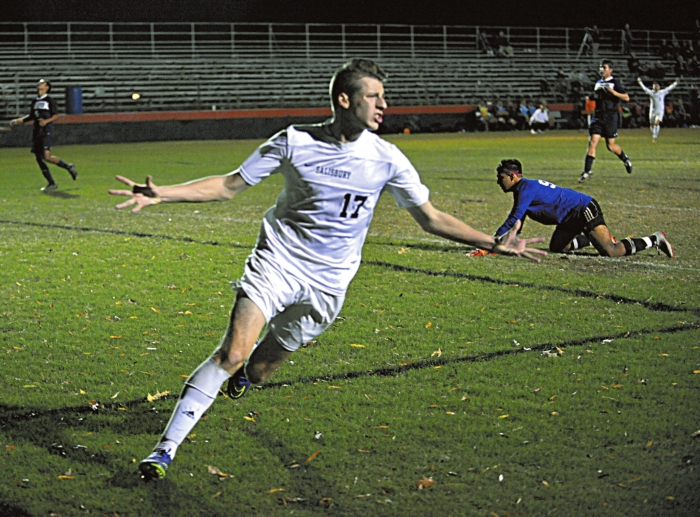 Salisbury's Landon Goodman celebrating after scoring the first goal in the game. Photo by Wayne Hinshaw, for the Salisbury Post

SALISBURY — It had the tension of a regional final, but all a 3-2 overtime win against Monroe’s Central Academy of Technology & Arts (CATA) meant was that Salisbury’s soccer team had survived Thursday’s third round.
“We’re only at the halfway point in the (2A) playoffs, but that probably was the toughest team we’ve faced all year,” relieved Salisbury scoring machine Landon Goodman said. “We kept our heads. We played strong.”
Goodman scored two goals, including a remarkable, sliding — and deciding — goal at Ludwig Stadium with 5:37 left in the second 10-minute overtime period.
“He only had about a 3-foot area to work with to put that one in the back of the net,” Salisbury coach Matt Parrish said. “But the big players show up in the biggest games.”
Goodman’s goals were his 63rd and 64th, the fifth-highest season total in state history. He has 111 career goals.
The winning goal came on a smart assist by Melvin Bonilla.
Just 15 seconds after Salisbury keeper Arturo Ramirez had been forced to make a save, Goodman pushed the ball to Bonilla on his left. Bonilla instinctively tapped the ball right back to Goodman, a quick give-and-go exchange that gave Goodman, who draws fierce defensive attention, an opportunity.
He cashed it in against a goalkeeper (Brandon Melchor) Parrish said was, by far, the best Salisbury has been up against. Melchor denied Goodman, Matt Washko and Andrew Kalogeromitros on several occasions.
“I was thinking Melvin was going to go himself,” Goodman said. “But then he gave me that great return pass. It was in the back of my mind that we really wanted it to end this in that second overtime. We didn’t want to go to a golden goal.”
It was scoreless for 21 minutes. The Hornets broke through on a set piece. Joshua Lynch, who leads top-seeded Salisbury (24-0-2) in assists, sent the ball ahead to Goodman in space 30 yards from the goal. Lynch’s kick traveled 20 yards in the air, but it was so precise, it was like he’d handed the ball to Goodman.
“Great pass, and I was just able to out-run them and put it top corner, rear post,” Goodman said. “I had a doughnut the first time we played CATA, so that one felt good.”
Salisbury’s 1-0 lead lasted two minutes. After a handball call and a penalty kick, it was 1-1.
Nine minutes into the second half, the Hornets seized a 2-1 lead on an individual effort by All-State defender Cristian Uribe. Lynch made a throw-in from the right side that led to the goal.
“I headed the throw-in and the ball was deflected, but then it came right back to me right of the goal,” Uribe said. “I scored bottom left.”
CATA responded five minutes later. Ramirez got caught on a “tweener,” when he charged out aggressively, and CATA chipped in a tying goal over his head.
“With the exception of two lapses, we played a solid match, but they leveled things twice immediately after we scored,” Parrish said. “When we played CATA a few weeks ago (Salisbury won 2-1), I told their coach (Jay Niessner) I hoped we wouldn’t see him in the playoffs, but I expected that we would. We were prepared to go back-and-forth for 80 minutes with them, but then it turned out to be back-and-forth for 100.”
In the first overtime, Ramirez got an arm up to deflect a CATA shot inches over the crossbar.
Goodman had a great chance to win it, but his point-blank blast stayed low with 7:30 on the clock, and Melchor gobbled it up.
Kalogeromitros watched a shot sail a bit high with 5:43 remaining.
Tension and apprehension were building, but then Bonilla and Goodman made it happen for the Hornets in the second overtime.
“Having played them before was an advantage, but it also was a disadvantage,” Uribe said. “We knew what they could do, but they also knew a lot about us. Very tough match, but we got the win. That’s what matters. Now it’s on to the next round.”
It was an emotional win that ended with Kalogeromitros booting the ball skyward and Hornets punching the air.
Ninth-seeded CATA (15-8-4) ended Salisbury’s string of five straight shutouts. No one had scored against the Hornets since CATA’s 2-1 loss at Ludwig Stadium on Oct. 22.
Next for the Hornets is another home game on Saturday — against 13th-seeded Hendersonville. Game time will be announced on Friday.