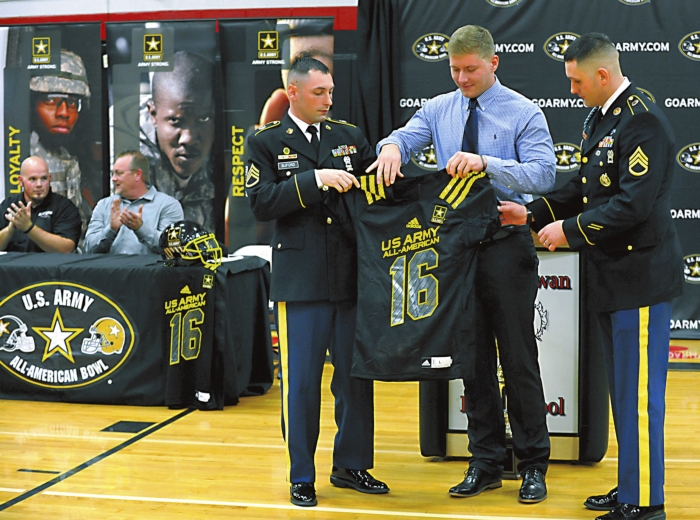 Staff Sgt Charles Buford, Marshall Long, and Staff Sgt Chad Hendrix. The entire South Rowan High student body with band and cheerleaders came to the gym to see football player and punter Marshall Long receive recognition and a jersey as he was named a US Army All-American player. photo by Wayne Hinshaw, for the Salisbury Post

LANDIS — The whole school poured into the gym Thursday afternoon to celebrate what amounted to South Rowan’s first football victory of the season.
Principal Kelly Withers declared it “one of the biggest days in the history of South Rowan,” and no one argued with her.
The band was there. The cheerleaders were there. The coaches were there. The U.S. Army was there.
Basically, it was a pep rally to celebrate one humble, 6-foot-3, 205-pound guy.
Out of a million or so American high school football players, South punter Marshall Long was one of 90 selected to play in the U.S. Army All-American Bowl in San Antonio’s Alamodome.
The game has an East vs. West format and will be televised live on NBC at 1 p.m. EST on Jan. 9.
Students roared when a staff sergeant handed Long a black “No. 16” jersey, heavily trimmed in gold. They whooped louder when Long, wearing a light blue shirt and dark blue tie, pulled the shiny jersey down over his broad shoulders.
“This is a big deal and we wanted to make it as big a deal as we possibly could, so we got the whole school involved,” South head football coach Daniel Yow said. “This is a national game, the biggest high school game there is. It’s just a huge honor for Marshall and he’s a prime example of what dedication and hard work can do for you.”
The U.S. Army sends a crack jersey-presentation team to the high school of every player chosen.
There were three players picked from North Carolina this year. The U.S. Army also visited Mallard Creek High, home of linebacker and Florida State commit Josh Brown, and Wake Forest High, home of 330-pound defensive tackle Dexter Lawrence, a five-star recruit who has his pick of college programs.
U.S. Army sergeants praised Long for having the same character traits as a military man — positive things such as loyalty, courage, honor and integrity.
Long’s stature as a punter has soared like one of his kicks.
He broke every single-season record on the books this year in Rowan County by averaging 46.5 yards on 57 punts. He placed 18 punts inside the 20. His longest punt traveled 75 yards, and it wasn’t unusual to see him booming punts 55 yards in the air.
Long got a late start as a punter.
“I had knee surgery my freshman year,” Long said. “When I got back from that, I took my first real shot at punting.”
Marshall’s grandfather, Gene Long, cheerfully pointed out that the Long men have strong calves, so he never doubted Marshall would be successful. Marshall’s father, Tim Long, punted for the Raiders in the early 1980s before being injured in a car wreck.
“I remember we were just kicking the ball around in the yard one day, and I spiraled a punt, and Marshall was like, ‘Wait, how did you do that?’ I showed him, and it didn’t take long to see he was a natural at punting. He just had it. By the time, he was a sophomore, he was better than I ever was. When he got to the point where I couldn’t help him anymore, I had to find people who knew more than me.”
Long benefited from several hours of instruction from Tommy Barnhardt, a relative and a South Rowan graduate who carved out a distinguished NFL punting career from 1987-2000.
Long continued to improve under the guidance of Dan Orner, a kicking guru who enjoyed a monumental game for UNC in 2002 when he kicked field goals of 51, 52 and 55 yards in a win against Syracuse. Orner attended Thursday’s celebration.
“I wasn’t very good at first,” Long said modestly. “Sophomore year, I only averaged 37 yards. My junior year, I got up to about 40 yards. To get to the level where I was this year, it took hours of work and lots of hours and miles traveling to camps.”
The process to make the All-American Bowl roster includes competing in combines and camps.
Following an evaluation period, the Selection Committee nominates 400 seniors to be considered. There were 17 North Carolina players on that list of 400. Three made the final cut down to 90.
Long said a camp in Ohio was the key to his being chosen for the team. He out-punted several athletes there who have committed to major schools.
Long has not committed yet, although he does have three offers and is expected to receive many more.
He has great grades and would like to kick in the ACC or SEC. He’s in no rush to make a decision, so the 16th All-American Bowl could be quite a showcase for him.
Despite its relative youth, the All-American Bowl already has serious history. Players such as Andrew Luck, Adrian Peterson, Odell Beckham, Tim Tebow and Teddy Bridgewater have participated in the game.
Long had photos taken with military personnel, family and teammates. Quarterback Heath Barringer provided the best line of the day.
“I’m the guy who made it possible for Marshall to punt so much,” Barringer joked.
It was a tough season at 0-11, but the Raiders who stuck it out built some character along the way.
Some day they may tell their children they played with that guy on TV — Marshall Long.
“We’re so proud of Marshall, and this presentation was a positive way to end the season,” Yow said.
Then the band played the South fight song as the U.S. Army packed up its official van and headed for the next stop and the next All-American.