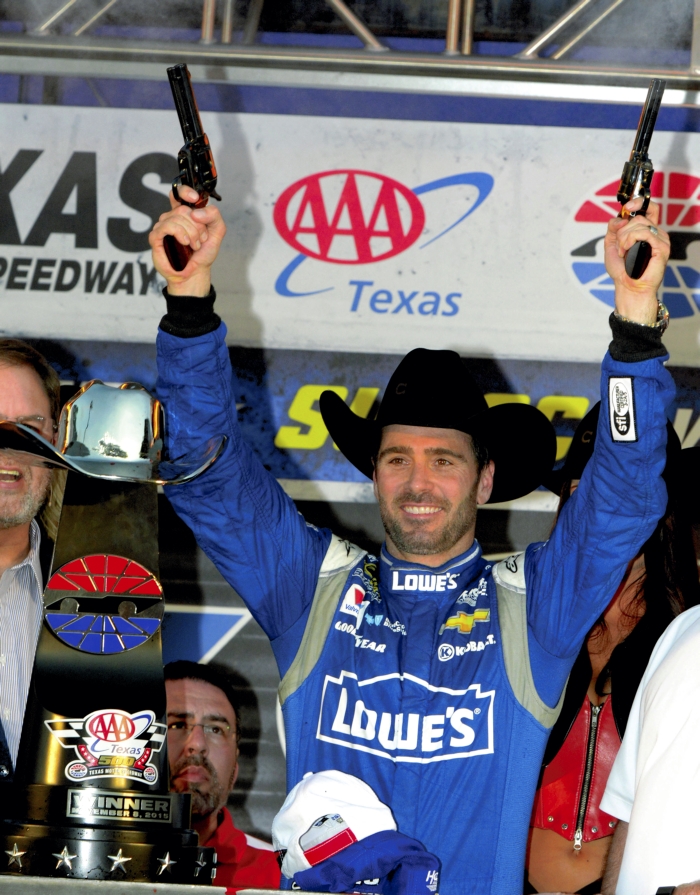 FORT WORTH, Texas (AP) — Brad Keselowski was dominating at Texas, leading lap after lap and getting oh so close to a victory that would have given him one of the four championship-contending spots in the Chase for the Sprint Cup finale.

Keselowski led a track-record 312 of 334 laps Sunday after starting from the pole, but couldn’t keep Johnson from winning the Texas fall race for the fourth straight year.

“Just one step short of having the awesome day we needed to have,” Keselowski said. “I’m not sure exactly how to feel about it at the moment. The 48 car had so much speed those last 10 laps.”

With the already-eliminated Johnson getting his 75th career victory, three spots are still up for grabs at Phoenix, the last race before the Nov. 22 finale at Homestead-Miami Speedway. The only championship contender set is retiring four-time champion Jeff Gordon, the Martinsville winner last week and Johnson’s teammate at Hendrick Motorsports.

Kyle Busch leads the points race for at least two of the spots, ahead of defending Chase champion Kevin Harvick and Martin Truex Jr. Carl Edwards is next, followed by Keselowski, Kurt Busch and Joey Logano.

“It’s not a must-win situation for us like it is for some other guys,” said Kyle Busch, who finished fourth Sunday. “Couldn’t be more pleased with the position we got right now.”

After the final restart with 18 laps left, Keselowski and Truex were side-by-side, and even made contact at one point before Truex went in front very briefly.

Keselowski almost as quickly got back in front, and Johnson also went charging past Truex into second place and right on the leader’s tail. Truex lost his power steering in those closing laps, and slipped to finish eighth.

Johnson kept pushing and on the backstretch on lap 331, he finally got past when Keselowski got really loose out of the second turn. Johnson went on to win by more than a second.

“That was the first I had seen him that vulnerable all day. I just kept the pressure on him, kept searching for line,” Johnson said.

Minutes after the race, suspended driver Matt Kenseth tweeted, “Good work @JimmieJohnson! Textbook pass for the win at the end of the race when someone is trying to take your lane. #quintessential”

After Logano chalked up contact with Kenseth at Kansas last month as aggressive racing for a win, NASCAR chairman Brian France referred to the move as “quintessential.”

Logano got knocked from first to last among the eight championship contenders after being intentionally wrecked by Kenseth at Martinsville a week ago as payback. NASCAR then suspended Kenseth for two races, and his appeals were denied.

“Clearly he was watching and bored at home,” Johnson said, when asked about Kenseth’s tweet. “That’s a nice buzz word. … Thank you, buddy. I don’t know how to even answer that.”