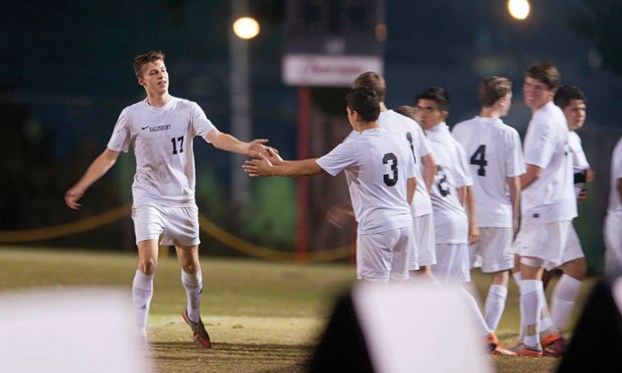 SALISBURY — Nobody’s perfect, and a chip over an aggressive keeper’s head by Salisbury striker Landon Goodman was a near-miss, glancing off the crossbar.
“I think that was the goal he really wanted the most,” Salisbury coach Matt Parrish said with a smile. “That’s a shot Landon practices a lot, and it was there for him.”
Parrish will forgive the occasional misfire by Goodman because the five goals he scored on Thursday were still quite helpful. Goodman’s offensive onslaught sparked Salisbury to a relentless 9-0 win against visiting East Lincoln in the first round of the 2A state playoffs.
Goodman headed to the sidelines at soggy Ludwig Stadium, to an ovation from fans, with 18 minutes left. He exited right after his fifth goal — an absolute rocket — made it 7-0.
Goodman tied his career high for goals. All five came in different scenarios and with different teammates presenting him with opportunities to finish.
Goodman has 107 career goals and surpassed Bobby Cardelle (105), a hero of the 2013 state champions, for third place on the Hornets’ all-time list.
“There was a little bit of luck on some of those goals tonight,” said Goodman, a tall, lean senior. “I’m just proud to be part of a program that has had so many good players. The biggest thing tonight was there was a lot of great stuff by the whole team.”
While the top-seeded Hornets (22-0-2) were taking on the No. 32 seed, Parrish was apprehensive.
He’s had numerous battles with East Lincoln coach Jason Dragoon in playoff matchups involving both genders. His biggest concern was that East Lincoln (6-14-4) was representing the Southern District 7, and the SD7’s Lincolnton, a No. 29 seed, had knocked out No. 4 seed Surry Central on Wednesday.
“Their league is a murderer’s row and they just don’t lose often to teams outside their league,” Parrish said. “Fortunately, we got off to a fast start and that levied some of my consternation. Our guys were amped up and we put two on the board in a hurry. That helped our young guys get rid of any butterflies they had.”
A creative, spinning pass by Melvin Bonilla opened up Goodman for his first scoring chance less than four minutes into the match.
“Great pass by Melvin,” Goodman said. “He just kind of turned and left the ball for me, and I struck that one pretty hard. It looked like it went off the keeper’s fingertips.”
Just 30 seconds later, Andrew Kalogeromitros was scoring unassisted, and the fiercely attacking Hornets led 2-0.
“We wanted to come out and put two or three in on them early,” Goodman said. “We were very focused.”
Goodman’s goal that made it 3-0 midway through the first half was a thing of beauty. Josh Lynch got the ball to him with one man to beat, and Goodman made a cross-over move like a basketball guard to get a clean look. Then he drilled the back of the net.
“Landon punished some balls tonight,” Parrish said.
Salisbury keeper Arturo Ramirez didn’t have to shine often, but he blunted East Lincoln’s best scoring chance when he scrambled to his right with 12:30 left in the half to preserve the 3-0 lead.
“They had a very quick player (Brett Shanklin), and most of our preparation was for him,” Ramirez explained. “We had Cristian (Uribe) and Reilly (Gokey) focusing on him all night. He really only got one good chance to score, but I was able to take that shot off my chest and recover.”
Another Goodman blast made it 4-0. This time he went airborne and used his chest to control a kick by Bryan Fragoso. After a sudden move to his right, he blasted — and scored.
The Hornets took that 4-0 lead to the locker room.
“We had a stretch in the first half where we lost focus and didn’t play as well,” Parrish said. “But then we came out and began the second half with the same sort of intensity we had to start the game.”
Lynch executed a textbook throw-in from the left side, and Ahmedin Salcinovic used his height to head the ball home for a 5-0 lead three minutes into the second half.
Two minutes later, it was Goodman again. This time he took a smart feed from Kalogeromitros and scored as he slid to the ground on the sloppier end of the field.
Salcinovic got an assist, as Goodman pounded in his fifth goal for 7-0.
Uribe converted on a penalty kick, ripping the ball to the keeper’s right with eight minutes left for an 8-0 lead.
The game ended via the mercy rule with 2:34 left on the clock when Salcinovic accepted a pass from freshman Josh Faulkner and angled a crisp, right-to-left shot to the far post.
“When we step on this field we want to dominate,” Ramirez said. “We wanted to win 9-0 because 9-0 makes the statement that you were ready to play.”
The Hornets will host No. 17 seed Ashe County (15-7) on Saturday at a time to be announced. Ashe beat Lexington 3-2 on Tuesday.
“The guys like to play in the home whites,” Parrish said. “We can wear the whites for a while if we can keep finding the back of the net.”