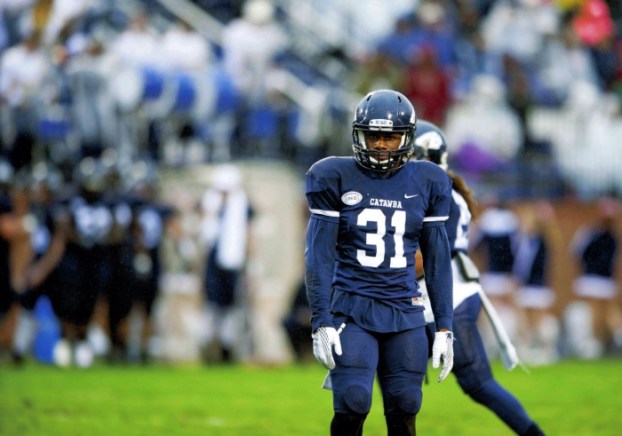 JON C. LAKEY / SALISBURY POST Catawba defensive back Jeremiah Rowland (31) looks to the sideline during a game against Wingate on Sept. 26 at Shuford Stadium. Rowland is a big part of an improved special teams unit this season for the 7-2 Indians.

SALISBURY — Winners of five straight games, the Catawba Indians have improved in obvious ways from last season — and also in subtle ways.
Covering kickoffs isn’t the first thing coaches or fans examine on a stat sheet, but Catawba has quietly made strides with that unit.
Ranked fifth in the Southeast Region, Catawba (7-2, 4-1 SAC) is allowing 21.8 yards per kickoff return this season. That’s not fantastic, but it’s down from 23.3 last year. After a slow start in the West Georgia and Davidson games, Catawba has been very solid covering kickoffs the last seven weeks.
Seven teams produced more than 100 yards in kickoff returns against Catawba last season, and North Greenville took one to the house.
This season, no one’s topped 100 yards on kickoff-return yards against the Indians since top-ranked West Georgia produced 102 on opening day.
Catawba coach Curtis Walker said the key to improvement has been identifying a number of special-teams specialists, backups who have embraced assignments on special teams with passion.
“These players are basically starters because they’re on the field so much playing on multiple special teams,” Walker said. “They understand how important they are to our success.”
Jeremiah Rowland, a 19-year-old sophomore, is a good example.
An outstanding cornerback and captain at Southeast Raleigh High, Rowland got looks from FCS schools Furman and Morgan State, but former Catawba assistant Chris Collins recruited him for the Indians.
Rowland isn’t big (5-10, 180 pounds), but he’s track-sprinter fast. He’s talented and didn’t come to Catawba with the idea of being a backup.
Catawba conducted auditions for a starting cornerback prior to the 2014 season. Rowland won a job as a true freshman. He was on the field opening night at Davidson and broke up a pass.
“His first game at Catawba, he was a starter,” Walker said. “He’s a quality player. Great work ethic. Great character. Great academics. Everything you look for when you recruit.”
Rowland played in 10 games as a freshman, although his only starting assignment was at Davidson.
Now a sophomore, Rowland is on the depth chart as a second-team cornerback behind standout senior Mark McDaniel, with talented junior Case Woodard and redshirt freshman DaiQuan Lawrence holding down the other corner. Rowland has been used as a nickel back in games against pass-heavy teams.
“Jeremiah is giving us strong depth at a place where we haven’t had much depth,” Walker said. “There’s not a drop-off when he goes in the game.”
Rowland, who has a 3.6 GPA, is a nice option to have when McDaniel needs a rest, but special teams have become his focus. He’s made nine tackles and was named Catawba’s Special Teams Player of the Week after the 29-7 victory against Brevard.
“He’s made special teams his role, and he’s become a leader within our special-teams units,” Walker said. “He’s like the quarterback on our kickoff coverage.”
When Catawba kicked off to start the second half against Brevard, Justin Peck fielded the ball at the Brevard 4 and started upfield. He collided with Rowland at the 25-yard line. Then backup linebacker Nic Richardson finished off the tackle.
“Two of my teammates broke up their wedge on that kickoff, and I was able to make a head-on tackle in the open field,” Rowland said.
Every kickoff is a small battle.
“I was able to win that one,” Rowland said with a smile.
After Catawba scored for a 20-7 lead early in the fourth quarter, Chad Hollandsworth’s kickoff sailed to the Brevard 1. Peck made it back to the Brevard 18 before he again crashed into Rowland — and then Richardson.
“That kickoff he tried to bounce outside, but I aimed my shoulder at his chest and got a pretty good hit on his upper body,” Rowland said.
Brevard’s three kickoff returns on Saturday averaged 19.0 yards. Joshua Moses, another special-teams beast, made the tackle Rowland didn’t make. That one was on the 20-yard line.
The bottom line was three returned kickoffs, with none getting past the 25 and none producing good field position.
It was another small victory for Catawba. Small victories are adding up to wins.
“Kickoff coverage is something we weren’t good at last year,” Walker said. “We’ve gotten better because guys like Rowland have accepted special teams as their role. We’ve got guys we know we can count on.”
Catawba plays Tusculum at Pioneer Field at 1:30 p.m. on Saturday.
Tusculum had kickoff returns of 80, 38 and 28 yards against Catawba last season. That will be a small battle to watch.