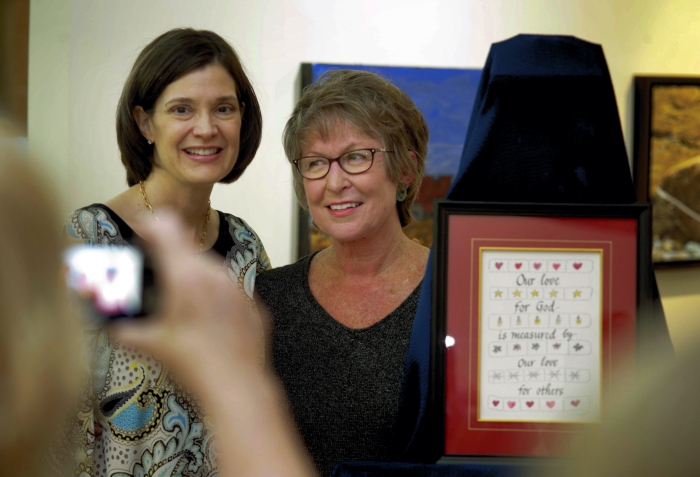 SALISBURY — Calligrapher Carole Simmons has joined an impressive roll call of people chosen over the years as artists of the Christmas Honor Card for Rowan Helping Ministries.

RHM held a reception for Simmons and an unveiling of her card Thursday at Rail Walk Studios and Gallery on North Lee Street. The annual cards, which sell for $5 apiece, represent a significant fundraiser for RHM, which feeds the homeless, pays utility bills and rent for people in need, stocks a food pantry for the poor and helps the homeless move into stable housing.

The county has a 19 percent poverty rate, “and we have a lot of need,” RHM Executive Director Kyna Grubb said.

Simmons’ card was chosen by RHM’s resource development committee from among about 15 entries. It carries the message, “Our love for God is measured by our love for others.”

Those words flow in lines among quilt-like shapes of hearts, stars, candles, holly and snowflakes.

Grubb said the card’s inscription “touches the heart of what Rowan Helping Ministries is.”

Simmons said her message is boiled down from I John 3:17, which essentially asks, if you see someone in need and you don’t do something about it, where is God’s love? Rowan Helping Ministries’s mission shows love for God through people’s support in helping others.

Simmons said she was informed in August the resource development committee had chosen her submission — one of two she was allowed to enter — as this year’s Christmas Honor Card.

“I was really surprised,” she said. “As a matter of fact, I thought it was a joke.”

Local artists have been asked to submit designs for the Christmas Honor Cards since 1993, so this is the 23rd different one.

Some artists have been selected more than once. Clyde Overcash was the winning artist in the inaugural year. Connie Loflin Peninger was chosen in 2014.

Kris Mueller, director of resource development, said the process behind the Christmas Honor Cards is “one of the most fun things we do all year.”

Owen Norvell, the outgoing chairman of the resource development committee, said choosing the winning entry is always a tough decision. Simmons’ card presents the message that is behind RHM as an organization, Norvell said.

Simmons, who is a former director of the Wee Center at First Baptist Church, said she has been the calligrapher for 67 different wedding invitations in Salisbury over the years.

Each year, many people in Rowan County send only Christmas Honor Cards and, in doing so, make donations to RHM in honor of someone.

Mueller said the cards raised about $30,000 for RHM last year.

“It means so much to me,” Simmons said of being selected.