“Proud to give back”: BlockWork volunteers hope to spur renaissance in Chestnut Hill community 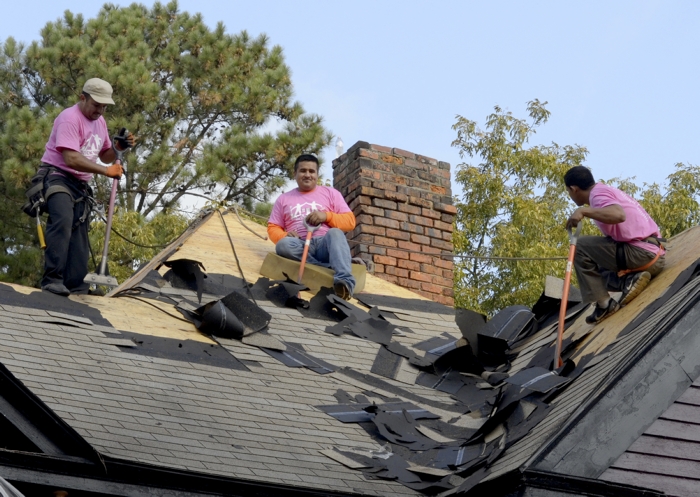 SALISBURY — They fanned out throughout the yards and streets of Chestnut Hill after 8 a.m., an army of volunteers in pink T-shirts and work gloves.

Many were young people, teenagers and twenty-somethings giving up a Saturday to give back to people they’d never met.

And that’s the most important thing to notice about BlockWork, said volunteer Janssen Keiger, senior at Rowan County Early College High School.
“I think it sets a pretty strong example,” Keiger said. “They’re seeing us coming into the community, volunteering our time ourselves. We actually want to do this, no one’s making us.”

Students from numerous schools, members of civic organizations, elected officials and residents all joined in to beautify, clean up and renovate properties in the historic Chestnut Hill community.

Pfeiffer University students worked on a signature project, a new “pocket park” on the corner of South Jackson and Harrison streets where a home was recently demolished.

“This is our annual service project,” said Ana Smith, economics professor. She worked alongside student Amanda Floberg, a sophomore studying business management, to remove overgrown grass and weeds from the sidewalk nearby.

Floberg, a native of Sweden, came to the U.S. to study at Pfeiffer last year. “It’s great,” Floberg said. “This (event) is something that’s not really common in my country, so I’m really enjoying it.”

In just over an hour, the team of Pfeiffer students had turned a row of buried posts into a white picket fence, its fresh paint drying in the morning sun.

“It’s a good feeling,” said William Kenny, of Charlotte, as he installed the wooden pickets onto the new fence. “I’m learning. I don’t normally do stuff like this.”

Elsewhere, students from Rowan County Early College painted the columns on the porches of homes.

Earlier, Peters said, “we rebuilt the granite retaining wall by hand. We’re pulling up old bushes and putting in all new landscaping.”

Peters said his business has been a part of BlockWork for five years, since the project started. “We’re very proud to give back to the community.”

For Elysia and Timothy Dembers, Saturday’s BlockWork was a chance not only to work on their historic home on South Jackson Street, but to celebrate changes in their neighborhood.
“We moved in in November of 2013,” Elysia said. “When we moved here, we saw the true potential not only of the home, but of the neighborhood.”

But absentee landlords and run-down properties have been an issue.

Crime has also been a problem. “The challenge was getting the drugs and prostitution out of the neighborhood, and getting the landlords to appreciate their properties,” said Randy Stevens, who moved into the 800 block of South Jackson Street two years ago.

Dembers said she’s gotten involved in the nonprofit Chestnut Hill Neighborhood Association, and has been a part of efforts to combat these problems.

Both Dembers and Stevens said that, slowly but surely, things have started to change.

“Now, I hear children playing in the neighborhood after school,” Stevens said. “I see families on the streets, I see joggers and walkers. People say hello, we acknowledge each other now.”

“This could once again be a really great neighborhood, ” Dembers said.
As volunteers painted, edged lawns and trimmed trees, Dembers said the city has been very supportive.

Meanwhile, there are quite a few houses that, although they need repairs, are serviceable, Dembers said. “People could be homeowners for less than what they’re paying in rent right now,” she said.

Dembers said BlockWork is an opportunity to show residents what their community is capable of becoming.

And, for the volunteers, “It’s great. It’s showing them that being a part of something is important. At the end of the day, the gratification of seeing what you’ve accomplished really means something.”

Ed Clement, founding president of the Historic Salisbury Foundation, was on the scene as volunteers transformed homes with paint and pressure-washers.
“Today’s the high water mark in the revitalization of older neighborhoods in Salisbury,” Clement said.

Revitalizing neighborhoods like Chestnut Hill is “a massive, cooperative endeavor, and the benefits will last well beyond today,” Clement said. “(Chestnut Hill) has vast potential, and it certainly deserves this attention.”

For Lee Wagoner, of the Salisbury Civitans, BlockWork was more than just a service project. It was a reminder of her childhood.

“I grew up in a really bad part of Philadelphia,” Wagoner said. “But every Saturday, all the neighbors would sweep the streets and walks. That’s what people need to do today. We all need to be responsible.”
Theresa Pierce praised the involvement of young people, including members of the Crosby Scholars program, Junior Civitans and other organizations who made Saturday’s event a group project. “They are crucial. They’re the ones who are going to take over and take it from here,” Pierce said of the youth.
Lynn Raker, senior planner with the city of Salisbury, said over 100 volunteers had registered, and more had shown up to help Saturday morning.

After five years, Raker said BlockWork has had a transforming effect on the first four neighborhoods that were selected for projects.

By the time volunteers were ready to break for lunch Saturday, the new fence was taking shape at the corner park. Fresh paint gleamed from the fronts of houses, and yards looked more open and inviting with dead limbs cleared away.