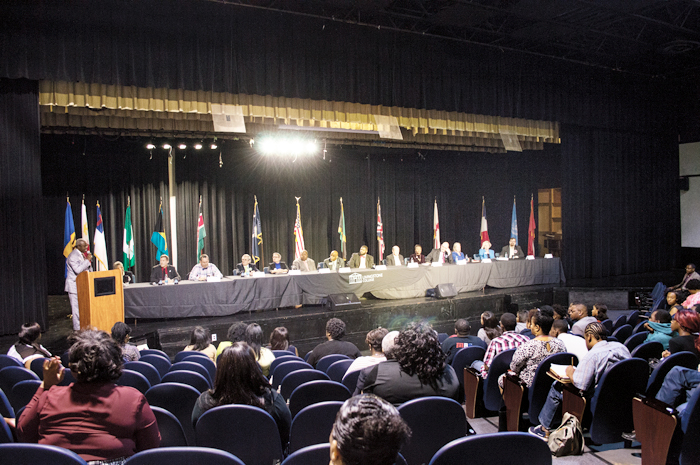 In the waning days of Salisbury’s 2015 city council campaign, candidates made an appeal to Livingstone College students during a forum at the school on Friday.

Livingstone’s forum didn’t appear to have a particular theme. Instead, moderators asked candidates to elaborate on past statements, including answers during a Catawba College forum. The usual topics — Fibrant, crime, economic development and education — were discussed. Candidates, however, didn’t receive identical questions.

Candidate William Peoples, who was unable to attend the Catawba forum because of health problems, offered Livingstone students a chance to hear his opinions on a number of topics. Witnesses not providing information to police is a more significant problem that the amount of crime occurring in Salisbury, Peoples said. He said crime has been a problem in Salisbury, especially in the city’s West End neighborhood, for a number of years. Peoples said crime has a trickle down effect and can hurt the city’s ability to draw in businesses and improve its economy, Peoples said.

Four of the 16 candidates — Stephen Arthur, Mark Lewis, Brian Miller and Jeff Watkins — didn’t attend Livingstone’s forum because of prior commitments, according to event organizers.

The last question may have been the most telling. Moderators asked each candidate to spend two minutes telling the audience why voters should choose him or her.

A summary of candidates responses is included below:

Alexander said she has been committed to the Livingstone community for a number of years.

She cited a number of board appointments and being a previous recipient of Livingstone’s President’s Award for Distinguished Service for contributions to the college. When Hood Theological Seminary was part of Livingstone, she received the second-annual Bishop’s Humanitarian Award.

She continued by listing a lengthy number of community organizations she has participated in.

“I believe you should vote for me because I’m a proven technology leader who can actually use (Fibrant) to develop our economy to develop new opportunities in industries that aren’t even thought about today,” Bentley said at the start of his answer.

Bentley is a computer engineer and focused on Fibrant for his answer.

“I know the players and I know who to talk to,” he said.

Any tax base created by additional technology businesses should be focused on education, community policing and building better relationships with communities in Salisbury, he said.

Blackwell said being on the Salisbury City Council is her only job and she works hard at it.

She also read from a prepared statement, in which she talked about responding to a citizen’s call rapidly. The instance mentioned in her prepared statement described a case where she got a Salisbury resident’s street cleaned up quickly.

Like Alexander, Blackwell also cited her past accomplishments and community organizations. Accomplishments she cited included: getting the city’s housing commission to address sub-standard housing, suggesting developing a youth council, getting crosswalks installed for Livingstone and pushing for a nearby sidewalk to be repaired and more streetlights.

Hardin spent his time telling attendees what he wasn’t going to do if elected.

“I won’t make any promises that I can’t keep,” Hardin said. “I went back and looked at some forums from the past couple of voting times and heard a lot of promises that were unkept. I’m not going to be a politician. I’m not going to sit up here and talk all this pretty flowery speech and spit in your face and convince you its raining.”

Hardin said he wouldn’t talk about creating hotspots around Rowan County when kids in the school system can’t pay the fees to use iPads and utilize Wi-Fi.

“What I’m gonna do is tell you I’m gonna be passionate; unapologetic; continue to fight for the rights of the working poor, people of color, people undervalued, under-appreciated and under-represented,” Hardin said.

“The reason why you should vote for me is because I want you to know that you are in your town,” Johnson said to start her answer. “You are a Livingstone College student … When I am running for office, I am fighting to make sure there are opportunities for you.”

If elected, Johnson said her goal was to ensure Livingstone students are serving on Salisbury’s community boards and running for office.

She said Salisbury and Rowan County’s community boards are filled with superintendents of schools and chiefs of police. Government officials need to put Livingstone students on the community boards because they have the answers, she said.

“I remember being a Livingstone College student with a million solutions and no one would listen to me in my city,” Johnson said.

“My priorities are crime,” Kersey said. “People have asked me ‘what are your top two things.’ And, I don’t have one right now after crime. Everybody up here has great ideas, but largely they won’t work if we don’t significantly reduce the crime, particularly violent crime, we have in this city.”

Kersey joked that he doesn’t want people to vote for him just because they see his name on a campaign sign. He said voters should choose him because of his stances on issues.

He then gave out his cellphone number and email address to everyone in the packed room.

“Write this down. Here is my phone number,” Kersey said.

He encouraged voters to contact him to discuss ideas.

“We need solutions to problems and I’ll tell you how that happens,” Maddox said to start his answer. “You get up in the morning, you roll your sleeves up and you get to work.”

Maddox said Salisbury City Council members have to care about Livingstone when they aren’t running for office.

“It’s got to be every day if you love this community,” he said. “I’ve been out in all the neighborhoods since I moved here in 1983.”

Maddox said he wouldn’t make any promises because it takes a team to accomplish things.

“You can have all the ideas you want, but if you can’t do it with a consensus then you can’t get anything done,” he said. “If you want somebody who is honest, who works hard and has high integrity, then I ask that you consider me.”

“I know crime,” Paris said to start off his answer. “I know all about crime and I know everybody involved.”

He said police shouldn’t stop motorists for simple traffic tickets and use the incident to search vehicles with dogs.

“We can do this without violating people’s rights,” Paris said.

He said community policing or calling in federal officials to help with crime in Salisbury were good ideas.

He said there’s problems in Salisbury neighborhoods that no one wants to address. He said Salisbury’s minority populations are under-represented in the city’s workforce.

Peoples also cited accomplishments and projects he has participated in during his life in Salisbury, including: saving Lincoln Pool, serving on the city’s housing advocacy commission, helping to build houses in the city’s West End neighborhood and getting streetlights and sidewalks on Brenner Avenue.

Post opened by saying he hasn’t yet asked a single person to vote for him and he isn’t going to.

“I’ve said from the (beginning) that Salisbury needs to change,” he said. “Pick the best five people that you see up here. If I’m one of those fine. If not, that’s OK too.”

Post talked about his experience organizing the Elizabeth Duncan Koontz Humanitarian Awards. When he was organizing the awards, his arranged speaker for the event told Post that the black communities start where paved roads end.

Post said he was living on West Liberty Street at the time, and the statement held true.

He ended the allotted two minutes by saying Salisbury has issues that need solving, and he gave out his website address, which contains a number of his ideas for the city — www.davidpost4salisbury.com

Russell said voters should choose him because he has been employed in a service capacity for his entire career. Russell said he knows how to be part of a team.

He has been a parole officer, business owner, mental health therapist and juvenile court counselor.

“Not only am I the youngest one here, but I’ve been a part of Leadership Rowan and I know how to be a team player,” Russell said. “It takes more than one person to make a decision. It takes a team.”

Russell also spent a portion of his time talking about crime. He said Salisbury’s police officers should focus their efforts on community policing.

Salisbury has a smaller police force than other, similarly sized cities, he said.

Sheffield said she understands the process and the need to represent all citizens.

“Of all the issues that come before city council, none are more important than those that impact the quality of our lives,” she said. “That includes, not just access to affordable housing, but also access to housing.”

A reduction in crime and investing in public schools were also priorities she mentioned.

Focusing on the reasons she mentioned would provide increased opportunities for all Salisbury residents, she said.