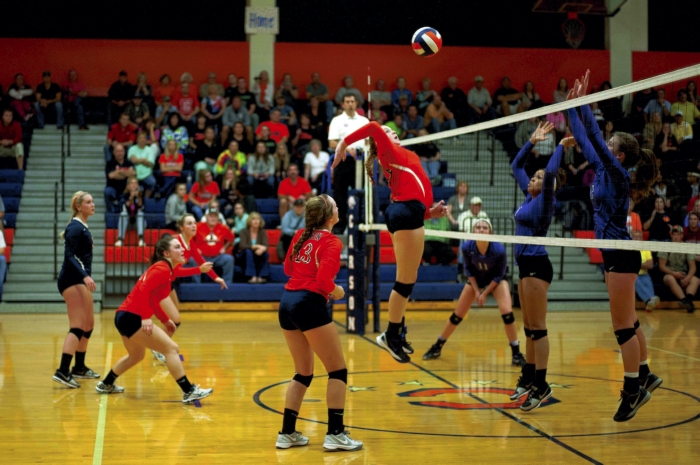 CHINA GROVE — The Carson High Cougars started their playoff run in the state 3A volleyball tournament Saturday afternoon and about the only way to describe it was “quick and efficient.”

Relying on their usual stingy defense as well as superior height and teamwork, the Cougars (26-2) made relatively quick work of first round foe Ledford in three sets, 25-9, 25-11 and 25-14.

Carson would be hard pressed to match the intensity level demonstrated in their last outing, a dramatic three-set win over Cox Mill for the South Piedmont Conference title last Wednesday. But the Cougars did handle the visiting Panthers (12-12) in a rapid 53 minutes.

“I am pleased as long as we get the victory,” said senior captain Morgan Hester, “but we definitely need to keep our focus because we lost it a little bit today. We just have to work harder toward our goal of winning the game.”

The Cougars came in as the third seed in the N.C. 3A West 32-team bracket while Ledford, out of the Mid-Piedmont Conference was the 30th seed.  The Panthers proved to be no match for Carson’s size at the net plus they were their own worst enemy at times with unforced errors.

“We struggled today in our serving and service return,” noted Ledford coach Megan Mayhew. “We just did not do a very good job of getting our offense started. But they (Carson) are a great team.”

The Panthers committed five service faults in the match, including a critical one in the midst of a five-point run in the second set. Carson was guilty of a few miscues of their own at times, but 25 kills and a half dozen blocks more than overcame the problems.

“We didn’t play with as much intensity as I would have liked”, said Carson coach Kelan Rogers, ” and we made a few errors. but it was a win and I am happy with that. It is only going to get tougher going forward.”

Carson opened the match with a 7-1 run in the first set as sophomore Lindsay Elmore dominated the net with four of her team high 10 kills. Junior Elena Turnbull then posted three kills and a block  as the team closed out the opening set with five straight points to win, 25-9.

Ledford responded by taking a quick 3-1 lead in set two behind senior hitter Gabrielle Plumez. But Carson went on a nine-point run, thanks to two kills from Elmore and a pair of service aces by freshman Mallory Weast. Turnbull then helped close out the 25-11 second set with a block, a kill and an ace.

The final set was settled early as the Cougars pulled ahead, 9-3, inspired by a long volley salvaged by Hester with a diving dig in the back corner to keep the ball in play. Ledford managed a brief run to cut the margin to 9-6, behind Danielle Searcy, but Carson put together a 9-2 run to ice the 25-14 set and the match win.

“We kind of figured this match would not be as intense as the Cox Mill game,” said senior libero Jordan Osborne, who recorded a number of point saving digs and assists while roaming the middle. “We do our best to try and keep it as focused as we should be. But now we can look forward to our next match on Tuesday.”

The Cougars will get another home match next Tuesday in round two as they face familiar SPC foe Hickory Ridge, a 3-0 winner Saturday over Western Guilford. The official start time is yet to be determined but will likely be a 5:30 or 6 p.m. start in the Carson gym.

There are four rounds of play leading to a regional final in both the West and East brackets. The two regional survivors face off Nov. 7 in Raleigh for the state 3A title.