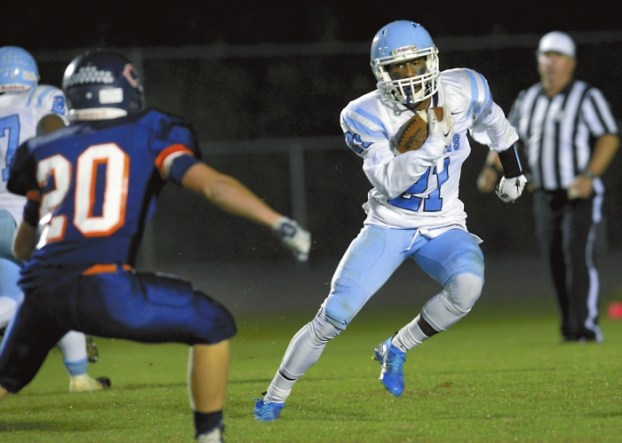 Wayne Hinshaw/for the Salisbury Post ... West Rowan’s J.T. Sanders (21) returns a kickoff earlier this season against Carson. The Cougars’ Garrett Pell (20) defends on the play. Sanders was the Friday Night Hero for his performance at cornerback in the 28-7 win over East Rowan last week.

MOUNT ULLA — At the Rowan County Track and Field Championships last spring, West Rowan’s J.T. Sanders swept the 100, 200 and 400 meter sprints.
Now Sanders, a senior cornerback, is using his blazing speed on the football field, and his goal is to help the Falcons sweep the South Piedmont Conference in football.
West (7-1) is 6-0 in the league heading into Friday’s showdown with perennial champ Concord, also 7-1 and 6-0.
“No athlete in the county is faster than J.T. and he brings a lot to us,” West coach Joe Nixon said. “He’s been very big for us. In this league you get tested on the corner every week.”
Sanders’ given name is Jaylen Tyree, but to his teammates, he’s simply “J.T.”
Sanders, who ran back a kickoff for a touchdown against Mooresville, is a big play waiting to happen and great field position waiting to happen.
Nixon tried to recall all of Sanders’ big kickoff returns this season. He remembered game-changers against Mooresville, East Rowan, South Rowan, Robinson and Central Cabarrus, but there may have been one or two more. It’s been almost a weekly thing.
In West’s most recent outing — a 28-7 win against East Rowan, Sanders nearly took another kickoff all the way. He was tackled at the East 42.
“Returns are a big part of my role on this team,” said the 5-foot-9, 160-pound Sanders, who has a high level of fearlessness that matches his wheels. “If I get the ball in my hands, I want to make a play. I usually take a kickoff return right up the middle and then I’ll try to get to the outside where I can use my speed.”
That’s exactly what he did against East. He started up the middle, suddenly veered to his left, got to the sideline, and motored.
“He was one block away from going to the house,” Nixon said.
Shutdown corners allow defenses to stop the run and pressure the passer, and the Falcons are blessed with shutdown corners in Sanders and Deyquan Byrd.
Byrd was usually matched up man-to-man against East’s talented 6-foot-2 receiver Naquis Caldwell, while Sanders usually covered Steven Hardin, a junior who had six catches for 93 yards against North Rowan and averages 11.5 yards per reception.
Caldwell was held to one catch. Hardin didn’t have any.
“I usually was able to jam him up at the line,” Sanders explained. “The quarterback looked his way a few times, but I had good coverage.”
Sanders helped the Falcons hold East’s speedy back Max Wall to 19 yards on 11 carries. Wall was coming off a game in which he ha produced 300-plus yards as a rusher and receiver.
“We worked in practice on the plays Wall would run,” Sanders said. “We did a good job of preparing.”
Sanders made interceptions against Mooresville, South Rowan and Central Cabarrus, and Nixon says he’s played at a high level since opening night. He takes his role as a senior seriously and accepts his duties as the most experienced member of the secondary.
“I’ve kind of taken the role of big brother because the younger guys look up to me,” Sanders said. “It’s important that I don’t hang my head if I make a mistake and I try to keep my teammates up if they make one. As a defensive back, you have to leave a bad play behind and move on to the next one.”
While West’s offense has been efficient, limiting turnovers and churning out 28.5 points per game, it’s the defense that’s made this team strong enough to win seven games in a row.
West’s opponents have been held to 103 points (12.9 points per game), and the Falcons haven’t allowed more than 14 in any of their last five outings.
It’s also noteworthy that West’s physical defense gets better as a game grinds on. Davie, Robinson, South Rowan and Central Cabarrus all scored first in their games with West, but the Falcons got enough stops to come back.
Sanders said there’s no secret recipe for West’s defensive success.
“Just a lot of very good players,” he said with a smile.
Nixon nodded approval at that statement.
“We’ve gotten a little better every week, and now we’re in position to play an important game Friday against a good opponent,” Nixon said.
Expect a defensive struggle, with Sanders right in the middle of it.