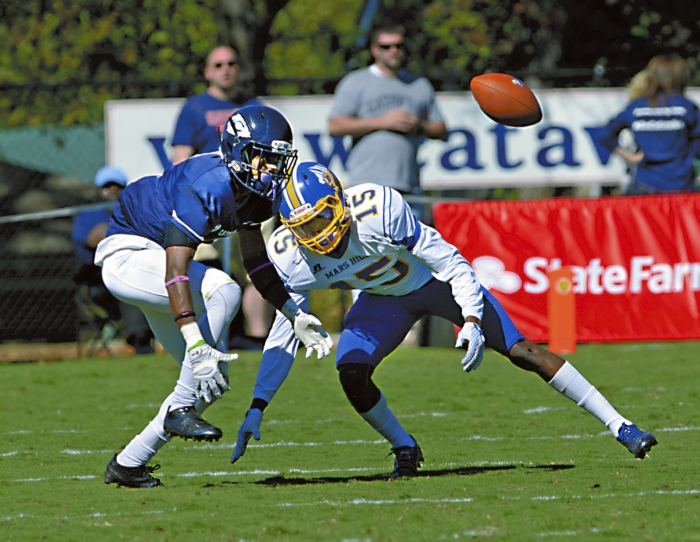 SALISBURY — When Catawba head coach Curtis Walker and his wife Sheka got married, the tune they selected for their wedding song — “Happily Ever After” — had been recorded by an R&B artist known as Case.
Case had a number of chart-climbing hits in the 1990s. He also had a son named Case Woodard II, who is now making hits of a different nature as a starting cornerback at Catawba.
“We started our matrimony with Case’s dad,” Walker said with a smile. “Now his son is helping make me a better coach and Catawba a better football program.”
Walker said he had no clue the Cases were related when the Indians began recruiting Case II.
“We were recruiting him because we thought he could be a good cornerback for us,” Walker said. “We didn’t know about any other connections.”
Not big, but a guy with 4.4 to 4.5 speed, Case II was an exceptional defensive back at Arabia Mountain High School in Lithonia, Ga. He graduated in 2013.
“I was getting a lot of Division I looks, but all those schools were scared to pull the trigger because my grades weren’t the best,” Woodard said.
Carson-Newman landed Woodard, but he didn’t last long with the Eagles. Parties and good times were a lot more appealing than schoolwork. He wasn’t the first college freshman to make bad choices, and he won’t be the last.
“I probably could’ve played a lot at Carson-Newman, but I didn’t really understand then what it took to be a student-athlete,” Woodard said. “Then I had some medical problems and I missed a lot of classes.”
After he wore out his welcome at Carson-Newman, an assistant coach told him he had the talent to excel, but he didn’t have the desire.
That scolding hasn’t been forgotten. It’s part of what drives Woodard now. He doesn’t plan to ever fall short on desire again.
“I’ve always been passionate about football,” Woodard said. “Then I didn’t have football in my life, and it was just eating me alive.”
His comeback started in a challenging environment. He spent the 2014-15 school year at Georgia Military College in Milledgeville.
Early morning flag-raising, marching and uniform inspections replaced parties.
“It was tough, the military life,” Woodard said. “We had to get up at 7 to be in formation even if you didn’t have a class until 10. But that life gives you discipline. It’s what I needed. It changed me as a person.”
Woodard played on a stout team at Georgia Military College. He would become one of 19 in his class to accept a football scholarship on National Signing Day last February.
Catawba coaches liked what they saw on film of Woodard and Walker liked him even more when he met him in person.
“It’s funny because I’m a big Pittsburgh Steelers fan, and Coach Walker walks in wearing his Steelers gear,” Woodard. “It was hard to say no to that, but I didn’t want to be hasty. It was about two weeks after that, that I committed to Catawba.”
Woodard made an immediate impression.
“The first day I saw him, I knew he’d be a starting corner for us,” Catawba quarterback Mike Sheehan said. “The guy’s got all the talent in the world.”
Woodard (5-11, 160) has been a starter since Day One. His tangible stats (two interceptions, eight pass breakups, 36 tackles) tell only part of the story of what he’s meant to a Catawba defense that has been the SAC’s second-best unit.
What’s not measurable is the amount of confidence and swagger he’s restored to Catawba’s defensive unit. Woodard has impressed opponents so much that they’re choosing to challenge Catawba’s other corner, All-SAC senior Mark McDaniel, more frequently than Woodard.
“We knew he’d be good, but he’s been better than we thought,” Walker said. “He’s that shutdown corner you look for, and when you’ve got good corners, it gives your defense a chance to do some things.”
Catawba can blitz more and take more chances with its linebackers and safeties because Woodard is secure on his island. He doesn’t need a lot of help.
“I like the chemistry of our defense and I like that we have a lot of guys out there who can make a play,” Woodard said. “Mark has a side and I have a side, and they have to pick a side. I think we’re a tough defense to pass on. We’re getting better each week at minimizing our mistakes and capitalizing on our opportunities.”
Woodard is mostly a pass-stopper, but he’ll also stick a 200-pound running back.
“I’m not big, but I’m not scared,” Woodard said. “I try to play bigger than I am.”
While Woodard’s brief stay at Carson-Newman may have raised some red flags, Catawba (5-2, 3-1 SAC) is thrilled that it recruited him.
Walker thinks back often to his meeting with Woodard’s mother during the recruiting process.
“She told me if we gave him an opportunity, we’d get everything he had, and that’s been the case,” Walker said. “He’s learned from his young mistakes, he’s grown from them, and he’s not the same person he was just two years ago. He’s appreciative of the opportunity he has here. He’s been a pleasure to coach, and he’s been outstanding on the field.”
While his story is still in the early chapters, Woodard and Catawba living happily ever might be something that was meant to be.