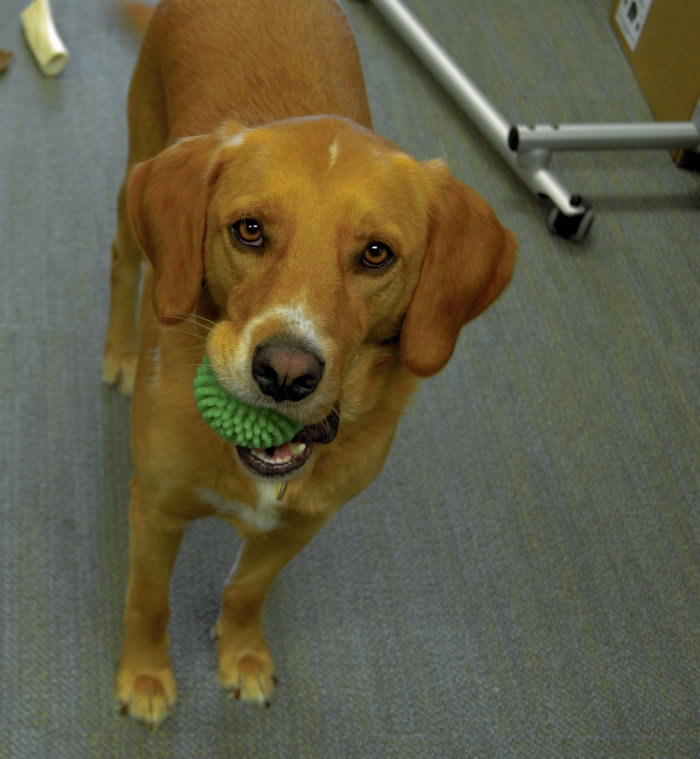 Rusty is up for anything.

“The dog is the most faithful of animals and would be much esteemed were it not so common. Our Lord God has made his greatest gifts the commonest.”    — Martin Luther

When I first heard the idea of dogs in nursing homes, I thought, ‘No way,’” says Ted Goins, who was a nursing home administrator before becoming president and CEO of Lutheran Services Carolinas 15 years ago.

But Goins changed his mind after a conversation with Dr. William Thomas. In 1996, Thomas published “Life Worth Living: How Someone You Love Can Still Enjoy Life in a Nursing Home.” The book was about the Eden Alternative, a program and philosophy that seeks to de-institutionalize nursing homes so residents may live fuller, richer lives. One of the program’s articles of faith is that dogs are good for nursing home residents.

Since embracing the idea of culture change, LSC homes have opened their doors to furry – and sometimes feathered and finned – friends.

Rusty came to Trinity Place, which offers skilled nursing, rehabilitation, and assisted living services, after the home’s previous dog, Heidi, “left to pursue other interests,” says Administrator Courtney Adams. Social worker Lisa Clayton knew of some available dogs at the local Humane Society and arranged for Rusty to come for a trial visit.

It didn’t take long for everyone to realize that Rusty, who was about a year old, would be an excellent fit. Calm and wise beyond his years, Rusty slipped seamlessly into the world of Trinity Place and into the hearts of its staff and residents.

LSC’s mission statement speaks of “walking together with all we serve.” Undoubtedly Rusty is a servant as well – one who walks with four feet instead of two. With a gentle nuzzle and the wag of a tail, Rusty creates a sense of normalcy and makes Trinity Place feel like a home and not an institution.

Indoors most of the time, Rusty also has the run of Trinity Place’s enclosed courtyard, where he likes to retrieve tennis balls and roll around in the monkey grass.

Rusty retires to his crate around 11 p.m. but is back on his rounds at 7 or 8 a.m. When he’s not padding around the building being a goodwill ambassador, he keeps Adams company in her office. A few times a week Adams takes Rusty home with her to get some vigorous exercise.

But Trinity Place is Rusty’s real home. He loves to greet people with his paws on the counter of the front desk, occasionally displacing Jena Miller, Trinity Place’s two-legged receptionist.

“He’s an icebreaker,” Miller says. “When people come in, he makes them feel comfortable. He connects people to us right away. Everybody loves Rusty.”

Many residents keep a stash of treats to offer to Rusty when he slips into their rooms. In fact, Rusty’s dog food bowl goes untouched for long stretches because he grazes so much while he circulates around the building.

Resident Sarah Blalock looks forward to her daily dose of Rusty. “He’s a sweetheart. He helps us. He makes me laugh.”

“He’s a good puppy dog,” says resident Martha Bowers. “I love him all over.”

Alease Barbee coos over Rusty as though he were a favored child: “You’re a pumpkin!” she says. “Yes you are!”

“He comes to see me every day,” says resident Margaret Tyson. “He makes me feel better.”

Increasingly, science backs up the idea that dogs do, literally, make us feel better. Petting a dog can decrease levels of stress hormones, help lower blood pressure, and even release a hormone called oxytocin that is associated with bonding and affection.

Holly Smith, a ward clerk at Trinity Place, believes Rusty has a sense that draws him to comfort those who are suffering or nearing the end of life.

When Smith’s grandfather was dying of cancer, Rusty would come in every afternoon while the family gathered around and lie on the floor at the foot of his bed.

Adams has been gratified by how Rusty lifts everyone’s spirits. “It really is amazing how much happiness he brings and what a difference he can make in residents’ lives,” she says.

Reprinted from The Lutheran Magazine. Katie Scarvey is a communications specialist with Lutheran Services Carolinas. Photos by Katie Scarvey.

Rev. John Elam: A legacy of heroes and characters