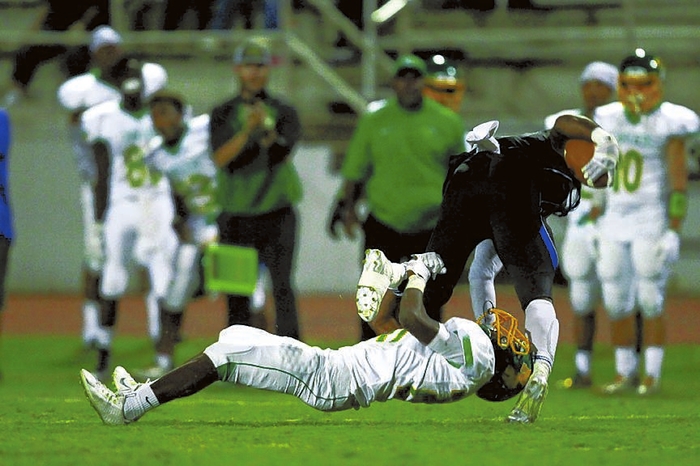 James Sipes/For the Salisbury Post ... North Rowan defensive back Chris Clodfelter hangs on and trips up a Statesville ball carrier, preventing a touchdown, during a game on Sept. 4. Clodfelter had two interceptions last week against Lexington to earn Friday Night Hero honors.

SPENCER — North Rowan went five games without making an interception.
It’s no coincidence that the Cavaliers went 0-5 in those games.
Three picks were essential to North’s 24-20 win at East Rowan on opening night, but the Cavaliers were pick-less in consecutive losses to Carson, Statesville, Davie, South Iredell and West Stokes.
“Oh, we had our chances to get quite a few picks that might have changed games,” said former Catawba star Rodney Goodine, who coaches North’s defensive backs. “But we had butterfingers. We needed some stickum.”
The days when DBs were allowed to coat their hands (and bodies) with stickum and other gooey adhesives are long gone, but North free safety Chris Clodfelter’s good hands produced two picks in Thursday’s 18-13 win against Lexington.
Clodfelter’s second interception — leaping in traffic — sealed the victory that enabled the Cavaliers to start 1-0 in a wide-open 2A Central Carolina Conference race.
At 160 pounds, Clodfelter, a junior in his first season of varsity competition, is far from the most imposing looking guy in the North locker room. On a practice day, wearing glasses and braces, he looks even less scary, but he’s a player who understands his limitations and his strengths.
“I’m undersized, but I knew that going into the season,” Clodfelter said. “My goal is to play with heart and with passion. If you have enough heart and passion, you can be the most dominant person on the field, no matter how big you are.”
Clodfelter was a starting cornerback on North’s jayvees last season and put in many offseason hours trying to getting stronger and faster to deal with the rigors of varsity play.
“Chris put in his time on the jayvees, and all spring and all summer we were thinking he’d be a starting corner for us this season,” North head coach Ben Hampton said.
But injuries happen in a violent sport. When a safety went down, the decision was made to switch Clodfelter to free safety.
“It’s a little different,” Clodfelter, who grew up with notable North athletes Javon Hargrave and T.J. Bates as neighbors. “I hadn’t played the free safety position before, but you play where the team needs help the most. I’m feeling more comfortable with every game. It’s still just playing the game of football.”
That’s true, but Clodfelter’s responsibilities have increased in the Cavaliers’ 4-2-5 defense.
“Free safety is the quarterback of the secondary and he’s got to make a lot of adjustments,” Goodine said. “Chris is learning to make those adjustments. He’s gotten a lot better.”
Clodfelter doesn’t mind sticking his nose in against bigger players when it comes to stopping the run. North credits him with 38 tackles this season.
Lexington has fast skill people and North’s defense faced serious challenges in containing slot back Jerarmony Charles, running back Sakeem McIntosh and quarterback Daniel Reid-Bennett.
Especially Reid-Bennett. He’s 6-foot-2, 195 pounds, runs a 4.5 40, and is such a good athlete he’s Lexington’s free safety as well as quarterback.
“We’d faced Statesville’s outstanding quarterback (Travis Ramseur), but Lexington’s quarterback was one of the most athletic guys we’ve been up against this season,” Hampton said. “I thought our defense did a great job. Our front four contained him and let our linebackers make a lot of tackles.”
Clodfelter intercepted a pass in the second quarter that gave North’s offense the ball at the Lexington 28, but North lost a fumble three plays later.
Clodfelter’s second interception came with 1:11 left on the clock. Reid-Bennett had to try to make something happen on third-and-15 from the Lexington 25 and threw into a crowd. Clodfelter came down with the ball, and it was time to celebrate.
“The free safety has to think as well as react,” Hampton said. “Chris sees the field and he reacts to the ball well when it’s in the air. He stopped their last-ditch effort.”
Despite five offensive turnovers, North managed to win the game. That was the bottom line.
Give a lot of the credit to the free safety.
“Chris made two great reads and came up with two very crucial turnovers,” Hampton said.