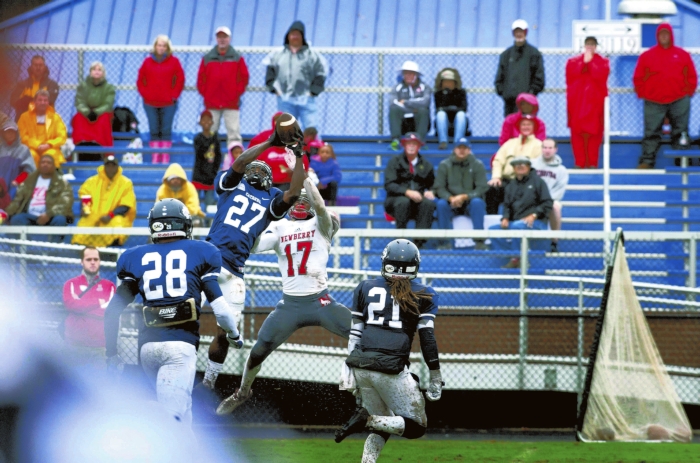 JON C. LAKEY / SALISBURY POST ... Catawba’s Mark McDaniel (27) denies Newberry’s Jalen Cook (17) the pass but Cook denied McDaniel the interception by knocking the ball out of his hands during action from a game on Oct. 3, won by Catawba, 17-13. The Indians defeated Limestone last Saturday, 10-3, behind three interceptions from McDaniel, a South Rowan graduate.

SALISBURY — Mark Jerome McDaniel Jr. will celebrate his 23rd birthday on Saturday when Catawba hosts Mars Hill at 1:30 p.m. at Shuford Stadium.
Along with 24-year-old guard Tim Pangburn, McDaniel has seniority on the Catawba roster, although there’s no chance McDaniel is going to give a rah-rah pep talk prior to Saturday’s game.
“No speeches,” the senior said. “No yelling and screaming — that’s just not me. I’ve always spoken with the pads between the lines.”
McDaniel spoke loudly between the lines on Saturday. He produced history at Limestone in a defensive struggle on a bad-weather day.
“Horrible, horrible weather,” McDaniel said. “It was one of those days where you knew one slip could mean a touchdown that would lose the game. Fortunately, we didn’t make that slip.”
In high school at South Rowan, McDaniel picked off three passes in four varsity seasons.
He matched that total Saturday night, which made him an easy choice as Catawba’s first South Atlantic Conference Defensive Player of the Week of 2015.
“What can you say — three picks and 143 yards in returns,” Catawba defensive C.J. Barksdale said, shaking his head. “That’s a great game for anyone.”
McDaniel’s first two picks came by grabbing tips after linebacker Michael Peppers and DB DaiQuan Lawrence made deflections.
“We had good defensive calls and guys were in the right position,” McDaniel said. “It could’ve been one those guys intercepting the ball instead of me, but I was just there at the right time. The other thing was Barksdale and the guys getting pressure on their quarterbacks. We made them throw before they wanted to.”
McDaniel’s first interception set up Catawba’s only touchdown in a 10-3 victory. His second interception led to a field goal. His third interception tied the school record, and the 84-yard return that followed it sealed victory. Catawba (4-2, 2-1 SAC) has won three of its last four games despite failing to score 20 points in any of them.
Catawba coach Curtis Walker handed out the first game ball he’s presented in his three years at Catawba to McDaniel after Saturday’s victory. That’s something that will stay with the 5-foot-11, 185-pound cornerback the rest of his life.
“That ball is in my room now and I’m going to put it in glass with the date on it,” McDaniel said. “I had no idea three interceptions was the school record until I started looking at the stats on the way back. You think about having your name in the Catawba record book, and that’s a great honor.”
McDaniel had five interceptions in 2014, tying for second place in the South Atlantic Conference.
Saturday’s interceptions were the seventh, eighth and ninth of the three-year starter’s career, but he joined the Catawba program back in 2011 without fanfare or hype.
He was an intriguing player in high school and was a versatile four-year varsity player. He scored touchdowns for South Rowan in six different ways — punt return, kickoff return, interception return, fumble return, rush and reception — and he even threw a touchdown pass.
In his first game as a freshman at South, he returned a fumble for a touchdown. As a sophomore, he had a 94-yard pick-six. He accounted for four special-teams TDs as a junior and returned two kickoffs for touchdowns in a blowout of Statesville.
McDaniel’s first extensive use on offense as a prep player came as a senior in 2010. He scored 17 touchdowns that year, including four in one game against North Iredell.
McDaniel played in six games as a true freshman at Catawba in 2011, mostly special teams, as the Indians tried to figure out if he was best at receiver or defensive back.
In the fall of 2012, he was ineligible academically, and that was the low point during his time at Catawba. But he came back strong in the classroom, regained good academic standing, and shined in the 2013 Spring Game.
The last three seasons, he’s been a fixture in the secondary. He has 97 career tackles.
“Mark had an amazing game Saturday, and what a great player he’s been the last three years,” Walker said. “He’s a local guy who’s well-liked in this community and he’s earned the role of team leader by his actions. He’s not a guy who’s going to chew out his teammates, but everyone on this team knows he brings it all and brings it every day.”
The best part of McDaniel’s story is he’s on track to graduate in May with a business degree.
“It’s been a long road,” McDaniel said. “I’ve just tried to always push forward.”
When Catawba takes the field Saturday the Indians will be seeking the 500th victory in program history. It’s fitting they’ll be going for it on McDaniel’s birthday.
“Mark is a great guy off the field as well as a great guy on it,” redshirt freshman offensive tackle Quinzavious Sands said. “He’s a role model for all of us.”