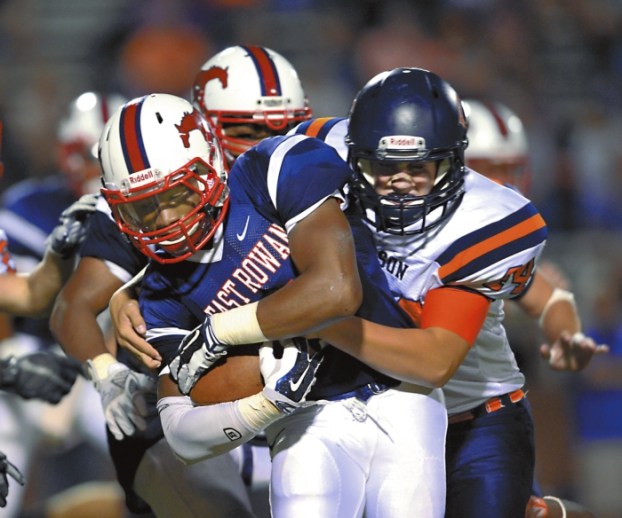 East Rowan notebook …
GRANITE QUARRY — Junior Max Wall’s effort in Friday’s 36-13 win at Northwest Cabarrus was exceptional by any measuring stick, but for East Rowan coach Kenneth McClamrock it was only what he expected.
“Max had a great game, but it was the kind of game we’ve been waiting on him to have and it was the kind of game he’s capable of having every week,” McClamrock said. “What was really good about Friday was that he blocked as well as ran the ball.”
•••
Wall scored four touchdowns to tie the school single-game record.
He rushed for 241 yards on only 11 carries and had 100 receiving yards on six catches. His night included breakaways of 89 and 95 yards.
“When you get long runs like that, wide receivers are blocking downfield,” McClamrock said. “Our receivers haven’t gotten as many catches as we’d like in recent weeks, but they’re still doing an incredible job of blocking.”
East’s receiving corps is led by Naquise Caldwell, Steven Hardin and Sam Wall, a freshman who is Max’s younger brother.
•••
Max Wall has accumulated 830 rushing yards, 366 passing yards (he was the QB when Tate Houpe missed two games with injury) and 264 receiving yards.
Wall has 2,377 career rushing yards and is closing in quickly on the school record of 2,698 yards set by Cal Hayes Jr. from 1998-2001.
Wall had a head start on Hayes. Hayes played varsity football as a freshman, but he was still small at that point and was used almost exclusively as a receiver. Wall piled up 619 rushing yards as a varsity freshman.
Hayes, a third-round draft pick by the St. Louis Cardinals in 2002, is remembered mostly for what he did on the baseball diamond for East and Rowan County American Legion, but he also was an electrifying football player as a running back/quarterback/kick returner. Hayes had a 344-yard rushing night at Robinson in 2001 that was the biggest rushing game ever by a Rowan County player until West’s K.P. Parks had a 356-yard night against Carson in 2009.
Hayes scored four TDs in a game three times, including an amazing performance against A.L. Brown his senior year.
•••
East (2-5, 1-4 SPC) desperately needed the win at Northwest. The Mustangs had not tasted victory since they pounded Salisbury 33-0 on Aug. 28.
“Any win is a good one, but especially when you get one inside the conference,” McClamrock said.
•••
Defensively, the Mustangs have been stout for a solid month, especially in a 14-6 loss to Carson.
Northwest Cabarrus got its first TD on Friday when the Mustangs had an accident on a punting attempt and handed the ball over to the Trojans at the East 4, but the Trojans didn’t have any scoring drives when the game was still in doubt.
“We executed the defensive gameplan well,” McClamrock said. “Northwest is an option team. We shut down their running game and made them throw it. Then we defended the pass well.”
McClamrock praised the games turned in by defenders Hunter L’Hommedieu, Hunter Collins, Jake Gregory and Wesley Porter.
•••
East has started two freshmen on defense the last two weeks — linebacker Christian Bennett and DB Deiontae Gallman.
“For young kids, they’re doing a super job,” McClamrock said. “They were a step away from making big plays Friday, and, in time, they’re going to make those plays.”
•••
Tate Houpe had his best game in a while on Friday, throwing for 187 yards and two touchdowns. The punter and kicker as well as East’s quarterback, Houpe nailed a 21-yard field goal attempt.
“Tate made a couple of good reads and he made a couple of good play-changes at the line when he saw things,” McClamrock said. “He played well and the offensive line protected him.”
Houpe threw a TD pass to Wall. The other went to Hardin, who made his first TD grab of the season.
•••
East has a short week.
The Mustangs host West Rowan Thursday in a Time Warner Cable televised game on Channel 323. The pregame show starts at 7 p.m.
It will be the first televised regular-season game involving Rowan County teams.
“None of have experienced this and there are going to be some distractions this week with cameras at practice and TV guys doing stories,” McClamrock said. “But I know our kids are excited and I believe our fans will be excited. We can still do some good things. There’s a lot of season left.”