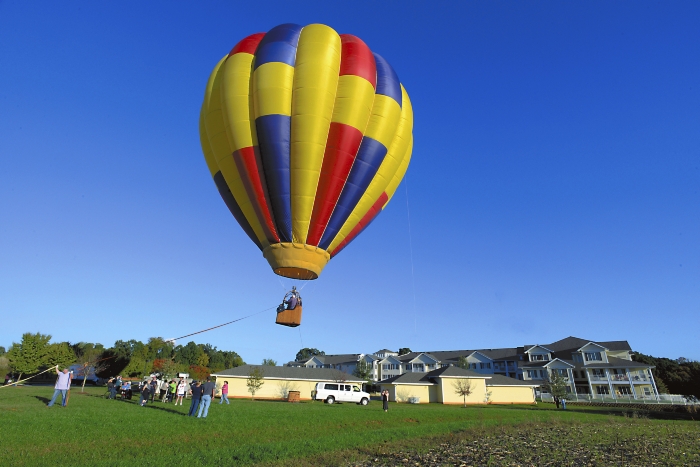 The primary colors of the hot air balloon hang bright in the westering sky. Two residents from Oak Park Retirement lean over the edge of the basket and wave at the crowd on the ground.

“Say hi to Dorothy,” someone yells up at them.

While they didn’t quite make it to Oz, residents at the Oak Park Retirement Facility did get a bird’s eye view of the area Sunday afternoon.

Activity Coordinator Karen Leonard says the balloon flights are part of Oak Park, and its parent company, the Hawthorne Retirement Group’s, commitment to its residents. The residents at Oak Park have lived full lives, but the staff likes to add new memories and experiences, as well. That’s why they make a habit of asking their residents if there’s something they’ve always wanted to do.

The requests vary. They can be as simple as learning to play the piano or as adventurous as skydiving.

For Dottie Kobe, 87, it was flying in a hot air balloon.

“They just plain fascinated me,” she said.

Kobe used to live in Florida, and every Saturday she’d watch a flight of balloons lift off from a nearby golf course “en masse.” She says sometimes when she drove to work in the mornings she’d see them floating out over the lake nearby, hanging in the sky. She’s always wondered what the world would look like from the basket, and wanted to see the way the neighborhoods and cities spread out below her feet.

But she never got the chance to go. Until she got to Oak Park.

And she wasn’t the only one who was interested. Irene Moeller’s daughter says her mother is a daredevil. But Moeller, 83,  has another word for it.

“I’m an adventurer,” she said.

In her three years at Oak Park, Moeller has jumped at every opportunity from horseback riding to whitewater rafting. She even made the Salisbury Post in 2014 for a skydiving trip.

Moeller says she’s worked hard all her life. She used to own a poultry farm and had six kids. She never stopped working, and never had many opportunities for adventure. But it’s left her with a determination to experience as much as she can.

“If the opportunity’s coming, I’m taking it,” she said.

In all, Leonard said that 35 residents were interested in a jaunt in a hot air balloon. So she came up with a two-fold plan. A longer flight would take Moeller and Kobe around the neighborhood and the other residents could take short hops in tethered balloon.

The balloons were provided by Charles Page of Big Oh! Balloons and Marsha Treacy of AeroSports, Inc. Both companies are based in Cool Springs.

A sign on the back of Page’s vehicle reads “Caution: Frequent Indecision.” And that proved true at the start of the event when the pilots sent up helium balloons to determine weather conditions higher up. The verdict came back: not enough wind.

But it’s not unusual to cancel flights due to lack of wind, either, she said. After all, you have to be able to go somewhere. And yesterday, Treacy and Page determined that there wasn’t enough wind to clear the bank of trees to the West.

This is the third time the full flight has been cancelled, but Leonard says they’ll try again, and keep trying until it happens. In the meantime, residents were able to take turns riding in the tethered balloon to get a feel for flight. At the end of the day, Kobe and Moeller decided to take the tethered flight, for the time being.

Kobe was disappointed by the previous two cancellations, and says her enthusiasm is going down. But as long as the offer for a full flight stands, she’ll go. She shields her eyes and looks up at the sky.