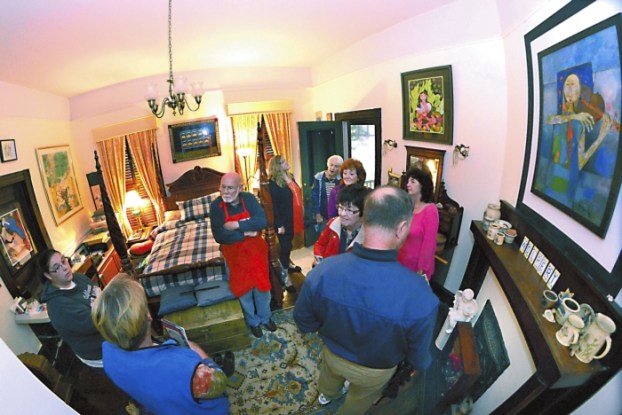 Owner of the the T.J. Anderson House at 500 West Council Street, Tom Wolpert, standing in the center with the red apron, gave a tour of his bedroom and his collection of art.. The home was constructed in 1911. Photo by Wayne Hinshaw, for the Salisbury Post

The line in front of the T.J. Anderson house is long. People huddle into raincoats and squeeze under umbrellas to escape the drizzle and persistent cold as they shuffle forward. But it’s worth it. The inside of the 1911 house is warm and cozy and welcoming. The lights are bright, and the walls pop with color from cheerful paint and art gathered from all over the world.

Nancy Shirley stands outside on the sidewalk with her son and daughter. She says she’s gone to OctoberTour five or six times, but she never gets tired of it. If asked, she’ll say she’s a bit nosy.

It’s a rare thing to be invited to tour a stranger’s home, and the 13 houses featured on this year’s OctoberTour are worth poking your nose into. This year, the tour features all shapes and sizes, from the new apartments above the old Bernhardt Hardware store to the simple and elegant Anderson house to the near mansion of the Fulton-Mock-Blackmer house. No two houses are the same age or style and they’re scattered throughout the varied and colorful neighborhoods of Salisbury.

At 11 a.m., an hour after the tour started, Anderson house Docent Tracy Ratliff said she’d logged 120 visitors, despite the drizzle.

While Davis said he didn’t have the exact ticket numbers, he knew that presale numbers were running high, and looked like they might challenge the 2012 tour’s sales — which had been their biggest year. And few people have seemed deterred by the gloom.

“We actually had a really steady crowd,” he said.

Cheryl Gunter came from North Myrtle Beach to see some of the houses. She’s originally from Salisbury, and OctoberTour with her sister has become something of a family tradition.

“I come home every year,” she says, waiting to enter the Price Rental House.

Her sister, Robin Safrit, lives in an older home, and says she takes mental notes as she walks through the old buildings for ways she can improve her own house.

Across the street, Cathy Matthews paints in the rain, her canvas shielded by an umbrella. On the canvas a miniature of the Price Rental House takes shape. She’s with Plein Air Carolina, and the painting will be sold in their wet paint sale at the Hall House Saturday evening.

“Every year I try to do one on the Tour,” she said.

But finding a house on the Tour with good parking and a good place to set up an easel doesn’t always work out. Last year, she said traffic was so bad she used the steeple of First Presbyterian Church as her subject, instead of one of the houses.

At the Bernhardt Apartments, Docent Gary Thornburg gives the tours. Thornburg worked in the Bernhardt Hardware store off and on until 1998. Walking through the newly constructed apartments, he can still remember where things were—from sled storage to Paul Bernhardt’s old office. Thornburg says he loves the new life the apartments have brought to the old building. And some things aren’t so different. The walls and the counters may be new, but the original heart-of-pine floors still shine in some of the apartments, and the exposed brick walls in the corner apartments are the same that have supported the building since 1896.

One of the biggest draws for the Tour this year is the Fulton-Mock-Blackmer house. People waiting for other houses buzzed with excitement, trying to pick the best time to go and beat the lines.

“This is the first time it’s ever been open to the public, ever,” Davis said.

The house was locked up for thirty years, suffered a fire, and was condemned by the city until Al Wilson stepped in and fixed it up just enough to spare its demolition. The Blackmer house was featured on the Tour a few years ago after being purchased by the Salisbury Historical Society, Davis said. At the time, it was undergoing basic renovations to get it ready for sale — a process that paid off. The Dixon family bought the house in February of 2014 and began renovations which finished early this year.

Wilson stands at the door of the Blackmer house to give visitors a little bit of the house’s history and to give credit and thanks to all of the people and families who helped preserve and restore the house during its long lifespan.

“What you see here is the work of a lot of people,” he said.

Inside is a perfect blend of modern and historic. Interior Designer Chad Morgan says they tried to reuse as much of the original house as possible. The double doors at the back of the hall are the same ones that graced the house when it was built in 1820. The fireplace in the living room is off center, just as it was built. Above it is a mirror from the Blackmer age that was restored after the fire. A piece of one of the original columns crowns a china cabinet as an art piece. The ceiling is new, but the chandeliers are antiques, and were purchased from another historic house in Salisbury.

The house itself seems to be a work of art with its old wood, delicate stencil work, and wide windows. But it is only one of the masterpieces featured on 2015’s OctoberTour.