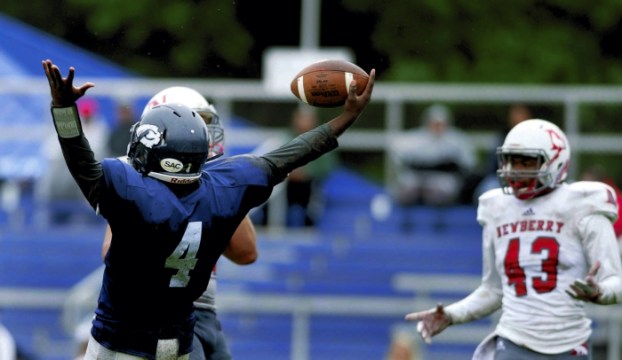 SALISBURY — At slick, muddy Shuford Stadium, Catawba quarterback Mike Sheehan felt like he was running on a treadmill when he took off up the middle late in the third quarter.
The desperation of a 10-point deficit was staring Sheehan in the face, but he wasn’t running in place. Instead he was going places. He raced 60 yards, from the Catawba 23 to the Newberry 17, before he was dragged down by Newberry’s Devine Kelly.
That play transformed Saturday’s SAC game. Catawba rallied to beat Newberry 17-13.
“We were hoping Sheehan’s play would get us back in the game,” Catawba coach Curtis Walker said. “But it did more than that. After that play, we took control of the game.”
Sheehan made a sweet fake to David Burgess, sticking the ball into his belly, and then extracting it. He fooled almost everyone in the stadium.
“I heard the crowd oohing when they tackled David, but I still had the ball, and then I got out the back gate,” Sheehan said. “We even faked out the officials. I startled the back judge when I ran up on him.”
Catawba (3-2, 2-1 SAC) began the day with a steady, grinding drive that included a Sheehan completion to Gary Williams for 12 yards on a third-and-9. Burgess, returning from ankle and knee injuries that cost him three games, got the call on fourth-and-1 and kept the drive moving. Chad Hollandsworth’s 19-yard field goal gave Catawba a 3-0 lead.
Catawba’s offense was quiet after that for a long time.
That meant Catawba’s defense had to dig in against a powerful Newberry ground game, featuring punishing 205-pounder Romelo Doctor. Newberry’s Ryan Janssen booted a tying field goal before halftime and kicked another one with 8:20 left in the third quarter for a 6-3 Newberry advantage.
After Catawba’s offense went three-and-out following Janssen’s field goal, Doctor spearheaded a bruising, 60-yard drive for the game’s first touchdown. The Wolves (3-2, 1-1 SAC) led 13-3 with 2:31 left in the third quarter, and it appeared the game was headed down the same dark tunnel as Catawba’s 17-0 loss to Wingate the previous week.
“The defense was bending but not breaking, but we can’t rotate a lot and we were all getting tired,” Catawba nose guard Jonathan Jean said. “They got a field goal, then we go right back on the field, and that’s when they got their touchdown.”
With Catawba down two scores, the offense silent, the game sliding away, and fans edging toward the exits, Walker thanked the defense for keeping the Indians in the game and asked the offense to provide a lift. This time the offense did.
“It was pretty much now or never,” Sheehan said.
Suddenly Sheehan was charging down the field, with only muddy grass in front of him, and with Newberry defenders in hot pursuit. Kelly caught him, but Sheehan held on to the ball. Moments later, he was tossing a 16-yard touchdown pass to wide-open Keyon West. Catawba’s deficit had been trimmed to 13-10.
“That run by Sheehan, that was the juice we needed,” Jean said. “The offense had our back today and defense was determined to finish.”
Young DB DaiQuan Lawrence stopped elusive Newberry QB Braxton Ivery a yard short of a first down on a third-and-6 scramble, and Newberry punted. Carlos Tarrats returned that punt 21 yards to the Catawba 44.
“They double-teamed me, made it tough for me to catch passes,” Tarrats said. “I had to find other ways to help out.”
Tarrats provided field position. Then the Indians produced another big play. Sheehan threaded a needle to a tightly covered Williams on third-and-11.
“I made eye contact with Mike and I knew he was looking for me,” Williams said. “A hand went right by my face and swiped at that ball but he didn’t get it. After I made the catch, I had the first down. Then I turned around and I was shocked not to see anyone. So I took off.”
The gain was 44 yards to the Newberry 13, and Cary Littlejohn and the offensive line needed only two plays to punch the ball into the end zone from there. Catawba led 17-13, with 11:15 remaining.
Catawba was able to exhaust chunks of the clock with good blocking and tough runs by Eamon Smart, Littlejohn and Burgess.
Newberry had three empty offensive possessions down the stretch.
Cornerback Case Woodard stopped Newberry with tight pass coverage on a third-and-6 and forced a punt.
Linebacker Kyle Kitchens stuffed Doctor on a third-down run to force a punt.
Cornerback Mark McDaniel and inside linebacker Michael Peppers halted Newberry’s final possession with a fourth-down stop at the Newberry 32, two yards shy of the first-down marker.
“We played with our backs to the wall a lot, but it was the first time this year that all four linebackers were on the same page and had a good game at the same time,” Peppers said.
Safety Chris Carpenter and inside linebackers Peppers and Trey Evans made eight tackles each for the Indians. Kitchens and Woodard registered sacks.
Newberry had more exciting stats with Doctor hammering for 143 yards and Ivery, a receiver-turned-QB, zig-zagging for 108.
Sheehan had 88 rushing yards and a modest 95 passing yards, while Littlejohn rushed for 70 yards.
But Catawba made the key plays and turned in a turnover-less effort in difficult conditions. It’s rained for 10 straight days so the field was a muddy mess.
“We showed we can win in bad conditions,” Walker said. “We practiced in rain and mud all week, so we knew what the footing would be like.”
A second SAC loss and a third overall loss would’ve ended numerous dreams, but the win keeps Catawba’s long-term goals alive — at least for another week.
“All the phases clicked today,” Peppers said. “That’s exciting moving forward.”
Catawba travels to Gaffney, S.C., next Saturday for a night non-conference game with Limestone.