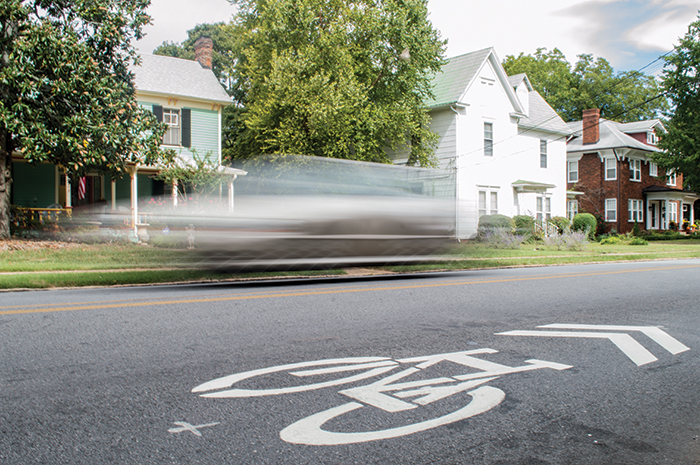 Josh Bergeron / Salisbury Post - A car zips by a "sharrow" on Fulton Street. Sharrows are intended to tell drivers to share space on the road for cyclists.

The Salisbury Bicycle Coalition is jumping into the 2015 Salisbury City Council race.

After sending out a questionnaire in early August, the group gathered responses from 11 of the 16 city council candidates. Skinny Wheels Bike Shop owner and coalition member Eric Phillips said it was important to learn where candidates stand on cycling in Salisbury. City council members usually make a final decision on where bike lanes are planned in Salisbury, Phillips said.

Recreational bike use, Phillips said, helps with health and fitness. When bikes are used as a primary form of transportation, Phillips said pollution, available parking and road congestion begin to improve.

In the questionnaire sent to candidates by the Salisbury Bicycle Coalition, most rated existing bicycle facilities as inadequate. Five of the 16 candidates — Roy Bentley, Kenny Hardin, Scott Maddox, William Peoples and Troy Russell — were unable to be reached or did not respond as a part of the bicycle coalition’s questionnaire.

Of those who did respond, six said current bicycle facilities were inadequate.

In the questionnaire and answers, Salisbury’s 2009 Comprehensive Bicycle Plan was repeatedly mentioned. Among other things, the bicycle plan proposes a number of different bike paths throughout Salisbury. The Complete Streets plan for East Innes and Long streets is also mentioned in the questionnaire. It addresses cars, pedestrians and cyclists.

For full responses from each candidate on cycling, visit salisburybicyclecoalition.org.

Although Salisbury has few bike lanes, Alexander said the city has a good start.

“We should have more and safer places for bicycling as a transportation mode,” Alexander said.

She mentioned Salisbury’s Bicycle Master Plan and Complete Streets Plan for East Innes and Long streets as positive steps, but mentioned funding and incremental implementation of the plans as a necessity.

One of the coalition’s questions asked about making bicycle and pedestrian facilities standard on all road construction. Alexander responded that she supported Salisbury working with the Department of Transportation to fund more bicycle lanes as roads are improved.

“I think that there would have to be a referendum on the ballot so that citizens could decide if they wanted more taxes levied to fund a requirement for bicycle lanes in all new roads,” Alexander said. “Until then, I support an integrated implementation per the Bicycle Master Plan as roads are improved and funded.

“Having bicycle-friendly roads is an important feature we need to implement,” Arthur said. “All future road repairs should include bicycle safe lanes and facilities. Sidewalk repair should also include the implementation of bicycle racks and bicycle parking.”

He didn’t, however, talk about funding future bike lanes.

Blackwell called Salisbury’s current bicycle facilities inadequate. She said her own street has “sharrow” markings — intended to tell motorists to share the road — but isn’t sure many bikes utilize them.

“The city at large has very little accommodation for cyclists,” Blackwell said. “Our city leaders and citizens have to realize that bicycles are a legitimate mode of transportation. An attempt three years ago to add bike lanes to Statesville Boulevard failed because the citizens said, ‘No one bikes on Statesville.”

“If conditions were safer, there would be cyclists,” she said.

Blackwell said she would support putting bicycle lanes and facilities on roads where “it makes sense.” She said it’s cheaper financially to build bicycle facilities at the start of construction than retro-fitting roads.

Johnson said the city’s and county’s bicycle facilities are poor. She said adding bicycle lanes throughout the region and Salisbury are important. Adding bike lanes would be one of her priorities if elected, she said.

In her responses, Johnson proposes a number of capital projects with links to her Facebook page. She uses the capital projects as examples of ways to increase the use of bicycles as alternate modes of transportation.

In his response, Kersey rates bicycle facilities in his area — Fulton Street — as a four on a one to 10 scale.

“I like my bike but have only been able to ride around the neighborhood,” Kersey said. “To venture onto Highway 150 would entail great risk for a rider like me. I realize that it may be impractical for major highways such as 150 to accommodate the novice rider, so safe connectivity between biking, walking, running paths is a priority.”

When searching for a community to live in, people look for amenities that easily allow walking, running and biking, Kersey said.

“I think that efforts designed to improve the livability of our city need to be leveraged to address all three of these activities,” he said.

When asked if he would support including bike lanes in all future roads, Kersey said it wouldn’t be appropriate in all cases.

Citing a number of plans and ordinances that the City of Salisbury has adopted, Lewis said “We must have elected leaders who will stand up for the adopted plan and put in bike lanes whenever and wherever we can.”

He said improving safety is a first step to increasing the use of bicycles. He cited the Complete Streets plan for Innes and Long streets as a good example of prudent bike lane design.

“I believe that we need to convert our downtown streetscape to a more pedestrian-friendly design which will encourage folk to ride their bikes downtown as well.

“We must convert to a multi-modal city,” Lewis said.

When asked what can be done to increase the use of bicycles, Miller didn’t give a specific answer. Instead, he said Salisbury could provide opportunities for safe travel by bike for recreation and transportation if citizens are interested. An increased use of bicycles won’t happen if safety is a concern, Miller said.

“I am in favor of encouraging full bike paths, but would not make it a requirement,” Miller said. “Full implementation of the city’s master plan will occur over many years and will involve incremental progress.”

Paris was the only candidate to say he was unfamiliar with bicycle facilities. However, Paris said he has used the city’s greenway system.

He didn’t explicitly express an opinion on Salisbury’s bicycle facilities other than saying downtown bike racks appear to be underutilized. Similar to other candidates, Paris said Salisbury needs to continue implementing the 2009 comprehensive bicycle plan.

When asked about making bicycle and pedestrian facilities standard for all new road construction, Paris focused on the cost and location of the proposed construction.

“It depends on the area, street, cost and whether DOT funds will be able to assist,” Paris said. “I am in favor of accommodating bicycles where reasonable, feasible and prudent.”

He said the only way to increase the use of bicycles is to create more bike lanes that could be maintained properly.

“Cities that are bike and pedestrian friendly are not only better places to live, but also attract more people to want to live there,” Post said.

He said it can be difficult to ensure any aspect of Salisbury’s master plan is implemented in a timely way.

“As it is, both the staff and financial resources are constrained — not enough time to do everything and not enough money to get everything done.”

When asked if he wanted to offer further comments about cycling in Salisbury, Post said he would be in favor of narrowing Main and Innes streets to add bike lanes.

“More of these routes need to be added to major roads to improve safety of all people,” she said.

Sheffield said a more visible cycling community would encourage a greater number of people to use bikes as an alternate mode of transportation.

Sheffield didn’t explicitly say whether she would support making features such as bike lanes standard on all new construction.

“Many of the road plans for the coming year have already been determined,” she said. “However, someone needs to be asking about implementation.”

Watkins didn’t extensively talk about bike lanes in his answers. Instead he mentioned getting bicycles off of busy roads.

When asked to rate existing facilitates in his area, Watkins said “We can always use another shop in Salisbury, N.C. If one shop (doesn’t) have what someone is looking for, maybe the other shop can help them to find just what they need.”

When asked about increasing the use of bicycles as an alternate mode of transportation, Watkins said Salisbury should make back roads safer for bikes.

He said bike lanes should be on back roads. Watkins said no one should ride a bike on Innes or Main streets between 8 a.m. and 6 p.m.