Carson improves to 8-0 with shutout of visiting Robinson 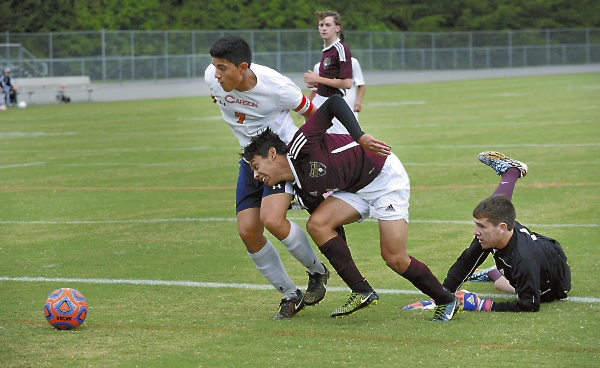 Wayne Hinshaw/for the Salisbury Post ... Carson’s Ricky Maldonado (7) gets past Robinson’s Jose Arellano (8) and the goalkeeper, Justin Wohlfarth, to find an open goal and score for the Cougars. Carson improved to 8-0 on the season with the 4-0 victory.

CHINA GROVE — Anyone who wants to play follow-the-leader in the SPC will have to line up behind Carson’s boys soccer team.

The two-time defending conference champions may or may not be the cream of the league, but they remained unbeaten after blanking visiting J.M. Robinson, 4-0, on Thursday.

“Coming in, I knew there was talent here,” first-year coach Ryan Winchip said after the Cougars (8-0, 7-0) scored three first-half goals and recorded their second shutout. “We just had to put everyone in the right place.”

That happened often enough against Robinson (3-5, 3-4) — even if Carson didn’t play its best match. “Our energy was low,” said senior midfielder Ricky Maldonado. “This was our third game this week and the time change (an early, 4:30 p.m. start) may have gotten to us. Still, we dominated possession. We did what we had to do.”

They did. Carson opened the scoring just 10 minutes into the match when Maldonado took a feed from teammate Colton Correll and slipped a 6-yard shot past Robinson keeper Justin Wohlfarth. “Colton gave me a nice through ball with a defender in front of me,” Maldonado said after notching his ninth goal. “I was able to beat him and push it in.”

Seven minutes later, all-state forward Brandon Flores netted the Cougars’ second goal. He took a pass from Maldonado, advanced down the left side and whipped a low, hard shot past Wohlfarth.

“It was kind of like a wall pass,” said Flores, now a 13-goal scorer. “Ricky put me in great position to score.”

That’s something Carson has done routinely this season — and Winchip had an explanation.

“We’ve had to shuffle some players around on defense,” he said. “But on offense, we’ve got (Flores). He works harder than anyone on the field. Teams have to commit double or triple coverage on him and that opens up slots outside. You work the ball outside and play it in through the middle. We’ve scored a lot of goals that way.”

That strategy, said Correll, is a product of Carson’s air-tight team chemistry. “We communicate well and know how to move the ball,” he said. “We know each other’s strengths and weaknesses. That’s why we play so well together.”

Carson took a 3-0 lead with nine minutes remaining in the first half when junior Raunel Vasquez — who had just entered the game as a substitute — buried a 10-yard drive from the right side. Second-half highlights included a sliding save by freshman Eric Turnbull, who relieved starting keeper Grayson Owens, on a penalty kick by Robinson’s Daniel Rivera’s with 14:06 to play.

“I was disappointed on that shot,” said Bulldogs’ coach Teewon Vaye. “Usually we hit those. He should have gone windows but he took a power shot instead.”

Winchip was clearly impressed with Turnbull’s nimble reaction. “He just timed it right,” the coach said. “He’s quick like a cat. I think he’s gonna be a star for sure.”

Another star, teammate Pedro Perez capped the scoring when he pushed a close-range shot into the net with 1:17 to play. “I don’t think they were expecting that,” he said afterward.

The victory set the stage for Monday’s conference showdown at Marvin Ridge. “That’s the true test,” said Winchip. “They’re like No. 4 in the state. We’ll find out how good we really are.”