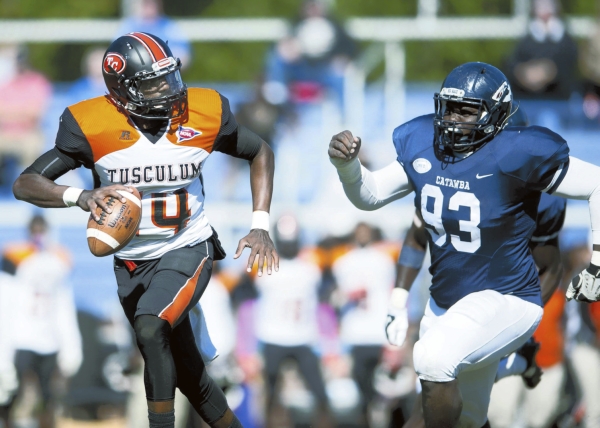 SALISBURY — Catawba nose guard Jonathan Jean, one of the heroes of Saturday’s 14-7 win at Carson-Newman, nearly slipped through the cracks.
Playing in the Jacksonville area in 2011, he was a third-team all-state offensive lineman in Florida’s 7A classification, but he wasn’t heavily recruited.
“I was thinking I wouldn’t be playing football in college,” Jean said. “There had been a lot of interest my junior year, but I broke my femur (thigh bone) and the recruiters disappeared. But then one day at school, they told me I had a call from a coach. I always believed it was a miracle.”
That coach was Catawba defensive line coach Radell Lockhart. Not long after their first contact, Jean traveled to Salisbury to check out Catawba. It was more than 400 miles from home, but it proved to be a worthwhile venture. Lockhart and former Catawba assistant Khanis Hubbard successfully recruited Jean.
“Catawba was a welcoming place,” Jean said.
One other school got interested in Jean — Lenoir-Rhyne — but he was ready to commit after seeing the Catawba campus.
“You have to search long and hard to find guys big enough and strong enough to be defensive linemen,” Catawba coach Curtis Walker said. “A lot of schools go to Florida to recruit because there’s a lot of talent there. It’s a good thing that Catawba got a good one out of there.”
Jean was a key reserve as a true freshman in 2012.
The arrival of Walker, defensive coordinator Keith Henry and a mostly new staff prior to the 2013 season brought new schemes. Jean blossomed as the nose guard in a 3-4 defense in 2013. He had three sacks against Wingate, made 39 tackles and was named second team All-South Atlantic Conference.
After that sophomore breakout, there were major expectations for his junior season, but he tore cartilage in his right wrist.
“I didn’t want to redshirt, so I moved from nose to end and basically played with one hand,” Jean said.
He managed 33 tackles, including a sack against UNC Pembroke.
Jean is fully healthy as a senior and benefited physically from spending the summer in Salisbury.
“I worked out and trained hard,” Jean said. “I lost 26 pounds.”
Listed at 6-foot-3, 280 pounds, he’s back home at nose guard now. He conducted a nose-guard clinic at Carson-Newman.
The nose guard’s thankless job is to force two men to block him, giving his team a numbers advantage and the opportunity to make plays. But if an opponent believes it can block the nose guard with one lineman, then it’s up to the nose guard to make plays himself.
That’s what happened Saturday. Carson-Newman chose to solo-block Jean. He was in on 12 tackles.
“When you play an offense like Carson-Newman’s, there’s never a perfect call,” Henry said. “You just have to play hard and execute and force a negative play that puts them behind schedule. “You’ve got to put them in second-and-10, third-and-9. If you can do that, you can stop them and make them punt.”
Carson-Newman had 12 offensive possessions on Saturday. Carson-Newman scored once, and the end of the first half ended one possession. Catawba’s defense halted the other 10. Carson-Newman punted seven times, had a field goal blocked, and was stopped twice on fourth down.
Jean was in the middle of all of it. Six of his tackles were plays that put Carson-Newman behind schedule.
“It was mostly because of my experience,” Jean said. “It was the fourth time I’ve played against their system. They’ve got a tough offensive line, but I knew what they were going to do and when they were going to do it.”
In the first quarter, Jean tackled quarterback De’Andre Thomas for a loss on a third-and-3, and Carson-Newman punted.
In the second quarter, Jean and C.J. Barksdale stopped a third-and-4 run by Thomas, and Carson-Newman punted. On Carson-Newman’s next possession, a first-down sack by Jean led to a Carson-Newman punt.
In the fourth quarter, Jean halted a second-and-10 play after a 1-yard gain, Catawba stopped third-and-long, and a fourth-down field-goal attempt was blocked.
“Our punter (Chad Hollandsworth) was a big factor,” Jean said. “He kept them backed up the whole game, making them go 80 or 90 yards to score.”
With seven minutes left, Jean made the tackle on a third-and-3 play for a gain of 2 yards. That led to a Carson-Newman timeout and the decision to go for it on fourth-and-1. Linebacker Jamal Lackey, with assistance from Jean, disrupted that pivotal fourth-down play for no gain.
“Jamal made a great play, controlling his gap, shedding a blocker and stopping the ballcarrier,” Jean said. “All I did was help him secure the tackle.”
Examining the stat sheet, Jean was impressed that the Eagles were limited to 185 rushing yards on 45 attempts.
“We set a standard for our defense,” Jean said. “Now we’ve got to uphold that standard every week.”
The Indians (2-1, 1-0 SAC) can’t count on Jean for 12 tackles every week, but they can count on him to do his part.
“He’s grown a lot the last few years,” Walker said. “He’s become a full leader for us.”
Catawba hosts Wingate at 6 p.m. on Saturday. Jean’s family only gets to see him play once or twice a year, but this is Family Weekend. They’ll be at Shuford Stadium to watch Catawba’s defensive player of the week go against the Bulldogs.

By Mike London mike.london@salisburypost.com SALISBURY — “That’s out!” yelled Salisbury libero Abby Lee, as she pointed toward the wall of... read more