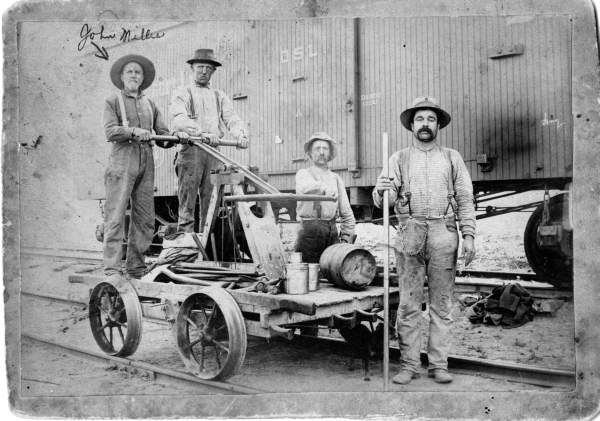 Joe Williams, who lives between Granite Quarry and Faith,brought in this photograph from a family album that once belonged to his grandmother. He judges it to be 130 years old. Pictured at the far left in the photo is John L. Miller, son of Peter Miller and Polly Josey. John Miller was born near Gold Hill and baptized at Organ Lutheran Church Oct. 12, 1836. He relocated with his family to Wilkes County in 1843, and during the Civil War in 1862, he enlisted in Company C of the 30th N.C. Regiment. Miller was wounded at Manassas Gap, Va., and had to have his right leg amputated. He became a prisoner of war and was held in the Union prison at Cape Lookout, Md. After the war, he returned to Wilkes County and married Sarah Wright, first cousin of Judge R. Lee Wright of Salisbury. Sarah Wright also was a sister of Williams’ great-grandmother, Lamara Lucinda Wright. Miller became a Morman and relocated to Bingham Junction, Utah, where he was employed as a section foreman for the Denver and Salt Lake Railroad. That railroad eventually became part of the Union Pacific Railroad. Williams says this photograph has to have been taken around 1885, because Miller moved to Utah in 1884.