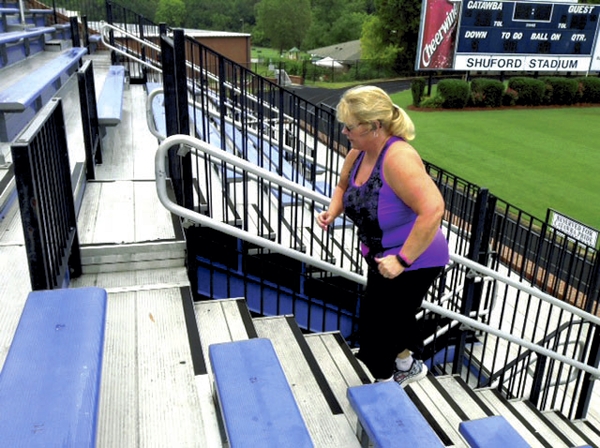 David Freeze column: Brent and Norma, plus one

When I first met Kristy Bell, I found a 40-year-young woman who hoped for a major turnaround in her life. Two years ago, she had suffered through double pneumonia and  something called “Farmer’s Lung.” Farmer’s Lung is an infection usually found in certain farming areas. After a stint on a ventilator and six days in a coma, Kristy could no longer sit up, raise her arms to eat, walk or dress herself.

Intensive rehab followed, providing retraining in how to do her “ADL”, or activities for daily living. Her weight had ballooned as high as 555 pounds, further limiting Kristy’s ability to do basic things. She couldn’t drive or do the usual things that women enjoy. Shopping was no longer possible, nor were visiting friends and family and going to weddings. Her blood pressure was sky high until controlled by medication. Still, Kristy believed that she could turn all of this around, and after meeting her, so did I. But the road will be long.

I was first made aware of Kristy’s situation by Carole Brooke, her attorney in China Grove. Everyone involved, and especially Kristy herself, wanted a new direction. Her doctor had prescribed an exercise program for Kristy, one that she could physically do, with reachable goals. Until two years ago, Kristy went to work in day care every day. She hopes to one day return to work. Carole knew about Norma Honeycutt and Brent Parks, so she asked me if I would consider adding another and possibly more challenging person to our group.

Kristy had not walked without support for the two years since her hospital stay. I have been fortunate to have developed a wonderful team of professional friends who have helped with various situations over the years. Many of these are already involved in the Brent and Norma adventure, and some will be helping with Kristy as well.

Brent and Norma have four more months left on their program, and Kristy’s program is renewable every two months. My major partner on her plan is the South Rowan YMCA. Aaron Crowe, aquatics director, has given Kristy permission to use the Y facilities and she has committed to do exactly that. A large part of her work, at least in the beginning, will be in the pool. I will have input from Val Velte, Novant Health Rowan Medical Center wellness coordinator and a registered nurse herself. Val makes regular visits to the Rowan County YMCA facilities to answer questions and provide basic testing for members.

We are now three weeks into Kristy’s program and there have been some significant positives already. She has lost 27 pounds by following and monitoring her diet restrictions with myfitnesspal.com. She knows that such results will not be the norm. Our goal is to incorporate gentle exercise and gradually build momentum. Her first walk without support was about 40 feet, a distance that may seem insignificant to most, but it was incredibly important to Kristy and me. Before her first workout was complete and with plenty of rest involved, her walking totaled over 400 feet.

Currently, Kristy can walk almost 200 feet without supporting herself or stopping to sit down. She walked into her doctor’s office on Thursday without support. Kristy’s goal is to not only return to work, but also to be able to comfortably walk through a grocery store or Walmart. The wheelchair is heavy and is awkward to load in the car, so Kristy and her mom will celebrate the day when it is no longer needed even as a walking aid.

Now for an update on Brent and Norma. Both had their inches and weight done right after Labor Day by fitness staff member and personal trainerTammy Swicegood at the JF Hurley YMCA in Salisbury. Norma’s inches continue to decrease while her weight loss has slowed somewhat. Norma has continued to challenge herself with a variety of workouts. Some of the most challenging have been the high intensity spin classes and a new regular staple, running the stadium steps at Catawba’s Shuford Stadium. She has another 5K race coming up.

Tammy cautioned Norma about letting her food choices sometimes not match her goals and also about the need to track her calories every day. She is now back on track and expecting a good month of September. One of Norma’s best comments on the month of August concerns a developed habit. She said, “This morning I was on the way to work and just mindlessly turned into the Y because I do it so often.” I think that is a positive within itself.

Brent has admitted slipping during July and August but is now refocusing on his goal of better health. He has committed to a better report in the next Post update. Brent is now tracking his calories on myfitnesspal.com and has promised to get back in the habit of daily workouts.

So now, we have a team of three individuals who have all realized that the only choice for them is to become an active part of the process that will eventually achieve long time goals of better health. Look for the next update in early October that will include the results for September. As always, when you see Brent, Kristy and Norma around, say hello and offer encouragement. They really appreciate it.

By Mark Wineka mark.wineka@salisburypost.com SALISBURY — These bootprints leave a mark. On the floor and in display cases of Rowan Museum’s... read more