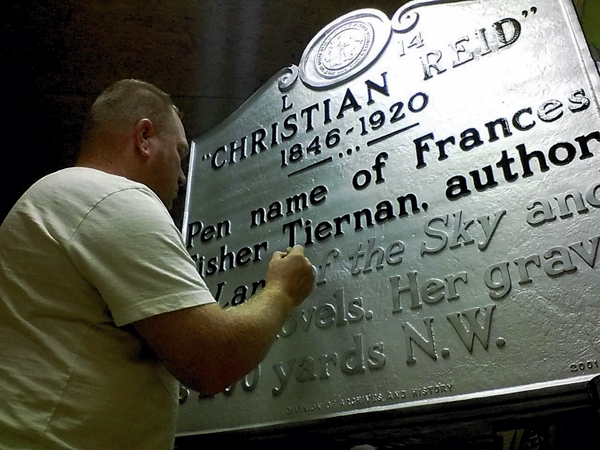 James Lambert repaints one of the sides of the Christian Reid highway marker. Photo courtesy of James Lambert

SALISBURY — After many years — 76, actually — the N.C. highway historical marker for Christian Reid has been corrected.

The years denoting her life’s span are now right — 1846-1920. When the highway marker was first installed outside the South Main Street gate of Chestnut Hill Cemetery in 1939, it had the year of the noted author’s birth as 1864, not 1846.

Even when the marker had to be replaced in 2001 after it was struck by a car and damaged, the new marker again had the wrong birth year. It took a combination of historian Betty Dan Spencer, City Cemetery Coordinator Linda Davis, Ansley Wegner with the N.C. Office of Archives and History and James Lambert with the local Department of Transportation to set things right.

Christian Reid was the pen name for Frances Fisher Tiernan, one of Salisbury’s most prolific and celebrated authors. Her 1876 novel, “Land of the Sky,” became the way the world described the mountains and scenery around Asheville.

The incorrect date on the state historical marker bothered Spencer for a long time, and she gives Davis most of the credit for finally getting it fixed.

“I told them years ago,” Spencer said. “Linda got it done.”

In June, Spencer asked Davis to investigate how the marker might be corrected. Spencer had tried to contact officials in Raleigh about the marker but had no success.

An online search took her to the website for the N.C. Office of Archives and History, and she sent an email to Ansley Wegner, a research historian. Davis told Wegner of Spencer’s frustration, and “She came right back to me the same day,” Davis said.

Wegner determined that rather than replacing the sign, the best solution might be to treat a change as a repair, which could be handled by the local office of the N.C. Department of Transportation.

Wegner told Davis she would contact the DOT, and if there was enough money in the end-of-the-fiscal-year budget, the correction probably could be made.

Davis noticed the DOT pulling up the Christian Reid marker Sept. 2. James Lambert with the DOT took parts of three days filing off the wrong numbers, pop-riveting new numbers in place and repainting the gray and black on both sides.

When the 2001 replacement sign went up, the paperwork for that sign included the correct year, but somehow the documentation was lost and the mistake was made again, Davis learned.

Tiernan was given the Medal of the Order of the Golden Rose from the Literary Society of France, and in 1909, she received the Laetare Medal, the highest honor given a lay person in the American Catholic Church. It was presented annually on the fourth Sunday of Lent by the University of Notre Dame.

Tiernan was the first Southerner to win that distinction.

All told, about 40 of Tiernan’s novels were published, in addition to short stories, travel notes, poems and two dramas, including “Under the Southern Cross,” the proceeds of which went toward the fundraising for the Confederate monument in Salisbury.

Tiernan recited her poem “Gloria Victis” at the monument’s unveiling in 1909.

Historians says she adopted the pen name Christian Reid because it couldn’t be readily identified as belonging to either sex.

Besides the highway historical marker, there are other tributes to Christian Reid. A book-shaped monument to her once stood on a traffic island at Fulton and Innes streets, but it was eventually moved to the Rowan Public Library.

In 1928, a bronze tablet on a granite boulder was dedicated to Christian Reid at Calvary Episcopal Church in Fletcher, which is near Asheville. An impressive cross of Rowan County pink granite was erected at her Chestnut Hill grave in 1947.

The new historical marker for Christian Reid might not be at the safest place. Davis said vehicles have knocked down three different utility poles in that same area over the past year.