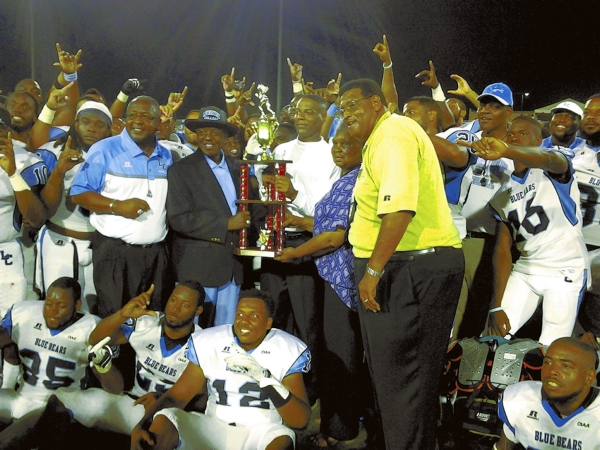 Livingstone College’s football team played very well in its season opening, 49-6 win at Benedict last Saturday, but like any head coach, Daryl Williams found some things to work on this week.

One of the few blemishes in the Blue Bears’ performance in Columbia, S.C., was nine penalties for 81 yards. And several of the holding calls didn’t come from the usual place, the offensive line, but from the receivers’ group.

“It was a little discouraging to get holding calls from the receivers but we can get that corrected,” said Williams. “The holds came from not moving their feet and not being aggressive enough, but on the bright side, they didn’t drop any balls.”

“We’re very happy and excited about getting our first win and we came out of the game with no one getting hurt,” said Williams. “And the defense especially played well, holding Benedict to 217 yards. There were just a whole lot of positives that came out of the game.”

One of the positives was senior Jalen Hendricks’ return from the broken finger that kept him out of the final two games in 2014. Hendricks, the CIAA’s Offensive Player of the Year last season, picked up where he left off with 10 catches for 159 yards and a touchdown. On Monday, he was named the CIAA’s Receiver of the Week.

Surprisingly, quarterback Drew Powell was not the conference’s QB of the week. Powell passed for 231 yards, ran for 125, threw for two scores and ran for another. Still, he was beat out by Bowie State quarterback Matthew Goggans, who passed for 313 yards and three TDs in a 35-32 win over Merrimack (Mass.).

“I was glad to be back on the field with my teammates,” Hendricks said at Tuesday’s press conference. “It was another day at work. We try to out work everybody, day in and day out.”

Hendricks said that at the beginning, Benedict tried to contain him, which opened up the passing game for other receivers. Six other Livingstone receivers caught passes but Hendricks then got his turn.

“They (Benedict) focused on me so much at the beginning but when the other guys came through, it opened things up for me,” added Hendricks, who added he and Powell have a special connection on the field. “Drew and I just click … when I get open, he just seems to know it and he gets me the ball.”

Williams also praised the offensive line’s play against Benedict as it allowed no sacks of Powell. The group, led by center Shaquelle Sharperson,  opened holes and kept Powell upright to the tune of 604 total yards.

In addition to Sharperson, the offensive line included tackles Michael Green and Ekanem Ekanem and guards Will Odomes and T.J. Jefferson (East Rowan). Jefferson, a former nose guard at East Rowan, transferred back to Livingstone this year.

Running back Jarius Richardson also had a break-out performance, rushing for 82 yards on 17 carries and two touchdowns. Like Hendricks, Richardson hails from Nash Central High School in Nashville, N.C. Richardson’s twin brother, Jarod, is a safety at Livingstone.

The Blue Bears travel to Virginia University of Lynchburg this Saturday for a 1 p.m. contest. Unfortunately, VU-Lynchburg is a non-NCAA opponent and will not count as a win or loss in the Blue Bears’ effort for a winning season.

VA-Lynchburg lost to Elizabeth City State, 71-0, last week, but the CIAA website still has the Vikings’ won-loss record at 0-0.

Livingstone defeated VA-Lynchburg last year, 60-12, in Salisbury. The game counted last year but this summer, the NCAA released a list of 34 non-countable schools for the 2015 season. That list was announced after Livingstone’s schedule was announced.

By Dennis Davidson dennis.davidson@salisburypost.com After a long, tiring day of grueling competition, teammates Andrew Morgan and Phil Miller each had... read more