Kannapolis picks STEM teacher as Teacher of the Year 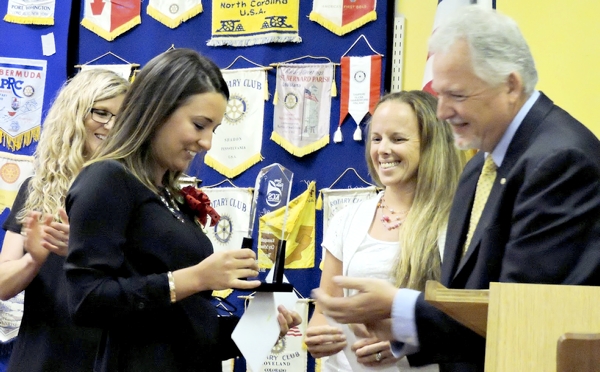 Anyone lucky enough to walk into Jacki Lane’s classroom at Jackson Park is likely to see rocket ships, roller coasters and race cars instead of text books.

In fact, Lane once thought she would spend her career as an astronaut after she took a childhood field trip to the Challenger Space Center in Wheeling, W.Va. Instead, she is combining her love of science with a passion for teaching and inspiring the next generation of NASA engineers inside her classroom.

Lane began her career seven years ago as a third-grade teacher at Jackson Park. However, her ability to teach and her passion for science made her a perfect fit to fill the role of STEM teacher (Science, Technology, Engineering and Math) for the entire school. She now teaches every student at Jackson Park and has a gift for inspiring her students. She recalls one child telling her, “Ms. Lane, I just discovered your secret! You tricked us into learning. We were having so much fun; we forgot we were doing math and science!”

Lane’s lessons center on solving real world problems such as creating technology to clean up an oil spill or designing the next NASA rover. She teaches her students to use the engineering design process to ask questions, imagine solutions and work together to plan, create and improve their ideas.

“I want my students to realize that what they are learning in school is not to prepare them for some big test at the end of the year,” Lane said. “Instead, I want them to develop the skills that are necessary to solve problems in the real world.”

“She wants to open doors to students that they did not know existed,” Anderson said. “She is passionate about meeting the needs of students, and nothing stops her from doing so. There is nothing that she cannot do.”

The director of the Discovery Place Education Studio, Stephanie Hathaway, says Lane is a unique and talented teacher.

“I have worked with Jacki in many capacities over the last four years, and I am always impressed with her tireless dedication to her students and colleagues as well as her passion for the field of education,” Hathaway says. “She has the type of work ethic, passion, creativity, motivation and personality it takes to make anything happen. For Jacki, teaching is a mission, not a profession. We are very fortunate to have her working in North Carolina.”

Lane was one of the first teachers to become part of the STEM Fellows Program at Charlotte’s Discovery Place Science Museum. In fact, she was the only teacher chosen to speak at the grand opening of Discovery Place’s Education Studio, which is set up to provide STEM resources to teachers in the Charlotte region.

Lane also develops partnerships with the North Carolina Research Campus and other community organizations. She created an educational garden at Jackson Park through Lowe’s and has scientists from the Plants for Human Health Institute at N.C. State University work with her students. The NCSU researchers show students what they do in their labs and teach them about the biology of the plants the students are growing at Jackson Park.

Superintendent Dr. Pam Cain says Lane is an outstanding teacher and very deserving of Teacher of the Year honors.

“Jacki Lane is the type of teacher that makes Kannapolis City Schools and public education so wonderful,” Cain said. “She inspires students, involves parents and the community and advocates for children. She is a tremendous representative of Kannapolis City Schools, and I am very proud that she is part of our district and our Teacher of the Year.”