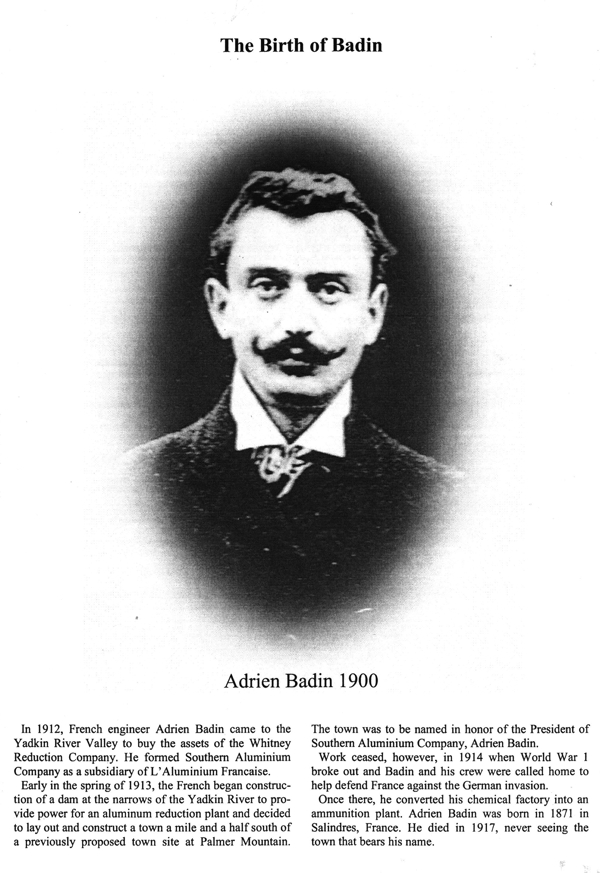 The town of Badin is named for Frenchman Adrien Badin, seen here on a page from the book, 'Badin, North Carolina: the First 110 years." For the Stanly News & Press

The little town of Badin, which celebrated its centennial in 2013, has an unparalleled history that needed to be told. Now it has been.

The history of Badin is in book form, recently published in hard cover by Diversified Graphics of Salisbury. The title is “Badin North Carolina: The First 100 Years.” It’s the result of a labor of love that took four years.

“John Westbrook and I started it and worked on it about two years,” said David Summerlin, director of the Badin Museum. “We tried to write as much as we could, then Jay edited it.”

“All the members of the museum were a big help,” said Summerlin. “There was a lot of reading to avoid errors and misspellings.”

Though 1913 marks the beginning of the town, the book goes back 12,000 years. That’s when archaeologists believe Native Americans first arrived in the area, leaving artifacts in abundance at the Hardaway Site and on Morrow Mountain.

The modern history dates to 1901, when E.B.C. Hambley, a mining expert from England, began construction of the Whitney Dam near Palmerville. He received funding from George Whitney of Pittsburgh, Pa., who also provided his name to the project.

But with the dam and a canal nearly complete, bankruptcy ended construction in 1907. The property was sold to the North Carolina Electric & Power Co. in 1910. Then in 1912, a French company, L’Aluminium Francaise, bought the Whitney holdings with the intention of finishing the dam and to build a town on Palmer Mountain.

“Then engineers studied the Yadkin River and found a site called The Narrows and thought they needed the dam there,” Summerlin said. “They abandoned the Whitney Dam.” Work began in June 1913 at The Narrows while designers laid out the town of Badin, named for Adrien Badin, a French engineer and the company president. L’Aluminium Francaise wanted to build a hydroelectric plant on the dam to provide the huge amounts of electricity necessary in the aluminum reduction process, Summerlin said. To house the approximately 3,000 workers, the French built nearly 100 buildings, most in the European style. There were quadriplexes, duplexes and apartments. The streets were laid out to follow the natural curvature of the land, all streets leading back to downtown.

But the French never saw the completion of the project. When World War I broke out, they returned home to fight for their country, said Summerlin. That’s when the Aluminum Company of America — Alcoa — came in. Arthur Vining Davis and Andrew Mellon bought the holdings and restarted the work in April 1916. But in July of that year, a record 22 inches of rain in 24 hours “wiped out a lot of the project,” Summerlin said.

“Fourteen months later, they finished and filled the lake in June 1917. It was quite a feat.” The dam was 60 feet across at the bottom, 1,500 feet at the top and 220 feet high. It was the largest dam in the world until completion of the Hoover Dam in 1934. All that and more are in the new history book.

Summerlin said Alcoa gave the museum more than 2,000 8-by-10 photos that record the construction of the massive undertaking and the manufacturing process. The book is about more than just dams and aluminum. For instance, the Badin Fire Department, established in 1916, is the oldest in Stanly County and the Badin Hospital, opened in 1917, is also the county’s first.

The book contains histories and photos of the old Badin Theater, Alcoa Dairy, churches, businesses, schools, sports teams and civic groups. For decades Alcoa owned and controlled Badin. It wasn’t until 1990 that the town was incorporated and a board was elected. Meanwhile, Alcoa, which had replaced the original aluminum factory in 1963, closed its manufacturing plant in 2006.

The company still runs the power plant and sells the electricity produced. The history book includes the centennial events of 2013. It is filled with photographs of the town and its people throughout the years.

Mack Williams: Just around the corner

I recently saw some bikers on the road. Perhaps I should say “bike riders” instead of “bikers,” because when an old,... read more