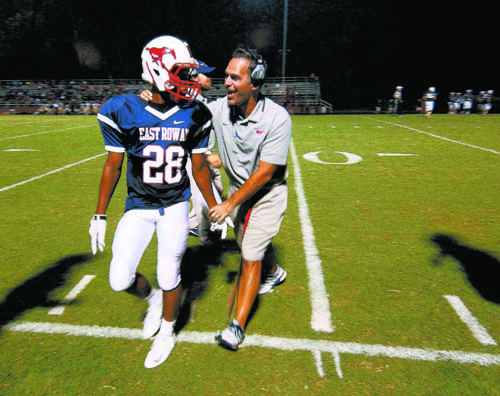 GRANITE QUARRY — If you couldn’t find Keith Tillman Friday night, all you had to do was look in the end zone.

The East Rowan thoroughbred made four — count ’em, four — appearances in the end zone as the Mustangs routed visiting Salisbury for their first victory.

“I know I was good,” Tillman said after rushing for three touchdowns and snagging a 16-yard TD pass from quarterback Max Wall. “But winning is more important to me. As long as we catch the win, I’m happy.”

East will do its share of that as long as Tillman, a junior running back with the perfect confluence of speed and power, continues to shine. At 5-foot-9 and 170 pounds, he doesn’t scare opponents the way Wall does. But he brings something all successful teams need.

“Keith has a whole lot of heart,” said teammate Sawyer Kimmer, a 280-pound anchor on the offensive line. “For a 160, 170-pound guy, he lowers his head and delivers the boom.”

In last week’s 33-0 triumph, Tillman carried 15 times for 114 straight-ahead yards and scored a touchdown in each quarter. An eight-quarter player last season, he notched his first varsity TD on a 2-yard burst behind Kimmer, East’s forceful right tackle.

“I wasn’t thinking about having some monster game,” Tillman said. “It was just what I saw, I took. The holes that the line was creating, that’s what I looked for.”

Both Tillman and Wall were quick to laud the work of East’s offensive line, a yes-we-can unit comprised of Landon Tuck, Baxter Ketchie, Lucas Hedrick, Cole McGraw and Kimmer, the lone senior. “Coach (Nate) Santiago teaches us right — taking the right steps, getting our hands in the right position, getting our heads across the defenders’ bodies,” Kimmer said. “If we break one guy, we’re moving downfield and helping a buddy out.”

That buddy was Tillman. His second-quarter reception gave the Mustangs a 14-0 lead and his 18-yard romp for a score made it 20-0 late in the third period.

“The third touchdown,” Tillman said. “That’s when I felt we could win the game. We were running a fast-tempo offense, setting up before the defense could set up. Before they could get organized, we were already ready to go.”

Tillman saved his best for last. He gained 56 yards in the fourth quarter — including 35 on a second-and-4 handoff — and capped a nine-play scoring drive with an explosive, 13-yard touchdown blast up the middle with 9:41 remaining.

East coach Kenneth McClamrock called Tillman, a quiet leader, the team’s “hidden talent,” and added: “Last year he had a little bit of a fumbling problem and a memory problem. But Keith’s worked his butt off to get better. He takes coaching well, which is the best compliment I’ll ever give a kid. He never complains, he does what we ask the first time and he’s willing to sell out for his teammates. I’m glad we’ve got him.”