So is laughing while black an offense now? 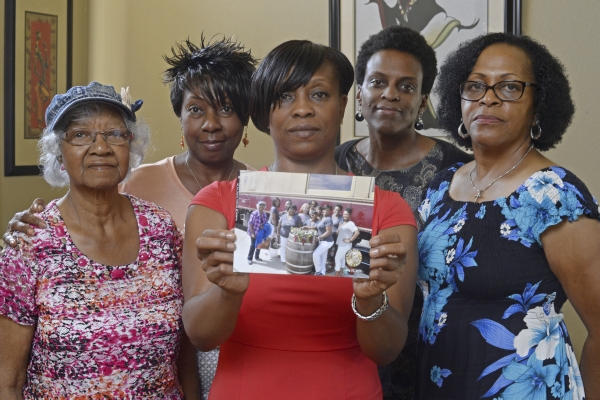 Five members of the Sistahs on the Reading Edge book club, from left, Katherine Neal, Georgia Lewis, Lisa Renee Johnson, Allisa Carr and Sandra Jamerson, stand together at Johnson's home in Antioch, Calif., o, Aug. 24. The five were among 11 African-American women who were were booted off the Napa Valley Wine Train. Johnson holds a photograph of the group that was taken before boarding the train. (Jose Carlos Fajardo/Bay Area News Group via AP)

The issue of “driving while black” has long been documented. But the latest social media firestorm was born from an instance of “laughing while black.”

A group of 11 women belonging to a book club, 10 of whom were African-American, were kicked off a Napa Valley wine train in California for being too loud. Lisa Johnson and her fellow club members chronicled the incident on social media, and their account went viral. The management of the wine train subsequently apologized and offered to make amends by offering a private dining car to the club and 39 of its members’ friends. (Management also claims it kicks white folks off the train at least once a month for being noisy.)

Yale professor Elijah Anderson and University of California, Berkeley professor Nikki Jones have analyzed the way white people react to people of color in so-called “white spaces” and how blacks are “policed” by other patrons and by management in restaurants, theaters and other public places. Black and brown children and adults are more likely to be shushed, stared at or kicked out of places where white people perceive that they do not fit.

After hearing about the recent incident, Norma Ruiz, a Latina, went public with her experience on the same Napa train that ejected the book club. She described how she was asked by another patron to quiet down. Her group _ all Latinas _ moved to a different area of the train and was then warned by staff, though not booted off the train. Ruiz had booked her birthday celebration on the train because when she rode it on a previous occasion, she saw a group of white women being boisterous and having fun.

As a society, we need to come to grips with the way people of color are judged and punished for behavior that is seen as harmless when performed by white people. This phenomenon is really about black and brown people having the nerve to make ourselves visible when we are still living in an era of Ralph Ellison’s “Invisible Man.” It’s OK to be a person of color as long as you are not noticeable.

Let’s hope all the attention to laughing while black raises public consciousness, lifts the burden of public opprobrium and allows black and brown people to cut loose and have fun.

This article is available to Tribune News Service subscribers. Tribune did not subsidize the writing of this column; the opinions are those of the writer and do not necessarily represent the views of Tribune or its editors.