Editorial: ‘Assault on the very fabric of society’ 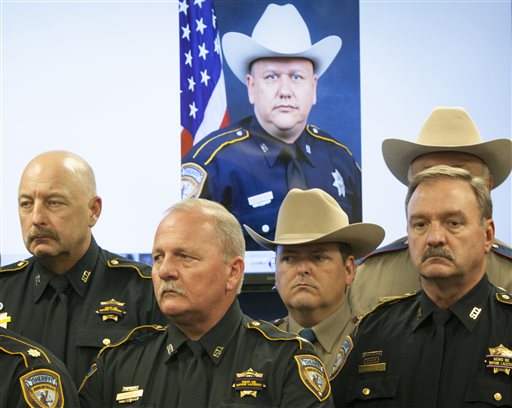 A deputy pumping gasoline into his cruiser takes a bullet to the back of his head, falls to the ground and then gets shot 14 more times. Why?

Authorities in the Houston, Texas, suburb where Deputy Darren Goforth was killed say suspect Shannon J. Miles has given no clues as to motive. So they filled the void with the speculation that Goforth was killed because he was a uniformed officer.

Harris County District Attorney Devon Anderson responded with eloquence and grit as she called on the public to respect and support law enforcement:

“It is time for the silent majority in this country to respect law enforcement. There are a few bad apples in every profession. That does not mean that there should be open warfare declared on law enforcement,” she said. “The vast majority of officers are there to do the right thing, are there because they care about their community and want to make it a safer place. What happened last night is an assault on the very fabric of society, it is not anything we can tolerate. It is time to come forward and support law enforcement and condemn this atrocious act.”

Of course law enforcement officers’ lives matter. Of course black lives matter — as do all our lives. If we fall into the trap of keeping score and responding tit for tat, we will be marching down Charleston killer Dylann Roof’s path to an all-out race war.

Slowly information about Miles is coming out. He has a criminal record, a history of mental illness and spent some time in a homeless shelter. That still doesn’t tell us why he so cold-bloodedly gunned down a man who didn’t know him or see him coming.

It was as cowardly an act as the point-blank shooting last December of two officers sitting in their patrol car in Brooklyn. The killer had traveled to the city from Baltimore vowing to kill officers. He also killed himself.

That’s where reckless rhetoric can lead — to irrational people seeking revenge. As the D.A. said, this atrocious act must be condemned.