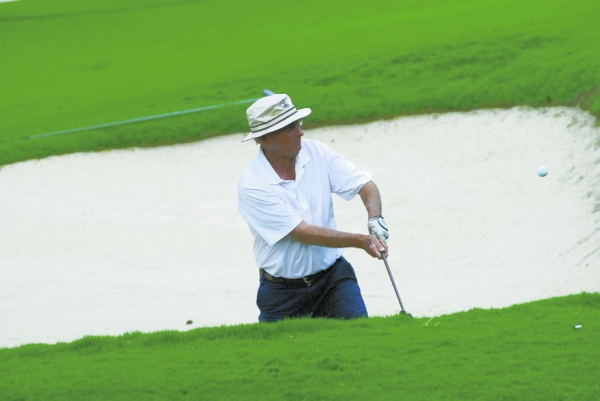 Bob Rusher comes out of a sandtrap at the 18th green on Sunday at the Country Club of Salisbury, during qualifying for the annual Crowder/Dorsett Labor Day 4-Ball Tournament. Dennis Davidson/Salisbury Post

Qualifying concluded on Sunday and seedings have been set for the 62nd annual Crowder/Dorsett Labor Day 4-Ball Golf Tournament at the Country Club of Salisbury.

A total of 119 two-person teams will see action in next weekend’s event, beginning on Saturday on ending on Labor Day, Sept. 7.

The Men’s Open championship flight will feature 16 of the teams, some of the top golfers in Rowan County and the local area.

The rest of the Men’s Open Division will have 10 flights of eight teams each, all crowning a champion.

Top-seed and defending title holders of the championship flight, Charlie Graeber and Michael Childress, did not have to qualify but were on hand on Sunday to check the pairings when they were announced. Graeber and Childress will play the No. 16 seed, Glenn and Roy Dixon, who carded a 69 while qualifying on Sunday.

“It’s always a relief to not have to qualify, but the scary thing is that you don’t want to get lazy about playing golf,” said Graeber. “So, we’re going to play a lot of golf this week. But it’s fun, it’s nice to see everybody out here trying to get into the tournament … it’s neat to watch it and know that you’re already in.”

Graeber has been in the Labor Day finals three times, winning twice — last year with the 15-year-old Childress and in 1995, with Joey Rusher. He knows that this year’s field is as strong as ever.

“You can look at the championship flight, first flight or even the second flight, and see some of the strongest golfers in this county,” said Graeber. “So, anytime you’re in that top 16, you’ve got to really be ready to play each time out. There’s not going to be an easy match, at least on paper, anyway.”

A lot of the field, like Childress, is very young, a fact not lost on Graeber, a long-time member of the club’s golf committee.

“It’s really something, because now I’m one of the older guys, but I don’t really remember this many young players who are this talented,” added Graeber. “That’s great for Rowan County. It’s a tribute to the high schools and the golf courses because they’re really pushing golf and it shows.”

As far as his partner goes, Graeber admits that Childress is “the better ball striker, but I can teach him a thing or two about the mental game,” he quipped.

Childress, a sophomore at Cannon School, has logged a lot of rounds in some big tournaments since last Labor Day. He has competed in the Rowan Junior Amateur Open and N.C. Junior Amateur. And the Labor Day tournament is on his home course.

“I’ve definitely matured physically and I would like to believe, mentally, as well,” said Childress. “With all of the events that I’ve played in this year, I know how to play tournament golf, but the atmosphere at the Labor Day is different, but in a good way. It’s really special.”

Since the defending champs are the top seed, the qualifying medalist went to the team of Wes Cline and Tyler Mulkey, two Catawba College golf team members, who shot a 7-under par 64. Cline was a last minute replacement for Catawba teammate Jeb Bennett on Saturday. Cline and Mulkey will battle the 15th seed, Nick Lyerly and Michael Dorsett (69).

Lyerly, the 16-year-old state 3A champion from East Rowan High School, has already claimed the Horace Billings Rowan Amateur and the Rowan Junior Amateur this summer.

Also shooting a 64 and claiming the third seed was Kevin Lentz and Cole Buckwell. They will play the 14th seed, Drue Davis and Derek Lipe (69).

Ryan Honeycutt and Keith Dorsett fired a 65 and are the No. 4 seed. That duo will play 13th-seeded Stephen Carroll and Walker Cress (69).

The No. 6-No. 11 seeds match-up will feature Richard Cobb and Robert Jordan (67) against Christopher McCoy and Frederick Corriher (69). McCoy and Corriher won the Labor Day event in 1994 as 17-year-olds. McCoy won again in 1999 with John Murphy.

Seth Correll and Chris Nesbitt (67) claimed the No. 7 seed and will play the 10th-seeded team of Dwayne McIntyre and Brad Vinson (68).

Finally, the No. 8 seed, Josh Brincefield and Eric Mulkey (68) will go up against the No. 9 team of Chris Williams and Michael Swaringen, who also qualified with a 68.

Allison Adams and Grace Yatawara, the women’s defending champions, were also exempt from qualifying and are the top seed in this year’s event. Qualifying medalist went to the team of Kristi Laton and Phyllis Durland (72).

Likewise, the Senior Division champions from 2014, Craig Rae and Andre Resner did not qualify and will be the top seed. Medalists this weekend were John Henderlite and John Kyger (69). Henderlite is a three-time champion — 1975 with Bud Mickle and 1985-86 with Jake Alexander. Kyger also has a championship to his credit, playing with Johnny Kyger in 2008.

The Super Senior Division qualifying medalists and the top-seeded team is Steve Vail and David Roueche, who carded a 70.

See Scoreboard on page 2B for all qualifying scores. Country club officials announced that complete pairings and tee times for the tournament will be announced on Tuesday.