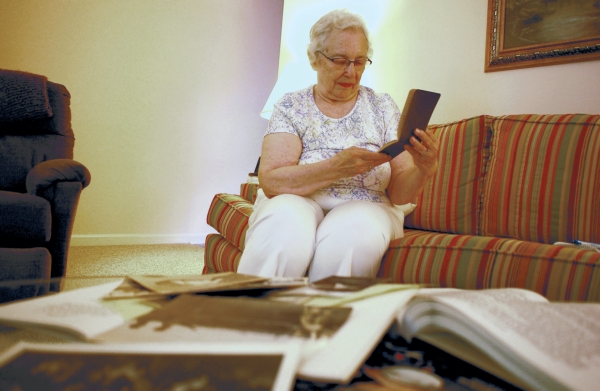 The tiny notebook he kept during World War II only confirms Anne’s observation. Near the war’s end in the Pacific, Bill was a young tail gunner on a B-29, and he flew 15 bombing missions over Japan.

Wilson says her brother’s diary would note the time of his missions, where and what the targets were, and the resistance his B-29, nicknamed “Piledriver,” met on those missions.

Once he noted: “Flew back on two engines.” Most airmen would find that a little scarier than Bill did.

Apparently by accident, Harter and the fellow members of his Piledriver crew “buzzed” a momentous event, the formal signing of the Japanese surrender on the USS Missouri. It happened on V-J Day Sept. 2, 1945 — almost 70 years ago.

On V-J Day, on its last mission, the Piledriver was the lead aircraft of more than 400 flying a display of force — someone dubbed it “Maximum Effort” — to fly over the Missouri. Because of the cloud cover, the flying armada could be heard more than seen from the battleship.

As the story is told in a history of the 39th Bomb Group, a book Anne Wilson keeps on a shelf at her home today, someone aboard the Piledriver said, “I sure would like to see Tokyo up close.” This comment came after they had flown high over the USS Missouri and Tokyo Bay in their show of force.

The crews had always bombed at night, so everyone wanted to see in daylight the destruction they had caused. As Commander Sterling Pile, for whom the Piledriver was named, steered the B-29 out of the clouds, the crew saw the city of Tokyo in ruins.

The book put it this way: “The firestorms caused by a multitude of incendiary raids had left only a shell. Everything that would burn was leveled and the concrete and steel skeletons were warped beyond repair.

Members of the crew started taking photographs, and after 15 minutes “of playing tag with Tokyo and its suburbs,” the Piledriver lost its orientation.

Without realizing it, the B-29 was heading back toward the USS Missouri — and flying at only 200 feet.

Like an American kamikaze, the Piledriver buzzed the signing ceremony, then quickly hightailed it out of there.

“For a fleeting moment (you) see the cherubic face of Bill Harter, the tail gunner from Salisbury, North Carolina, looking more amazed than the entire United States Navy, and the identification, P-32, as plain as the nose on your face,” the 39th Bomb Group history says.

How did Bill Harter, man of few words, describe this day in his log? His notation said only “flew over Tokyo Bay and went to 200 feet.”

You can imagine what the Japanese officials at the surrender ceremony were thinking. Was this one last bomb? And did the U.S. brass, which included Gen. Douglas MacArthur and Admiral Chester Nimitz, fear they had a renegade plane on their hands?

The Piledriver crew members thought they might be thrown into the brig, and those fears stayed with them on the long flight back to Guam. But none of the Navy men on the Missouri claimed to remember the number of the B-29, and none of the other airmen were talking, so the Piledriver crew avoided some harsh discipline.

Harter opted to stay in the service for several more months after the war and felt privileged to be a crew member on the Waltzing Matilda, a B-29 sent on loan to Australia to participate in a war bond tour.

In a history of the Piledriver, Harter stated the Australia tour was “a great event for me at the time.” He and the rest of the Waltzing Matilda crew visited every major city in Australia and several smaller cities.

Harter was honorably discharged from military service March 3, 1946, and headed back to Salisbury.

Anne Wilson says her brother Bill died in 1990 without ever sharing his wartime experiences with her. When Bill’s wife, Marian B. Harter, passed away, she left Bill’s papers and military books to Anne.

Wilson thought the 70th anniversary of V-J Day, which will be Wednesday, should not go without some mention, especially since her brother played an unusual role in it.

Harter grew up in the 700 block of Wiley Avenue.  He and Anne had a brother, Julian, who died of diabetes when he was only 15.

To give you an idea of how quiet or sparing of his words even a young Bill could be, Anne said he was stretched out once on the day bed at their grandmother’s home when he matter-of-factly looked up and reported, “Granny, your house is on fire.”

And indeed it was.

The family also liked to tell the story of Bill’s attending a family reunion when he was 5 and on the way back home telling his parents, “Those were right nice people.”

Harter graduated from Boyden High School when it was still 11 grades. He attended Catawba College for two years, but in June 1943, when he was 18, he was drafted and joined the Army Air Corps.

“I’m sure Bill had never been on an airplane before,” Anne says.

After basic training, Harter was sent to the Aviation Cadet Program in Knoxville, Tenn., but the school closed down, because the military had enough pilots. So Harter was sent to the Aerial Gunnery School in Panama City, Fla., crew training in Alamogordo, N.M., and then to Salina, Kan., where he joined up with the crew of the Piledriver.

Bill would marry Marian July 2, 1949, and he worked for Security Bank in Salisbury for 35 years, serving as senior auditor and corporate secretary. The couple never had children, and Bill was only 64 when he died.