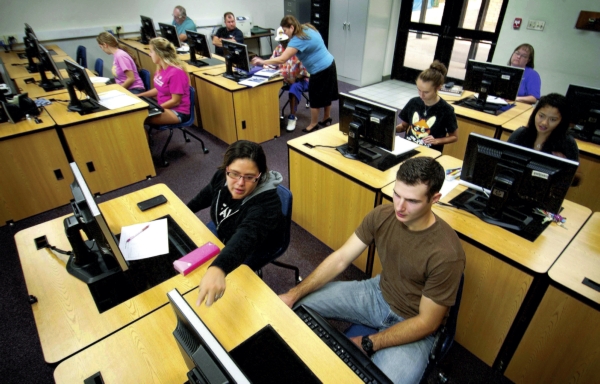 JON C. LAKEY / SALISBURY POST Karli Stoops (left) and Nathaniel Carl work on their logo designs that they are creating for their class on Marketing. Rowan Cabarrus Community College Instructor Karen Lynden teaches a class on the Introduction to Marketing on the school's North Campus. The class was learning how the designing of logos help in the branding process for a product or service. Wednesday, August 26, 2015, in Salisbury, N.C. Last October, Patrick Magna found himself at a crossroads in life when he lost his job as a warehouse manager.

Up until then, the 47-year-old said he’d always had job opportunities right in front of him.

He joined the Marine Corps right after he graduated from East Rowan High School in 1986. After nearly 10 years in the service, he quickly found a job working in a warehouse upon his return. After 20 years, he rose through the ranks to a management position and had reached his maximum potential in the warehouse industry.

“I wanted to feel out what I wanted to do,” he said. “I thought maybe I needed to find a new skill.”

Magna decided it was time to finally to go to college, and after visiting Rowan-Cabarrus Community College’s R3 Center in Kannapolis and perusing through the College Foundation of North Carolina’s website, he decided to explore his interest in radiography.

Magna said he felt he could play to all of those interests with a job in radiography.

“There’s algorithms in radiography,” he said. “You’ve got math, physics and biology all mixed in.”

The “endless opportunities” of the medical field also appealed to him, Magna said.

He began working on his math prerequisites in March, and this semester Magna began Rowan-Cabarus’ radiography program.

“When I took my anatomy class last summer, I was hooked,” he said.

Magna said the beauty of radiography is that there are so many different specific areas within the field, such as mammography, CT scans and radiology.

He said entry-level positions in radiography are fairly comparable to what he was making in the warehouse.

When he graduates, he will be able to make more than he ever could in the warehouse, and will have potential to move up and specialize his skills to earn more money.

“Where I was limited in the warehouse industry, I’m limitless,” he said.

Like many others, Magna realized that his earning potential and quality of life were at a standstill without a college education.

Jeff Bowe, director of Catawba College’s School of Evening and Graduate Studies, said that most applicants for the evening studies program want “to improve their life going forward” and “to broaden their options.”

“Often time they find they’re limited in how far they can advance in their current job or their field,” he said.

“Education is not an expense. It is an investment,” she said, “It always positions you for advancement.”

Spalding added that statistics show that it is a worthwhile investment

On average, the high school dropout’s average annual income is $20,493. Those who graduate high school can expect to make $29,377 on average.

On average, those with some college coursework or an associate’s degree will make $30,878 a year. Bachelor’s degrees bring average annual earnings up to $41,804, and those with advanced degrees make $51,894 annually on average.

Not only does the average salary rate increase with each added level of education, but it helps individuals find and retain jobs.

Bowe said that the average age of student in Catawba College’s night program is 38 years old.

“People think they’re too old,” he said, but added that it’s actually a “great investment.”

The work required of those with higher education degrees is “less physically taxing,” he said.

Education is the one investment that can never be taken away from you, Spalding added.

“We have a big commitment to returning students – people who may not have been able to get higher education right after high school,” she said. “Education is a stackable credential. We train people for the future.”

Spalding added that many of the degrees earned at Rowan-Cabarrus can transfer into the beginning coursework for four-year degrees at a number of North Carolina colleges.

The medical and welding fields are “hot” right now, she said, adding that they offer high paying jobs.

By completing a college degree, potential employees bring more to the table than just technical ability and knowledge.

Completing a degree shows that a student has stamina and determination, and that they have likely developed critical thinking skills.

“Students don’t realize it yet, but it’s practice for real life,” Perry said. “The more you put into your work and activities in college, the more you’ll get out of it.”

A college education doesn’t just benefit the individual who earns the degree.

“Your future is better served if you have higher education because you’ll be able to get higher paying jobs,” Spalding said.

Those who have higher paying jobs, spend more money in their local area, which creates more jobs in the area and boosts the local economy, Spalding added.

Mark Wineka mark.wineka@salisburypost.com SALISBURY — With their special wristbands and adventurous spirits, Cale Spenard and the rest of his crew planned... read more