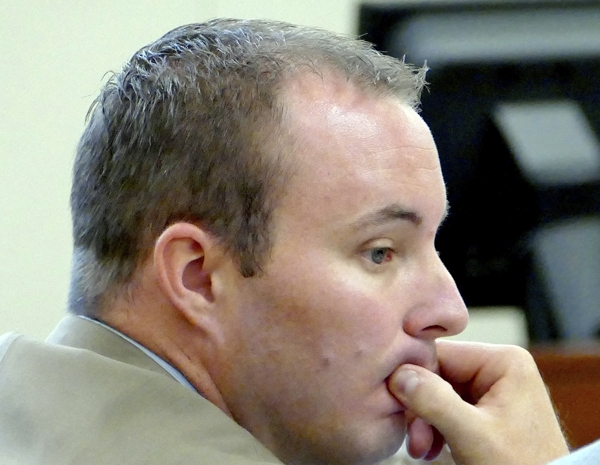 Prosecutors: No retrial for white officer who shot black man

RALEIGH (AP) — North Carolina state prosecutors announced Friday that they won’t retry a white police officer who fatally shot an unarmed black man, saying that talking with jurors after the mistrial helped convince them they cannot get a conviction.

The jury deadlocked 8-4 last week in favor of acquitting Charlotte-Mecklenburg Officer Randall Kerrick, leading the judge to declare a mistrial. Kerrick was charged with voluntary manslaughter in the September 2013 death of Jonathan Ferrell, a former college football player.

“In consideration of the jurors’ comments, the evidence available to the state, and our background in criminal trials, it is our prosecutors’ unanimous belief a retrial will not yield a different result,” Senior Deputy Attorney General Robert Montgomery told the Mecklenburg County district attorney.

Police say Ferrell wrecked his car on the morning of Sept. 14, 2013, and went to a nearby house and banged on the door, apparently seeking help. The resident called police, and three officers, including Kerrick, responded.

Investigators say one deployed his Taser without apparent effect on Ferrell before Kerrick fired 12 shots, 10 of which hit him.

Kerrick testified that he repeatedly fired because Ferrell kept charging at him and that he didn’t think his weapon was even working.

Prosecutors said nonlethal force should have been used to subdue Ferrell, who played football at Florida A&M University. The two officers with Kerrick didn’t fire their guns.

After three weeks of testimony and four days of deliberations, the jury couldn’t overcome its deadlock.

“Our prosecutors believe they were able to introduce the relevant evidence and examine the witnesses, including the defendant, appropriately and that the jury fully considered the details of the case,” Montgomery wrote. “However, meeting the standard of proof of beyond a reasonable doubt could not be achieved.”

The Ferrell family has settled a lawsuit with the city of Charlotte, receiving $2.25 million.

Kerrick has been free on bond. He is suspended without pay from the Charlotte-Mecklenburg Police Department.

“I think there are no winners or losers here, obviously,” Laughrun said. “It’s obviously a relief for WesKerrick and his family so he can now try to put his life back together.”

Jibril Hough, a spokesman for the Islamic Center of Charlotte and an activist on behalf of the Ferrell family, called the attorney general’s decision “heartbreaking news.” Hough said he had been on a conference call Thursday night with Ferrell’s relatives to discuss efforts to convince the attorney general’s office to retry the case.

“Two years later, Jonathan Ferrell is still looking for help,” Hough said, “and just like that September night after he wrecked his car, doors are being closed and people are refusing to give him the help he needs.”

It took two grand juries to indict Kerrick. The first refused to do so, suggesting prosecutors seek a lesser charge. But Attorney General Roy Cooper’s office, which handled the case, tried again. The 14-4 vote by jurors to indict met the minimum needed to keep the charge against the officer.

The Aug. 21 mistrial led to protests, as some demonstrators lay in the middle of the street soon after the trial ended. Dozens gathered that evening near Charlotte’s minor league baseball stadium as a game was in progress, and later some protesters walked through the city and shouted. Police officers stopped the protesters at one point from entering a covered transit center.

By Shavonne Walker shavonne.walker@salisburypost.com Police charged a Salisbury woman earlier this week after she allegedly sold drugs to an undercover... read more