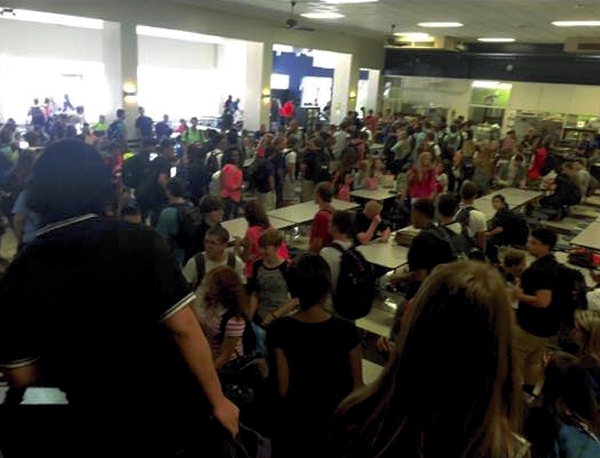 The first day of school did not go as planned for some East Rowan High students, a number of whom never ate lunch while others sat on the cafeteria floor during their lunch time.

Last year, students had four 30-minute lunch periods, which took place during others’ academic classes. Two of the three schools — East and South Rowan — implemented the new lunch schedules earlier this week, while West High plans to put the plan into place next week.

Parents say because of the changes to preserve Individual Learning Time, some students did not get to eat lunch Monday and others say their children sat on the cafeteria floor because there was not enough seating. Students sent cell phone pictures to parents and posted others on social media sites like Facebook and Twitter showing a crowded East Rowan cafeteria.

School officials, including East Principal Julia Erdie, admit the first day of school did not go smoothly, but say they are working toward a solution so that what occurred Monday won’t happen again.

South Rowan Principal Kelly Withers said the change to the schedule allowed for less disruption to the academic day and uninterrupted classroom activities.

Withers said there were some long lines Tuesday, but she said the first day is “always difficult.”

Withers said South Rowan officials have talked about ways to shift food services and will allow students to stay and finish lunch until they “work out those kinks.”

Diane Caldwell said she was upset about what occurred Monday, especially for students who, unlike her son Matthew, did not bring their lunches to school. Matthew, a 10th grader, told his mother his and other students’ lunchtime was “screwed up.”

He told Caldwell that although he got to eat his lunch, many of his friends did not eat on Monday or Tuesday.

“It alarmed me, and then I see these pictures. There was not enough room in the cafeteria. People were sitting on the floor,” Caldwell said.

She said what made her the most upset was the potential for what could have happened if there was a fight, an active shooter, a fire or other disaster at the school and the students crammed into the cafeteria had to evacuate.

Caldwell, like some other parents, learned of the change in lunch schedules earlier this week. Caldwell was one of about half a dozen parents who called or emailed the principal.

She said Erdie responded and told her Tuesday was much smoother. Caldwell was told by Erdie that if students needed to stay to eat on Tuesday, they could without facing penalties.

Caldwell said she sees the Individual Learning Time as a waste of time since many students don’t actually use it to study or work on projects. She said many students, including her son, bring school work home to complete.

Parent Adam Gregory said this year’s new schedule seemed “unorganized,” and his son was among the students who did not eat Monday for fear he’d be late for class if he stayed in a long lunch line.

“He also said that the cafeteria was so crowded that if you did get food, there was nowhere to sit. He said many kids went outside and in the hallways and sat in the floor to eat,” Gregory said.

Gregory said he believes the school is trying to “cram too many people into a lunch period” in order to maintain the Individual Learning Time. He said he’d rather students be able to eat and study at home like they’ve done in the past.

Gregory said many students, his son included, eat lunch and don’t get home until after 8:30 p.m. or 9 p.m. because of after-school activities.

Mike Julian’s daughter did get to eat lunch, but takes her lunch to school. Julian said he knows of some students who did not get lunch on Monday because there was nowhere for them to sit.

Julian said there’s no way students have enough time to wait in line, which officials said took about 15 minutes, eat and then have tutoring time.

Julian said he was not put at ease by school administrators. He said Tuesday was “a much better day,” but he wonders how long it will last.

Carla Linker’s daughter also packs a school lunch, but couldn’t find a place to sit inside the cafeteria in order to finish it. Linker said her daughter came home from school still hungry with only minutes to eat before heading off to work for an after-school program.

Erdie, the East Rowan principal, said a combination of things caused the long lines and crowding, including the fact that some students weren’t sure where to go. She also chalked it up to the confusion of the first day of school.

She said some of the time it took during Monday and Tuesday’s lunch periods also had to do with students having to “punch” in their numbers to purchase lunches.

Erdie said some of the students who did not eat on Monday got out of the lunch line because they were fearful of being late for their next class. She announced to students Tuesday that if the lines were long, they could stay to eat without fear of penalties.

Erdie said she also explained to students where they could eat besides the cafeteria, including the media center and outdoors.

On Tuesday the students went through the first lunch lines within 15 minutes, and the second lunch period within about 13 minutes, Erdie said. However some students and parents argue it took longer.

There are 1,040 students at East Rowan High, and on Monday and Tuesday, school officials say they sold 400 to 450 lunches each day. Additional lunch lines were opened on Tuesday. Erdie said Wednesday’s lunch time ran a little quicker because “everyone knew what they were doing.”

She also said Wednesday’s lunch time wrapped with some students done eating and returning to class before the bell rang.

She met with student council executives and school administration to come up with a plan to make sure the rest of the week was smoother. The East Rowan Booster Club has a concession stand at the school that will be split into serving hot lunches this week. East Rowan will serve hot lunches out of the concession stand for as long as needed, she said.

Rowan County Fire Investigator Mark Troublefield said the Fire Marshal’s Office received complaints about the cafeteria crowding via social media. He went to the school on Tuesday during lunch time to see for himself.

Troublefield said the capacity load for the cafeteria is 338 seats. He also said not all of the students who wait in line to eat actually eat inside.

“The seating capacity was never over the limit,” he said.