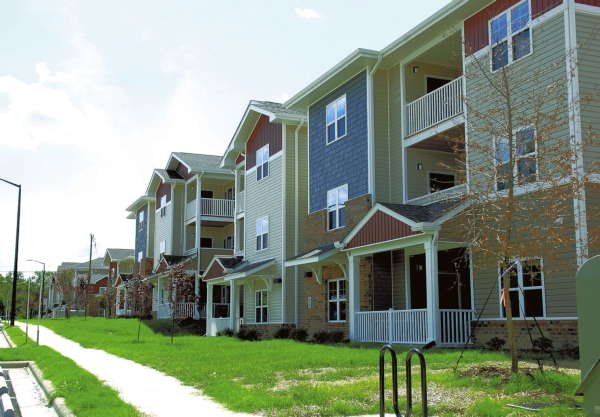 Bryant Housley says he enjoys spending time on the balcony of his new apartment at Brenner Crossing. Mark Wineka/Salisbury Post

“It has taken us five years, but it has turned out fantastic,” Sam Foust, executive director of the housing authority, said earlier this week outside of some of the new garden-style units.

The new apartments feature porches and balconies, wooden floors in the living areas, tile in bathrooms, open kitchens and a mix of exterior colors such as red, beige, taupe and blue mixed in with some brick facades.

They have a townhouse or condominium look to them and will be more energy-efficient by far, Foust said. “I couldn’t be more pleased,” he added.

Bryant Housley is a former Civic Park Apartments resident who already has moved into a third-floor, one-bedroom apartment at Brenner Crossing. It has a balcony looking out onto Brenner Avenue.

He said he has more space, and the development overall seems quiet, especially with the start of a new school year.

“And I’ve always wanted to live up high,” Housley said. “I think this is my favorite (unit). I go out on the balcony a lot.”

Nine public housing families already have moved into Phase I of Brenner Crossing, located along Brenner Avenue and divided by Standish Street. Once other certificates of occupancy are approved for the rest of Phase I, it will provide a total of 80 units — 36 public housing units and 44 affordable, tax-credit units based on a different rent structure.

Construction also will begin soon on a community building, which will include the management/leasing office for Brenner Crossing, a computer lab, exercise room, laundromat and multi-purpose room.

“That building, I think, is going to be a pretty busy place,” Foust said.

Once the housing authority closes on financing, construction on Phase II’s 90 additional residential units — townhouses and stacked flats — will begin. Before Phase II happens, the old Civic Park Apartments, which date back to 1953, will have to be torn down.

In addition, all new infrastructure — streets, water-sewer and other utilities — will be going in as part of Phase II. As those units extend back toward the existing West End homes, they will be not higher than two stories, “so we don’t overpower the neighborhood any more than what we’re already doing,” Foust said.

At an informational meeting Monday requested by Salisbury City Council candidate Constance Partee Johnson, Foust gave an overview of what was happening at Brenner Crossing and what impact it was having on former residents of Civic Park Apartments.

Johnson said some residents were concerned, nervous and scared about the changes, and she expressed thanks to Foust for his willingness to explain the process.

After the meeting, Johnson said Foust had made himself available for her questions and had been transparent and clear about Brenner Crossing. After she had spoken with Foust last Friday, she also wrote up and made available “10 facts” about the transition happening for Civic Park Apartments residents.

Meanwhile, Kenneth Lydell Muhammad El (formerly Kenneth Fox) has initiated an online petition on change.org calling for regional and national offices of the U.S. Department of Housing and Urban Development to initiate an investigation into unfair housing practices by the Salisbury Housing Authority.

In an introduction for the petition, Muhammad El said the housing authority is threatening to displace black families through gentrification, under the guise of HUD’s Rental Assistance Demonstration initiatives. He added a majority of black families who had been living at Civic Park are being victimized and will be displaced.

Foust is aware of the petition.

Foust has told Johnson and others that of the original 72 families in Civic Park Apartments and eight families in public housing units on Partee Street, roughly 60 will be living in Brenner Crossing once the entire $21 million project of two phases is complete.

Phase II probably won’t be finished until this time next year, Foust said.

All families in Civic Park  (and Partee Street) have been moved out and relocated to available public housing units elsewhere in Salisbury. They were guaranteed spots in Brenner Crossing as long as they remained qualified and in good standing with public housing — and wanted to move into the new units.

Foust said the housing authority has tracked each family who had to move from Civic Park. Over the months they’ve been elsewhere, some people have died, eight have been evicted from public housing, three have been judged as making too much income and several more people, up to 17, have said they prefer to stay on the eastern end of the city where they have been relocated.

Foust said 13 more former Civic Park families are in the process now of applying for Phase I units, while nine other families already are slated for Phase II.

The eight evictions of former Civic Park residents from public housing is not necessarily a high number, Foust said.

“That’s not irregular, unfortunately,” he added. Reasons for evictions can include things such as non-payment of rent, violence and drug activity.

Foust described it as representing two projects in one.

In public housing, residents pay 30 percent of their income as rent, Some adjustments to their income are based on things such as number of children and medical expenses. Rent charges fluctuate as income changes.

The rental charges in tax-credit units, designed to provide affordable housing outside the public housing system, are more stable. Renters have certain limits to their income — 40 to 60 percent of the median income in Rowan County, Moore said.

For a one-bedroom apartment, Moore said as an example, the renter of a tax-credit unit could not make more than $26,000 a year. As the number of bedrooms go up, the income caps also rise.

“Those rules are put together by the IRS, and they’re all around tax credits for the investors,” Foust said.

In 2013 and 2014, through the help of Laurel Street Residential of Charlotte, the Salisbury Housing Authority was the only housing authority in the state to win tax-credit authority to build affordable apartments. The N.C. Housing Finance Agency allots the tax-credit properties.

Phase I was awarded a $700,000 tax credit in 2013; Phase II, a $765,000 tax credit in 2014. The tax credits are sold to investors to cover more than half the cost of the development. Remaining costs are funded by subsidized loans from the state and the city of Salisbury, as well as conventional loans.

The combination of public housing with tax-credit, low-income affordable housing is a new model aimed at de-concentrating poverty. Foust said the overall goal is a purpose-built community with a holistic approach to neighborhood transformation.

A private company, S.L. Nusbaum Realty, is managing Brenner Crossing and operating out of an on-site trailer for now. Foust said because the housing authority is not expert on tax-credit properties, it preferred to have the private firm, though it left him with mixed feelings.

“We wish we were the ones moving them in and taking care of them,” he said of the residents.

Brenner Crossing eventually will have two playgrounds and a tot lot. Foust also would like to see the West End neighborhood in general have a new pre-school and a redevelopment of the old Monroe School.

Foust said the name, Brenner Crossing, was a business decision. The developers wanted something that gave a location, plus represented a sense of newness.

“A fresh start was what were were looking for,” Foust said.

Housley, who already has moved into Brenner Crossing, lived temporarily in an East Horah Street unit until his new apartment was ready. He said his Brenner Crossing rent is actually a little lower than it was before.

“I like it a lot better,” Housley said, “but it seemed like it was going to take forever to get over here.”