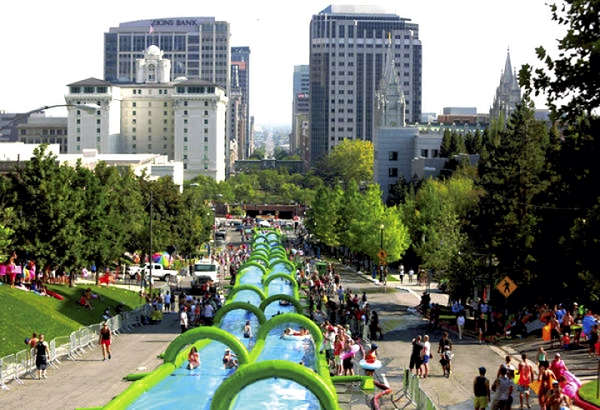 Slide the City brings its 1,000-foot-long water slide to downtown Salisbury on Saturday. Photo courtesy of Slide the City

In cities across the U.S., Slide the City has transformed streetscapes into lengthy water slides. On Saturday, it’s Salisbury’s turn.

Slide the City events center around a 1,000-foot-long traveling water slide. Salisbury’s event Saturday will close a section of South Main Street from Fisher to West Thomas streets. The slide and vendors will fill the space where cars usually roam. The Slide the City event is scheduled from 10 a.m. to 7 p.m.

Last week’s statistics showed about 1,500 people had purchased tickets for the event. Tickets purchased for Winston-Salem’s Slide the City — canceled earlier this month because of low ticket sales — will be honored for admission to Salisbury’s event, according to Downtown Salisbury Inc Promotions Director Mollie Ruf.

The type of ticket purchased dictates when and how many times participants can slide.

Ruf said six food vendors are scheduled to attend the event. Bounce City, located in downtown Salisbury, will provide a kids’ area for children who don’t meet the height and age requirement for the water slide. Slide the City’s website says participants must be older than 5 and taller than 46 inches.

The registration tent for Slide the City will be near the Salisbury Business Center at the intersection of South Main and Bank streets. The slide will start near the building, Ruf said.

Ruf said shuttle buses have been arranged to run from West End Plaza, the former Salisbury Mall, to downtown and the Salisbury Civic Center to downtown. All shuttle bus trips, including those not headed to Slide the City, will be free, Ruf said.

Tickets for the event are still available on Slide the City’s website.

Tickets will also be given out during College Night Out on Thursday, Ruf said.