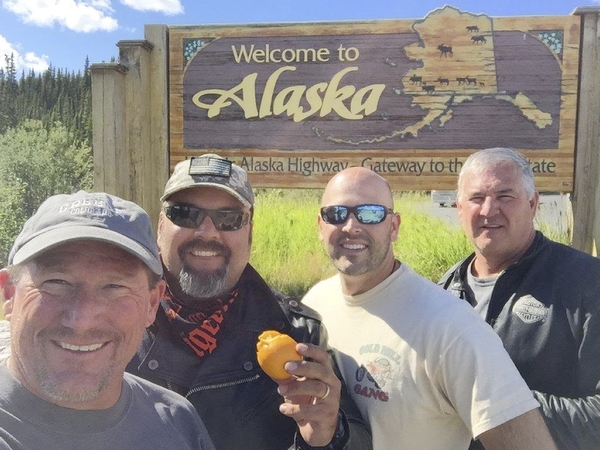 Wright realizes dream of riding motorcycle to all 50 states Mike Wright on his motorcycle with the Alaskan Pipeline in the background. Submitted photo

To say that Mike Wright enjoys touring the United States would be an understatement. In fact, entering this summer, he had seen so much of America by motorcycle since 2001 that only four states remained.  Wright had been planning a ride to Alaska since 2008, knowing that this would be the hardest state to add to his touring total.

Other trips had sharpened Wright’s traveling skills, and he had a solid and experienced group of friends willing to ride along on his quest for the 50th state. Previous trips had included all but Idaho, Washington, Oregon and Alaska.

“This was my Final Four,” Wright said. “It was time to get them done.”

After a 2008 discussion with friend and fellow rider Alistair Stanton of Leesburg, Virginia, Wright knew that he would eventually ride to Alaska, and he also knew that it would be an incredible physical challenge. To prepare for a ride of such distance, Wright began working out regularly.

“I was worried most about mental exhaustion and knew that I would have to ride back after reaching my goal,” he said. “I set about to prepare my body, mind and spirit.”

While preparing his body for the long hours of riding, Wright, an Ameriprise Financial Advisor, also prepared his office to operate without him for nearly a month. He worked with Stacy Jeter on procedures to stay in touch while expecting communication to be difficult in the remote sections of Canada and Alaska. Wright also arranged for other experienced help should the need arise.

Friends who would ride the complete route with Wright included Stanton, Mike Strauss of Ormond Beach, Florida, and Brent Shive of Rockwell. They left on July 11. Rachel Stevenson of Chicago, Illinois would join the ride en route. Strauss also was expected to complete all 50 states on this journey.

The quest for the remaining four states would come with Wright riding a 2011 Harley-Davidson Road Glide Ultra. Special attention was given to tires, brakes and other maintenance required for the very long ride on various and often poor road conditions, sometimes including rough gravel, large holes and damage done by frost upheaval. The group carried tools, patch kits and compressors on their bikes.

“Our rule is to ride your own bike,” Wright said. “Each rider in our group needs to decide how best to handle a breakdown or any other issue with their bike.”

The riders were prepared to camp at night if needed and carried tents and sleeping bags with them. They also carried at least a day’s supply of food and water just in case supply points were not available. The route in Canada and north to Alaska was very remote. The riders often went hours without seeing another vehicle on the roads. They had no cell phone service but usually found wireless Internet service available in their motels.

Gas for the motorcycles was a major concern while in the remote areas. All of the tanks would hold at least enough gas for 250 miles of riding. Stanton’s bike got better mileage and could go slightly farther. Only on one particular day did the situation almost get out of hand. Travel guides told the group that there was gas at a certain point.

“We found the gas station and the pumps, but the station was boarded up,” Wright said. “We knew we were in trouble because only one of the bikes could possibly make it to the next station.”

A resident came out to ask if they needed gas and directed them to an unsigned gas pump about 12 miles away.

The motorcycles passed through 25 states and the Canadian provinces of Saskatchewan, Alberta, British Columbia and the Yukon Territory.

As the group reached northwestern Canada and headed for Alaska and the Arctic Circle, the roads became much worse. So far, only a flat tire had slowed their progress. While on one of those remote roads, Wright watched others ahead of him bobble on the gravel, moments before Wright fought the gravel himself as momentum had him headed for a crash. Just before he reached a ditch, the bike righted itself enough to keep it upright while dropping into the ditch.

“I can’t believe how it ended,” he recalled. “The rear end came around just in time to let me avoid a serious accident. With the help of my friends, I was able to drive the bike out once we could get some traction. The only damage was a broken muffler clamp. It could have been much worse.”

The group took some time for sightseeing, with one of the most spectacular ventures being an airplane trip to Mount McKinley and the Pike Glacier. They flew from Talkeetna, Alaska, on a DE Havilland Otter ski plane that eventually landed when clouds opened enough to allow it.

Another highlight was fly-fishing the Kenai River. They hired a guide and boat and fished for salmon and trout while seeing eagles and bear. Later, the group rode the Dalton Highway to the Arctic Circle near Coldfoot, Alaska, where it was 77 degrees Fahrenheit and sunny, not quite what they expected.

In Fairbanks, Wright said, “We ate at a restaurant where I got the best barbecue of my life, better than Texas or anywhere. We had heard about Big Daddy’s and owner Harold Goetzman and didn’t leave disappointed. ” Goetzman has been invited to be a judge at the Bikes, Blues and BBQ event at Tilley’s Harley Davidson in September.

“There were miles and miles of pristine farmland,” Wright said. “I saw plenty of small crossroads with large farm equipment dealerships. Along the way, other wildlife included a mountain lion, elk, buffalo, moose and deer.”

Once, Shive and Strauss wanted to get some water and found that the case held 40 bottles, more than they could carry at once. A couple, Janet and Danny Huffman, offered to split the case with them, and everyone was amazed to find the Huffmans were from Hickory. Everyone was even more amazed to find that the Huffmans knew Wright’s aunt, grandfather and great-grandfather.

A scheduled stop on the way home was in Vancouver for a Rush concert. Strauss had transmission trouble and sent the others on ahead to get to the hotel and head for the concert. Strauss would follow as soon as the repair was made. Wright, Stanton and Shive checked in and took a taxi to the concert, but were especially surprised to see so many girls in their early teens in the area.

“There must be a whole new generation of Rush fans,” Wright thought.

Turns out the tired, jeans and boot wearing motorcycle riders had been dropped off at the venue for a New Direction concert.

“Mike Strauss was waiting for us in our seats at the correct concert by the time we got there,” Wright said.

When all was said and done, the riders had made the 12,228-mile trip over 27 total days and returned to Rowan on Aug. 5. Strauss also had now ridden in all 50 states.

Wright summed up the dream of a lifetime trip.

“At no point were we threatened, even though the bikes came home scraped and muddy,” he said. “There is such a big world out there. It makes me appreciate God’s creation even more — so peaceful, calming and mind-opening. If this isn’t living, I don’t know what is!”