Summer Reading Challenge wraps up with a bang 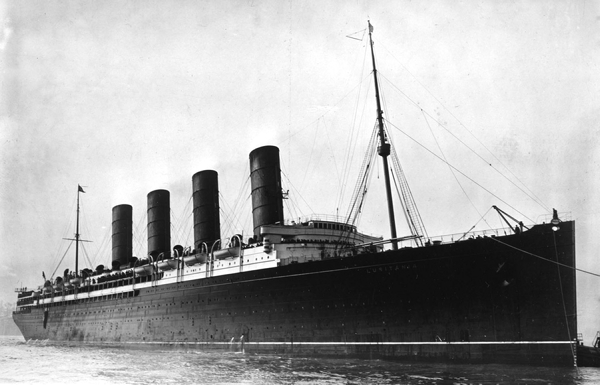 A photo of the Lusitania in port. Note the four stacks and the lifeboarts raised along the structure. The ship was 787 feet long and could make 25 knots or about 29 mph, making it one of the fastest ships on the sea.

A lively discussion wrapped up the 2015 Summer Reading Challenge last Tuesday night, with comments and questions shared all around.

Moderator Steve Cobb, part of the team that puts the Challenge together, was so enthusiastic about the book that he triggered other readers to share what they thought.

“Dead Wake: The Last Crossing of the Lusitania,” by Erik Larson, was the non-fiction selection for the challenge. Cobb, a math teacher by trade, is an amateur historian who’s wild about Theodore Roosevelt. Luckily, “Dead Wake” takes place at a time when Cobb’s obsession is still on the national scene.

The talk began with a little torpedo of its own as Challenge leader Jennifer Hubbard admitted she had not read the book — she’s in rehearsal for the St. Thomas Players’ production of “Calendar Girls.”

Her husband, Cobb, responded, “Spoiler alert! The ship sinks!” That warmed the group right up.

Cobb pointed out that Larson uses multiple perspectives to tell the story, from the Lusitania’s captain, William Turner, to the U-boat captain, Walter Schweiger. Larson is on board the Lusitania and underwater in the hot, stinking sub.

He’s with the passengers, he’s in Britain’s top secret Room 40. He’s at the White House with a distracted Woodrow Wilson.

Larson carefully describes the many lifeboats aboard the Lusitania, a response to the sinking of the Titanic, and then shows how most of the boats were useless once the ship began to sink.

Cobb read a short passage describing the conditions in U-20, far from ideal, with the smell of diesel fuel, old cooking oil, men who had not bathed in weeks and were swathed in leather, toilets that sometimes flushed back into the boat.

“In contrast,” Cobb said, “he tells you how luxurious the Lusitania is.” The only thing missing aboard the huge liner is a place to hunt game, “but everything else is there.”

Larson does a good job telling us about passengers aboard, like Charles Lauriat, who is carrying an original Dickens manuscript and irreplaceable original art work, all of which is lost.

“How different travel was then,” Cobb said. “These passengers could bring 20 cubic feet of luggage — huge, expandable suitcases, suitcases just for their shoes,” while today, we’re lucky to get a 16-inch bag in an overhead rack.

At this point, Germany did not want America in its war with Britain and other European countries, but then, Cobb said, they found such success with their U-boats, the order came to sink any and everything.

“They knew Wilson was a pacifist. He was re-elected on his promise not to go to war. Did they understand that?”

Then Germany “made a deal with Mexico to attack the United States that eventually forced Wilson to act.”

Reader Rachel Oestreicher Bernheim pointed out that Wilson was moved to go to war because his new wife, Edith Galt, had friends who died aboard the Lusitania. Still he didn’t do it right away.

“It seems Wilson let his love for Edith cloud or obscure his judgment,” Cobb said. Larson details the president’s lovesick letters to Edith, his deep depression at losing his first wife and his distraction from the job while grieving.

“Larson was tougher on Wilson and (Winston) Churchill,” said Betty McLean, than on some of the others who played a part in the tragedy.

How much blame should be placed on Room 40, the top-secret codebreakers in England, who knew the Lusitania would be a target, but did seemingly too little too late to save the ship?

Martha West agreed it was distressing that none of the information deciphered by Room 40 was used to help. Cobb pointed out that the British did not want to reveal how much they knew, but they were able to protect a dreadnought and other battle ships. “Passenger ships were on their own. That was clear,” Cobb said.

Bernheim pointed out that Larson paints an interesting picture of Churchill, who is in France at the time of the sinking. A letter quoted in “Dead Wake” is stunning, sent by Churchill earlier in the year. Churchill writes “it was “most important to attract neutral shipping to our shores, in the hopes especially of embroiling the United States with Germany.”

One of the problems with the Lusitania, Cobb reminded readers, is that warnings about its possible sinking were posted in newspapers before the ship set sail. “But no one took it seriously, or few did,” like the man who had a custom-made life vest aboard. Many of the passengers drowned because they had never been shown how to use the life vests.

“Was the sinking of the Lusitania a conspiracy?” Cobb asked the group. Mutterings of yes and no filled the room. “Was it intentional?” Cobb asked. That got a resounding yes from the readers.

Dottie Hoy pointed out that people believed the Lusitania was a “marvelous ship that couldn’t sink.”

And there was the mitigating factor that the Lusitania was loaded with ammunition and bomb shells minus detonators.

Bernheim asked, “Would that happen today?” Would a civilian mode of transportation be quietly loaded with war materiel?

“Did the Germans know that?” Cobb asked. Again, the readers said yes.

West said the British, ever polite, probably didn’t expect Germany to be so ruthless.

Bernheim wondered why “Dead Wake” was chosen — is it just a coincidence that “First Impressions” was all about researching the past and that Larson did a monumental job of research for this book?

It is, in fact, a coincidence, Hubbard answered.

Cobb took a few minutes to tie his favorite historical figure, Teddy Roosevelt, into “Dead Wake.” Roosevelt did not run for a second term, instead putting William Howard Taft forward as his candidate. But Roosevelt didn’t like what Taft was doing, so he ran again, against his own candidate and Woodrow Wilson. Wilson won. Angry that he no longer carried the power, Roosevelt issued a vitriolic attack on Wilson when the president did not immediately go to war after the sinking of the Lusitania. In a piece for one of the New York papers, he graphically describes the bodies washed ashore and the bodies of the dead in the Mexico attack.

“During this time, the sedition act punished people who spoke against the president,” Cobb said. “But no one was going after Roosevelt for that.”

Britain prosecuted Lusitania’s Capt. Turner for the sinking, trying to brush the blame off and to protect Room 40. The Admiralty blamed Turner for not taking actions he had not been ordered or told to take. Turner was found not guilty, but the once-proud captain was reduced to captaining an old ship carrying horses.

Hubbard asked those attending to think of ideas for next summer’s challenge, and said she’s sticking with what has been a successful formula, choosing a classic novel, a recent novel and a non-fiction work.

Send suggestions to Hubbard or to the Post, at news@salisburypost.com or to Summer Reading Challenge, Salisbury Post, PO Box 4639, Salisbury NC 28145.

Night at the Museums — a roaring success