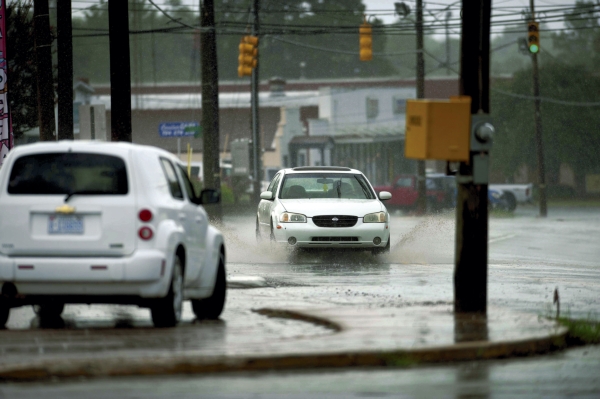 JON C. LAKEY / SALISBURY POST A thunderstorm passed over Granite Quarry on Wednesday afternoon darkening the skies and dumping a generous amount of rain that puddled in the roadway for several minutes. Motorists along U.S. 52 had to navigate the puddling storm water. Wednesday, August 19, 2015, in Granite Quarry, N.C.

Last week’s rain storms didn’t do much for drought

Storms dropped upwards of 1.4 inches of rain on Rowan County this week, but precipitation totals still fall below normal rainfall amounts according to the National Weather Service.

A majority of this week’s rain came on Tuesday evening. The U.S. Geological Survey shows its rain gauges in Rowan — on Statesville Boulevard near the Barber community and at the Piedmont Research Station —received most of the rain between 8:30 p.m. and 10 p.m. on Tuesday, according to the U.S. Geological Survey’s data. Both gauges received more than one inch of rain in that time period.

During the past week, it’s estimated the rain gauge on Statesville Boulevard received 1.4 inches of rain and the Piedmont Research Station’s gauge received 1.6 inches. USGS rain gauges near Lexington show totals of 2.26 inches and 3.02 inches of precipitation at two separate locations in the previous week. A gauge near Mocksville received 3.47 inches of rain as of Friday afternoon.

A severe drought now includes a swath of land from the border of Union County to Polk County.  The severe drought’s northern tip extends into Catawba County.

Weather forecasts show a chance of rain on Saturday with sunny, or mostly sunny, weather through next week.

Rowan-Salisbury names teacher and principal of the year