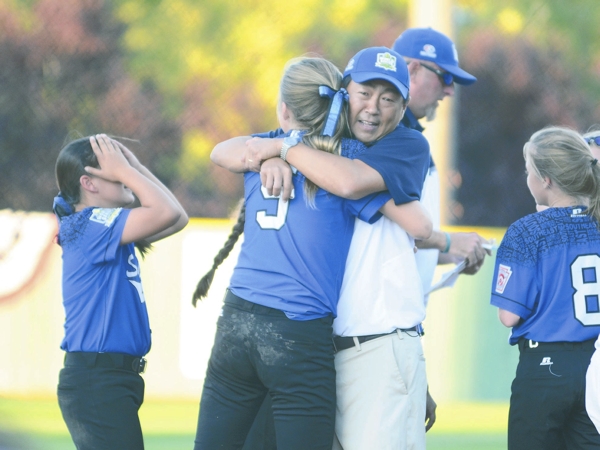 He has been asked countless times about the “tanking” of a pool play game by the West region champ that has received coverage from the British Broadcasting Corporation to the New York Times to the ESPN talking head shows.

Still, Yang remains humble and deflects the credit to the girls on the team and assistant coaches Rob Hales and Eric Dowling. On Wednesday morning, Yang posted a thank you to the hundreds of well-wishers on his Facebook page, saying “good players make good coaches. I’m just a dentist.”

Any successful athletic program from the pros on down will tell you that one of the most important keys to success is continuity. The Rowan Little League coaches have that, having been together the last four years.

“We’re really like co-coaches most of the time,” said Yang. “We rely on each other and most situations that come up are group decisions. And we get along great on and off the field. We’ve become close friends.”

Yang said that he and Hales handle most of the organizational chores while Dowling is more of a players’ coach. That makes sense, as Dowling is the dugout coach during games when Yang is in the third base coaching box and Hales is at first base.

According to Hales, he handles the infield, Dowling coaches the outfielders and Yang handles the offense and calls pitches.

Hales and Yang reverse roles with their travel team, the Rowan Razorbacks. Hales is the head coach of that squad and it’s where the two first teamed up.

“We’ve been with most of these girls since they were 8 years old,” said Hales. “Seven of them play on the Razorbacks and Steve and Eric help me with that team. Steve has been the coach of the Little League team for four years and it has all really worked out great.”

Hales, as most coaches, is optimistic and positive most of the time. But even he admits that a world championship was not expected.

“Honestly, we had confidence in these girls, but you never think it can happen — that you can get all the way here (World Series),” said Hales. “You have to be good as a team but also, have a lot of things go your way at the same time.”

Hales got a little TV time himself during Tuesday night’s semifinal win over Texas. Rowan pitcher Kali Morton, leading 8-0, was struggling to finish off the Southwest regional champs.
Two walks and an infield single loaded the bases for Texas. There were two outs and while the outcome was not in jeopardy, Morton was tiring after 100 pitches and appeared a little rattled.
“I was a nervous wreck in the first inning and the last inning,” Morton confirmed afterwards.
Hales went out to the mound, even though he says he’s not really a pitching coach.
“Most of the softball pitchers this age have their own year-round pitching coaches,” Hales explained. “They say that I have a calming effect on some of the players, including Kali. I just told her to relax, that you have a big enough lead to just throw strikes and let your defense help you.”
It worked.
Morton fanned the next batter for her 12th strikeout and Rowan was on its way to the championship game, which it won Wednesday night over Rhode Island, 4-2.
Hales and Dowling have indeed enjoyed the ride the last two weeks but as soon as the team returns to Salisbury on Thursday, it’s back to work.
Dowling works for United Beverages while Hales is a P.E. teacher and baseball coach at Southeast Middle School. “I’ll be in meetings at school on Friday morning,” said Hales, who’ll now walk into work as a world champion.
For many years, Hales and his wife, Nicole, operated Kidsports, just off of South Main Street. Nicole is now assistant principal at Woodleaf Elementary School, a new position for her after teaching at Hurley Elementary. In fact, Nicole left the World Series on Sunday night in order to be on the job at Woodleaf on Monday morning.
Nicole watched the last two games at a viewing party at a friend’s house.
All will be reunited today, with a world championship in hand.