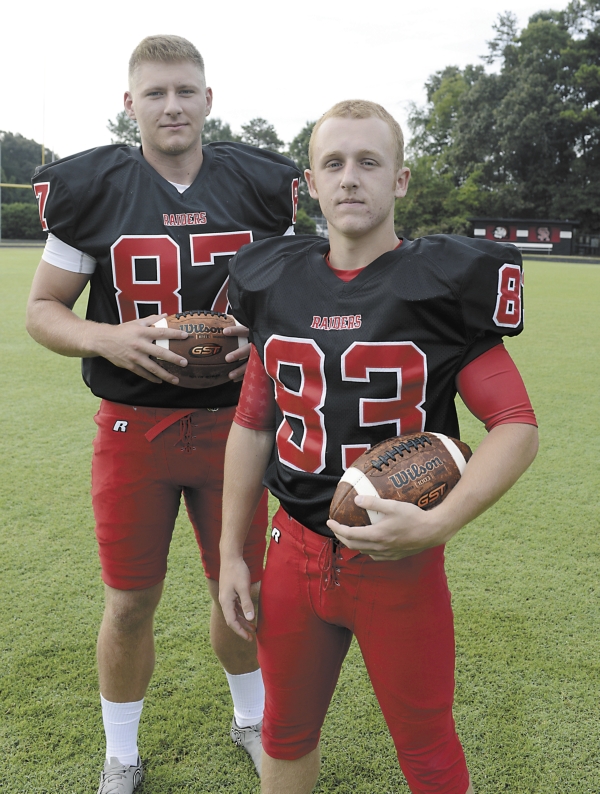 LANDIS —The spotlight, dark for so long, has finally settled on South Rowan’s impossible-to-ignore kicking game.

Seniors Brennan Lambert and Marshall Long were beacons in the darkness for the 3-8 Raiders last season — and they won’t be overlooked this year.

“They’re always going to be a factor,” said Daniel Yow, South’s first-year head coach. “So much of this game is about field position and they’re the best at what they do, so you can’t argue with that.”

Lambert and Long seemingly go together like the laces on a ball. Both were named all-county and all-SPC a year ago, when they shared the Tommy Barnhardt Award given annually to South’s top special teams player. What’s more, they serve as each other’s long snapper.

Lambert, a 5-foot-7 kicker extraordinaire, was as reliable as a Die Hard in 2014. He converted 19 of 20 extra-point attempts, half of his six field goal tries and even caught a 24-yard touchdown pass from Austin Chrismon in a mid-season loss against Carson, accounting for 34 of South’s 151 total points. Just as important, he air-mailed 80 percent of his kickoffs for touchbacks and is primed for an even better encore this fall.

“Everything feels right,” Lambert said. “Like it’s going to be a much better year. I’m amped up, ready to go.”

That could mean trouble for the rest of the South Piedmont Conference. Lambert always had a strong foot — he split the uprights from 43, 37 and 35 yards last season. Now that he’s spent the summer lifting, training and attending college camps, he’s become more of a weapon. He’s drawn interest from Catawba, Gardner-Webb, Western Carolina and Campbell.

“He’s found himself,” Yow said. “Kickers like Brennan, who routinely force the other team to go 80 yards, don’t come along that often. We’re lucky to have him.”

Same goes for Long, South’s appropriately named punter. At 6-3 and 220 pounds, he’s got a linebacker’s body, though he’ll only see fourth-down action this season.

“I don’t put points on the board,” he said. “That’s not my job. But I can keep points off it. That’s always been my goal.”

Long did a top-shelf job of that last year, when he averaged 40 yards per punt. Included were two balls that traveled more than 60 yards each in a 20-7 conference loss to Central Davidson. In a victory over Northwest Cabarrus he boomed four punts that averaged 41 yards.

Since then there’s been no “off” in Long’s off-season. He’s traveled more than 6,000 miles attending camps and was recently named to play in the prestigious Army All-American game in San Antonio next January. He’s received college offers from West Point and The Citadel, but hopes to land at one of his top three choices: Clemson, Georgia or Virginia Tech. “I’ve been busy,” he acknowledged.

South fans are grateful for that. Together Lambert and Long give them something more than one of the state’s best kicking combos — hope.

“Brannen and I, we’re true kickers,” Long said. “That’s our focus. That’s all we do and we’re good at it. Hopefully that helps our team get more respect this year.”

It should. Yow knows he’s got a couple of studs in Lambert and Long. On a team that has to embrace and applaud every positive moment, they’ll provide many.

“I’m in a rare position,” Yow said. “They’re my best players but I hope I don’t have to use them a lot. Still, I know when we do use them, they’ll do good things for us.”