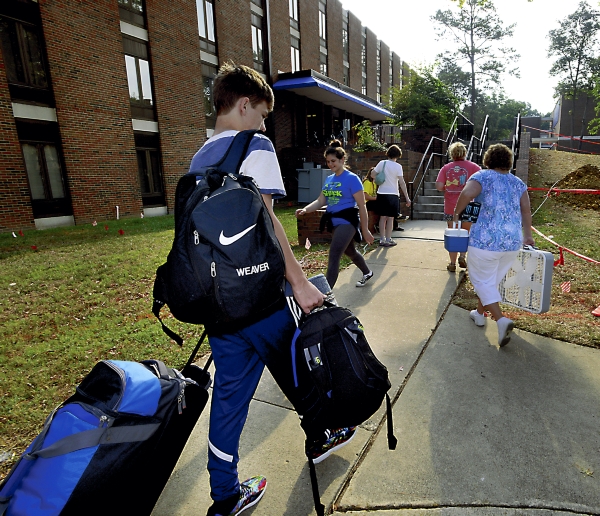 Freshman, Chad Weaver from Franklinton, carries a load of his bags into Woodson Hall on the Catawba College campus as freshmen moved into their rooms in 2015. Wayne Hinshaw, for the Salisbury Post

The Reid family spent the summer preparing incoming freshman Shelton Willett for move-in day at Catawba College. The 17-year-old took it all in stride while his mother, Nicole Reid, was a mix of emotions as her son picked up his dormitory room key inside the student center.

Reid said the family relocated back to Raleigh from Maryland. She along with a cousin helped Shelton unpack two cars filled with what she called just the right amount of first-year essentials.

“It’s so stressful. There’s a million different emotions — bittersweet, happiness — I’m proud that we’ve made it to this point,” Reid said.

Reid said they regularly checked CatLink, an online resource for students to check not only their schedules but what they’ll need to be move-in ready.

She expected the move to be fairly quick because Shelton didn’t pack any “extra stuff,” she said.

Shelton plans to study athletic training and said he appreciated his mother and cousin helping him with the move. He already knew the dorm size and that was a factor in how much he brought. Shelton said he plans to try out for the lacrosse team, a sport that he played for all four years of high school.

Madison Moore, another incoming freshman, traveled from Pilot Mountain with her father and sister. Madison, 17, said she’s attending Catawba to play on the college golf team.

Madison said she prepped for her move by getting rid of the old clothes she could no longer wear, which she gave to her younger sister. The move was pretty easy, Madison said, mostly because her mother is “very organized.”

Her father, Scott, said he thought she packed way too many things, especially since Madison’s dorm room is on the fourth floor. He said he believes Madison’s first year will be an “eye-opening experience.”

“I’m gonna miss them,” Madison said of her family.

Emily Owens, 18, of Reidsville, had already moved in but spent Saturday picking up a few simple essentials she’d forgotten. She arrived back at the dorm with her mother, sister, a family friend and Emily’s friend Darrin Vance, 18, who’d also already moved into his dorm.

Emily and Darrin moved into their dorm rooms on Monday. Emily is studying musical theater and Darrin will study theater education.

Emily’s mother, Heather, said it’s hard to let go, but she knows Emily will do great.

Darrin admitted he was a little homesick at first, but has already found some friends within his theater group.

“Catawba is like a big family. There’s all different backgrounds,” Darrin said.

He said he likes that the campus is a good size and not overwhelming.

Chad Weaver traveled from Franklinton with his mother, Lisa Margolis, for about two hours to get moved into his dorm. The two said they’d checked CatLink as well to make sure Chad had everything he needed.

Margolis said she expects Chad, who is an only child, to have some adjustments with his first year. Chad’s used to his own space, and his mother said having a roommate will take some getting used to.

Chad will major in computer science.

Doug Younts attended Catawba College some years ago and was a residence advisor. On Saturday, his son, Jacob, 19, moved into the same dorm, Woodson Hall, where his dad once lived. Jacob’s girlfriend also helped him move in Saturday. Jacob will study business.

Rowan stayed in contention to advance from pool play with a resounding 12-0 win against Philippines on Sunday in the... read more