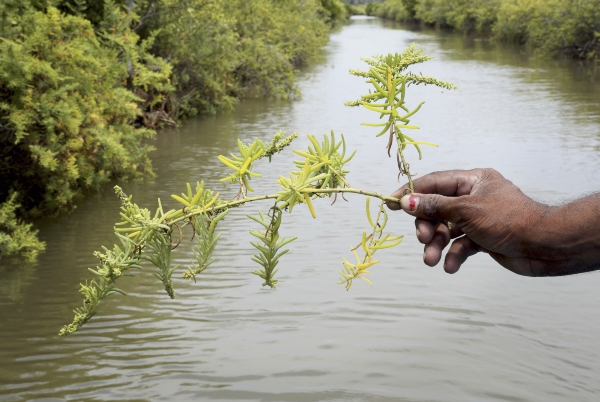 In this June 16, 2015 photo, an Indian villager holds a sprig of Suaeda maritime, said to be good for firewood according to scientists, grows in the wild within a mangrove forest on the coast of southern state of Tamil Nadu near Chidambaram, India. On a sun-scorched wasteland near India's southern tip, an unlikely garden filled with spiky shrubs and spindly greens is growing, seemingly against all odds. The plants are living on saltwater, coping with drought and possibly offering viable farming alternatives for a future in which rising seas have inundated countless coastal farmlands. (AP Photo/Aijaz Rahi)

The money was intended for poor families to help offset a spike in fuel prices. It remains unknown whether anyone on board survived the crash.

2. WHO FAVORS DEPORTING CHILDREN OF PEOPLE ILLEGALLY IN U.S.

GOP candidate Donald Trump says he would push to end “birthright citizenship” for the babies of undocumented immigrants living in the U.S.

Indian scientists are testing naturally salt-tolerant plants as one of the solutions to what they see as a fast-approaching agricultural crisis which threatens millions of poor subsistence farmers across Asia.

4. HOW 2016 HOPEFULS TRY TO STAY HEALTHY ON CAMPAIGN TRAIL

Scott Walker is counting steps on his FitBit. Jeb Bush swears by the Paleo diet. Bobby Jindal is a “gym rat.”

The explosions claim the lives of at least 114 people, with 70 still missing, including 64 firefighters and six policemen.

Through the tough struggles of the civil rights movement, he always kept his sense of humor, and it was his steady demeanor that helped him persist, the activist’s wife recalls.

The state has no comprehensive list to show how much work has been done or how much energy has been saved, the AP learns.

8. WHY AMERICANS WAITING LONGER THAN EVER TO BUY FIRST HOMES

They are struggling to save for down payments and facing delays in some key landmarks of adulthood, from marriage and children to a stable career.

A 30-year-old man who police say was in a relationship with Edena Hines is taken into custody at the scene — in front of her apartment on West 162nd Street in New York.

Jason Day delivers a record-setting performance at Whistling Straits that brought him a major championship he started to wonder might never happen.

Rowan weather: Rain in the forecast

Remember last week, when the prediction for this week was sunny skies and warm temperatures? Scratch that. It’s all changed... read more